You may have thought the all-business 4C sports car was an odd choice for Alfa Romeo to spearhead its return to the U.S.  But, it clearly makes the point that performance will be paramount as Alfa goes forward here. And before the sedans and crossovers start trickling in, they’ve given us one more treat to sample, the 4C Spider.

As we’ve already noted, the minimalist Alfa Romeo 4C is not for everyone. And chances are this 2015 4C Spider will also have limited appeal. But, those willing to take a chance on either, will be slipping into something special indeed.

In mid-engine drop-top roadster fashion, the Spider in the name refers to the removable roof panel. When you take it off, the resulting open air space above you may be minimal, but it only adds to the purely exhilarating experience of the 4C. 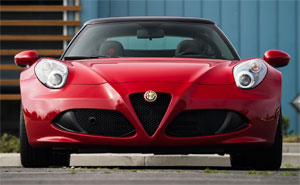 Actually, the standard cloth top is the definition of minimal and rather flimsy. While removal is step intensive, it’s not difficult. Best option, just keep it off and the car parked in the garage on rainy days.Or go for the optional carbon fiber hardtop.

Top on or off, once underway, the Spider feels plenty solid and secure. It’s also surprisingly quiet with the top on.

And no matter what is or isn’t keeping the rays off your dome, this car is still the only new car that delivers the “road rushing at you sensation” of 60’s era exotics.

It feels fast, but not struggling to keep it under control fast. Like most lightweight roadsters, it’s all about getting through corners quickly not necessarily making it to the next one in a hurry.

Keeping with the theme, the interior is equally unembellished, even resorting to a non-intuitive aftermarket Alpine which had no satellite radio, but did include Pandora.

Seats offer just enough comfort and there’s plenty adequate room inside to operate. Our taller drivers had a hard time seeing all of the gauges; which is a shame as they are pretty darn cool. 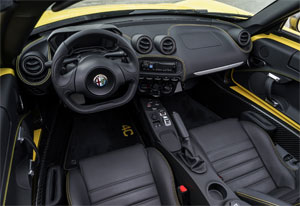 Oh yeah, there are things to nitpick, but barely, and in doing so you’re mostly missing the point of the car. There’s limited luggage space, though, unlike many convertibles, the top takes up very little of it.

While at just 1.7-liters of displacement, you might think the turbo power plant diminutive as well, but it has surprisingly more guts than the 237-horsepower number would indicate. And you’ll absolutely enjoy wringing all 258 lb-ft. of torque out of it.

Same as the Coupe of course, as are the 6-speed twin-clutch transmission and DNA dynamics selector, which allows you to choose between All-Weather, Natural, Dynamic, and Race settings. There’s no doubt it gets up to speed in a hurry, not exactly in a high dollar exotic car kind of way; more of a snarly tiny terror as it hits 60 in 4.3-seconds, just as in the only 22 lbs. lighter Coupe.

The gearbox shifts impeccably whether in manual or auto mode, and gear spacing is right on; with 3rd gear being the real workhorse. Despite an identical start, we managed to clear the ¼-mile a 10th quicker than the hard top at 12.9-seconds and 107 miles per hour. 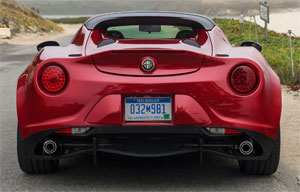 When you keep the throttle pinned in this car, all of your senses are fully engaged; the noises that it makes are truly magnificent. Steering is still fully manual, and the car stays flat as the proverbial pancake.

But that’s just the start of the overused clichés we’ll apply here… turns on a dime… handles like it’s on rails… feels like a go-kart… …pick your favorite.

Outside of the roof, nothing changes to the exterior design. It still has the ¾-scale “exotic Italian by way of Lotus” look that makes it a visual winner.

Standard staggered 17/18-inch wheels can be upgraded to 18/19’s; but keep in mind the performance tires can be a handful on wet roads, they also find every groove in the pavement. And since there’s a direct connection to the steering wheel, you’ll be clued in immediately.

Government Fuel Economy Ratings are the same as in the hardtop, 24-City, 34-Highway, and 28-Combined. We managed a very good 32.7 miles-per-gallon of Premium. So the Energy Impact Score is better than average, with 11.8-barrels of annual oil consumption with 5.2-tons of CO2 emissions.

If we didn’t already love the 4C enough, the Spider’s base pricing of $65,495 had us seriously contemplating refinancing our debt, finding a dealer, and putting some serious money down.

Back to essence, not necessarily back to basics, is what the 2015 Alfa Romeo 4C Spider is all about. It is not minimalism for the sake of it. But, it is maximizing driving pleasure by encapsulating the spirit of the 60’s exotics in modern hardware. A winning formula that more people need to take advantage of.