While the letter "M" may mean more to most BMW buyers, and certainly to us enthusiasts, it’s a new letter that may have more significance for the brand going forward, and that’s the letter "i". And while the i8 got the new brand-within-a-brand off to high performance start, it’s the mainstream i3 that will take bmw and perhaps evs to new heights.

The fact that BMW is making a car more deigned for commuter duty than driver excitement is quite a departure; making the 2015 i3 something truly unique. And since it’s not based on any other BMW, and aimed at a whole new group of buyers, engineers could take a few more chances in the design.

Clearly they took that freedom and ran with it, as the i3’s look is not at all like anything else in bmw showrooms, or on the road.

The modular chassis has two main assemblies; an all-aluminum powertrain-housing drive module, and the carbon-fiber passenger-encompassing “life module”. Together they deliver 3 series space, in a 1 series footprint, at only 2,860 lbs.

BMW’s kidney shaped grille is about the only thing that’s familiar outside. The rest is purpose-built to equally serve masters of aerodynamics and interior space. 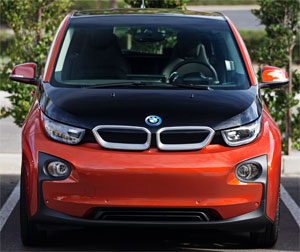 But to our delight, while the driving aspect is not as sporty as traditional bmw, it’s still quite entertaining, and easily beats the best among mainstream evs. The suspension is firm through corners, keeping body-roll in check; yet there is still decent ride quality for rough city streets.

There’s also plenty of the expected ev-power right from the get go. But, the i3 still feels exceedingly capable at much higher speeds; and not out of step on multi-lane highways like some evs. Very aggressive regen braking means actual use of the brake pedal is minimal. It’s a true “coast down” car.

Located in the drive module is a 22-kwh lithium-ion battery pack that provides energy to the electric motor rated at 170-horsepower and 184 lb-ft of torque.

BMW claims a typical 80-100 mile range; our observations were in the low end of that spectrum, yet “miles remaining” dropped slower than most evs. But, since “range anxiety” could since be a deal breaker, this ev has an ace in the hole; an optional 650cc 2-cylinder gas engine that kicks in to charge the battery and potentially double the range.

It only has a 2.5 gallon fuel tank though, so don’t think of it as extended range plug-in hybrid like volt; but as a pure ev with a gasoline safety net.

It all works out to government fuel economy ratings of 117-combined mpge when relying strictly on the battery, 39-combined mpg with the engine. So the energy impact score is superb, burning just 1.6-barrels of oil and emitting 0.7-tons of CO2 annually. 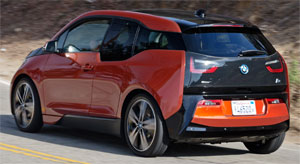 The gas engine also doesn’t wait for you to completely drain the battery. It kicks on as soon as the range drops to single digits. And when it cranks up you know it. but, rather than traditional engine sounds, it’s a constant generator-like high-pitched hum that reminds us of a CVT near the rev limiter.

But thanks to that range extender, we were able to get the i3 out to our test track, something that we normally can’t do with evs. Straight-lining, there’s a brisk tug off the line and a relatively quick sprint to 60 in 7.9-seconds, though it feels much quicker due to the silent whoosh of instantaneous ev power.  The ¼-mile slips by in 16.3-seconds at 86 miles-per-hour.

Through the cones, the rear-drive i3’s chassis is willing, but the grip on these skinny 155/70/19s is weak. Still, turns in are confident.

For such a lightweight, panic braking seemed a little long at 127-feet from 60. But the aggressive regen braking system actually triggered our test equipment before we stepped on the brake pedal. 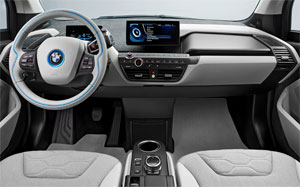 The interior of the i3 is also a departure from the BMW norm, where the look and feel is rightly futuristic, like the i8. Due to packaging, there’s a spacious feel and lots of open front floor space to stretch out. While a 2+2, with limited rear seat legroom, all seat cushions are very comfortable, and visibility is great all around.

Materials and switchgear feel solid and expensive, like a bimmer should. We were not surprised at the weight saving manual seat adjustments. But, not having either am or standard satellite radio, and no backup camera, were real downers.

Because, we know the i3 is priced like an ev, and for that matter a BMW ev, and not just a premium commuter car. Still at $47,200 before tax incentives, we don’t think it’s totally out-of-line. Drop the range extender and you save $3,850.

We understand that despite all the technology, great build quality, and fun nature of the bmw i3, it will still have limited appeal, mostly to well-off city dwellers. But, with its “iphone on wheels” cache, that BMW logo, plus a range extending gas engine option, the i3 is more desirable than any other small ev.