We’ve driven our fair share of BMW M cars over the years, and the M3 has always been our favorite. But now that the M3 is a sedan only, and there’s a new M4 coupe, do we have a new favorite? Well, our first attempt to find out was interrupted by some rainy weather. So here we are for take two, and it looks like skies are blue, and the road is clear.

JOHN DAVIS: Whether you consider this car, the 2015 BWM M4 or “the artist formerly known as the M3 Coupe”, doesn’t really matter; as anytime you get a chance to drive either, it’s a special occasion.

If said driving time happens to be at a challenging race track, like Roebling Road Raceway near Savannah, all the better.

By now, the new M4’s mechanical hardware is familiar; no more V8, it’s all twin-turbo inline-6 under the hood now.  With 3.0-liters of displacement, it pumps out 425-horsepower and 406 lb-ft. of torque to the rear wheels through a 6-speed manual transmission or our car’s 7-speed M-DCT. A carbon fiber reinforced plastic drive shaft and an Active-M rear differential complete the transfer of power.

Putting all of it to work and going full Donkey Kong on the front straight, with the DCT’s launch mode engaged, we hit 60 in just 4.1-seconds; followed by a 12.1-second trip to the end of a ¼ at 118 miles-per-hour. 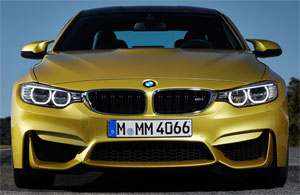 Power comes on in a hurry, and is relentlessly delivered throughout the voyage, along with automatic shifts that are brutal in a good way.

Indeed, transmission complaints were limited to the lack of a proper “park” position for the shifter. As some of our staffers couldn’t get used to just leaving it in gear, shutting it down, and waiting for park to engage automatically.

This M4, which of course shares it’s chassis with the now sedan-only M3, is the first generation to shed weight off of the previous gen., now coming in at 3,585-lbs.

Hitting the road course, the M4 quickly reveals itself as one serious piece of machinery, as it can be rough and almost abusive at times; feeling even more bred for the track than previous Ms. But that “50-shades-of-greyness” pays some serious dividends in “grip and grin” factor through corners, and loads of power on demand for launching out of them.

There’s a nice, heavy feel to the steering wheel; and the active rear diff allows you to plant pure muscle into the tarmac. M-dynamic mode of stability control promises to allow for plenty of fun before engaging, but in reality it has kind of an on/off intervention that seems to “push-me-pull-you” through corners.

We were very impressed with the M-DCT’s response when triggered manually; which is a good thing as when left in auto, it was rarely on the same page as most of our drivers. Brakes were used and abused for lap after lap, but showed absolutely no sign of it, with solid pedal feel throughout and no fade. 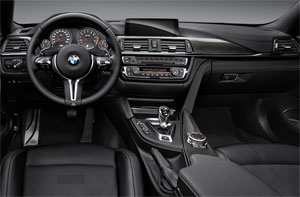 But, as great as the on-track experience is, the M4 is no longer leaps-and-bounds ahead of the segment; as rivals continue to improve and new contenders, like the Lexus RC F, emerge.

And when it’s not kicking 100% of your posterior around a race track, the M4’s hostile appearance, looks way “badder” in person than expected. There’s a very aggressive looking nose, weight saving carbon fiber roof, and a spoiler integrated into the rear deck.

Inside, things are sportier in both appearance and feel than ever; playing right into the hands of boy racers worldwide.

Which means the M4 is still not everyone’s cup of tea, maybe more Orange Mocha Frappuccino, as it’s still not a great daily driver.  But that’s mostly due to the serious nature of our car’s M-DCT transmission which we continue to find herky-jerky; especially from a standstill.

Now, if you are the type who would rather drive an M4 around in ECO mode, you’ll be happy to know that Government Fuel Economy Ratings are now 17-City, 24-Highway, and 19-Combined. Still, a worse than average Energy Impact Score of 17.3-barrels of oil used and 7.6-tons of CO2 emitted yearly is a reminder that this remains a high-performance car first and foremost.

Bottom line, regardless of the BMW name shenanigans, the 2015 M4 is one sweet, high performing ride. So, is it our new favorite? Well, it’s hard to say, as the M3 still has a special place in our collective hearts. But, one thing is sure, we certainly do love it! And maybe from here on out, when it comes to BMW M cars, we’ll just have to be 2-timers.