No matter how great of a sport sedan you make, if you want to be considered a legitimate rival to the European luxury performance brands, you have to also offer that same heady performance in 2-doors as well. So first it was the Cadillac ATS sedan, and now it’s this ATS coupe! At a track where we’ll see if less is still more.

Not only does this particular 2015 Cadillac ATS Coupe have two fewer doors than the ATS Sedan, but it also has two less cylinders than the V6 ATS Coupe that we tested a few months back. We knew from experience that Caddy’s 2.0-liter turbo would be perfect for hot laps around Roebling Road Raceway.

Two years ago we were whipping an ATS sedan with that very same engine around these very same corners with delight. And what we said about that ATS, pretty much applies to this ATS as well.

Starting with that 2.0-liter turbo I4, it still boasts some of the biggest numbers in the segment: 272-horsepower and 295 lb-ft. of torque. And just as in the sedan, it’s the only way you can row your own, with a fairly close ratio 6-speed manual transmission.

In addition to those elevated power numbers, there are some deflated numbers when it comes to heft, with a curb weight of just over 3,400 pounds. Less bulk and more power than the competition sounds like a recipe for track stardom. 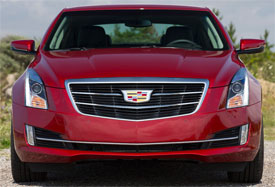 And indeed the ATS Coupe has an agile, tossable feel to it that is easy to love and provided more entertainment than even we expected. We also found it totally refreshing to have a car that you can push to its limits and have lots of fun with, without fear of getting too far over your head; as the impeccably balanced chassis is more than capable of handling the power.

Stabilitrak is there if you need it, and in Competitive Mode it allows you to drive very hard without it stepping in and killing the fun factor. The ATS rear-wheel-drive architecture, with 5-link independent rear and multi-link MacPherson strut front suspension, is a real gem.

The standard Brembo brakes worked great for the first few sessions, but as the laps piled up, so did the fade and soft pedal feel. No complaints about the manual shifter, however; very mechanical in feel; easy to be fast with. Though just as in the ATS Sedan, it took us a few laps to find our shift points; as there is virtually no engine sound in the cabin and a very soft rev limiter makes things challenging.

So, how does it compare to the benchmark BMW 4 Series Coupe? Well without-a-doubt, the performance is there, yet it still lacks some of the visceral feel of a Bimmer. This ATS is a performance car in drive, but a luxury car in personality.

But we understand that it still an evolving market for Cadillac and there’s plenty of time to really dial it in. Though truth be told most of their buyers will find it perfect just the way it is. 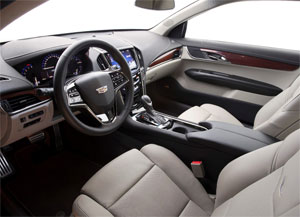 Overall, compared to our sedan’s track time here, the ATS Coupe still felt better in just about every way; upping our anticipation of getting behind the wheel of an ATS-V.

Still, having said all that; it’s doubtful that too many ATS Coupes will be seeing track time. And that’s just fine, as it is a very willing dance partner on familiar back roads as well; providing plenty of that expected Caddy comfort that encourages you to go find some new ones.

On straight ones, the ATS Coupe performs equally as stirring. Power is a little soft off the line, but builds quickly and in 6.0-seconds flat we zipped to 60 miles-per-hour. Two tenths faster than the sedan managed here. 14.3-seconds is what it took us to travel a ¼-mile’s worth of Georgia asphalt with a speed of 100 miles-per-hour.

And no matter how hastily or lazily you’re cruising, you won’t be lacking for luxury in the driver’s perch of the ATS Coupe. There’s a Euro-spec level of refinement to the cabin, along with high tech elements like Cadillac’s now-familiar, if still controversial CUE interface.

Things outside are familiar too, but not as radical as some other steeds in the Caddy stable. The stance is an aggressive one, especially at the rear; but most body panels flow more than curve their way from front to back.

Government Fuel Economy Ratings for our turbo-4 manual combo are 19-City, 30-Highway, and 23-Combined. So the Energy Impact Score is an average one, with annual oil use of 14.3-barrels and CO2 emissions of 6.4 tons.

Getting your kicks in an ATS Coupe will require spending at least $38,990. A track-ready Premium model will put you closer to $50,000. All-wheel-drive is available in both 4 and 6-cylinder ATS Coupes.

So to answer our cliché question, of course less is more, and just like most things moms say, like “life isn’t fair” and “you should know better” always ring true. The 2015 Cadillac ATS Coupe, and particularly in track weapon 2.0-liter form, knows exactly how to behave on both road and track, and is making the things unfair for the rest of the sports coupe competition.