Whether you’re talking high performance cars, or all-you-can-eat buffets; restraint is never easy. And, you’ll need to exercise a lot of it if you own one these 707 horsepower Dodge Hellcats, and want to hang on to your driver’s license. That’s why we’ve come to a place where we can unleash all of the evil that these hellions can deliver!

This pair of SRT Hellcats, a 2015 Dodge Challenger, and 2015 Dodge Charger, have a lot in common. But really, it’s what’s common under their hoods that is our interest here. Forget about Mustang and Camaro, these beasts have more power than a Z06, and even FCA US’s, or Fiat Chrysler Automobiles as the Chrysler Group is now known, own Dodge Viper. 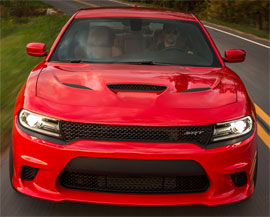 It’s a HEMI of course, and while its 6.2-liters of displacement is not the biggest HEMI in the stable, for the first time there’s a 2.4-liter supercharger on top of this orange-panted iron block; that more than makes up for any lack of displacement to the tune of 707-horsepower and 650 lb-ft. of torque.

Now, you might think that cramming this much oomph into a daily driver would destroy the daily driver part, but there’s little indication of its full insanity when you first fire it up.

No matter which Drive Mode you’ve dialed in, there’s a soft personality to these cars, a “smooth as Grandma’s Caddy” 8-speed automatic transmission, and 2 keys to choose from. Pick the black one and you’ll only get about 500 H-Ps of Hellcat wrath. Use the big boy red key, and you’ll have full access.

And of course that means no matter whether you’re “Charging” solo or “Challenging” a friend, exercising some of that restraint will be necessary if you plan on getting off the line with anything other than smoke and melted rubber.

Once you’re rolling, the power is delivered less abruptly, but no less forcefully; and we hit 60 miles-per-hour in just 3.8–seconds in the Challenger and 4.0-seconds flat in the Charger. 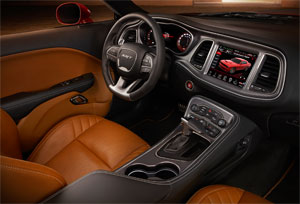 That ultra-smooth 8HP90 TorqueFlite transmission, with its beefed up internals, can also deliver shifts as quickly as 160-milliseconds, taking you to the end of the ¼-mile in as little as 12.1-seconds at 124 miles-per-hour. The Viper’s Tremec 6-speed manual is available in the Challenger only.

That makes the Charger Hellcat the most powerful sedan in the world. Plus, the Charger also cheats the wind a little more than the Challenger, so can achieve a higher top speed of 204 miles-per-hour.

But, while there is absolutely nothing to complain about when it comes to straight-line heroics, unleashing these two beasts on Roebling Road Raceway’s 2-miles of road course, showed that while not quite full-analog in a digital world, they are much more adept at destroying blacktop than clinging to it.

And while full Track Mode and Bilstein ADS dampers help when it comes to keeping things flat through corners and more capable than most buyers need; it never feels truly at home on a road course. 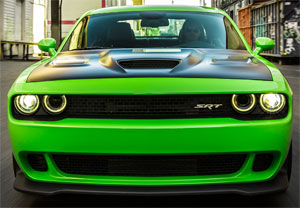 Factor in the 4,500-pounds of weight these brutes are saddled with though, and they feel more responsive than they probably should. And, thanks to the largest steel brakes on any production car, braking held up to the track task better than expected.

Outside of track work, and inside, these cars remain the roomiest and most comfortable of the muscle car breed. With full-size car space to spread out and even plenty of room for bringing loads of stuff with you.

The exteriors gets demonized with unique, non-cross haired front ends that are functional for both allowing more air in to cool things down and for making both cars look Hella bad. An exclusive hood with scoops and vents was also designed for airflow management. 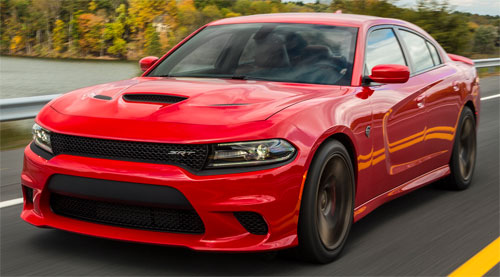 20-inch wheels wear 245 rubber both up front and in the rear; both cars sit about half an inch lower; and of course there are more prominent rear spoilers. Further touches from there are surprisingly subtle, with the Challenger boasting the more nostalgic look of the two.

We’re not sure if there are actually cats in hell, and why exactly they would come to earth bringing us 14-hundred horsepower’s worth of ungodly, road-going evil. But we say “here kitty-kitty; bring it on”!  The 2015 Dodge Challenger and Charger SRT Hellcats are indeed Demonic Dusters that will be making life for the competition a living hell for years to come.