No vehicle helped to make the SUV a required family friend more than Ford’s original full-framed Explorer. Indeed its enduring success allowed Ford to go slow to shifting to car-based utes, other than the compact Escape. But, for 2007 they gave in, and launched the mid-size Ford Edge. While not as rugged as Explorer, it still had solid sales. Now, finally, there’s a second gen Edge, and it’s new from corner to corner.

While auto writers use the phrase “all-new” a lot, the 2015 Ford Edge really is about as all-new as any vehicle can be, with very few parts carried over from the first gen.

Its stronger unit-body structure has a wheelbase that is 1.0-inch longer than previous, though track has been narrowed slightly. As for the suspension, a MacPherson-type strut with isolated sub-frame remains up front, but in back there’s a new integral link setup with coil springs that’s designed to shift ride quality in a sportier direction.

And indeed, we found that to be the case on the roads less traveled around Phoenix, Arizona. Ford’s Curve Control is still available, but thanks to the vastly improved chassis, it seemed less willing to intervene. 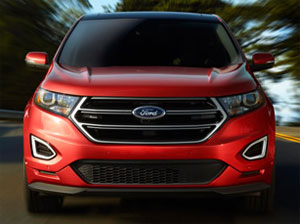 For those that wish to take it further over the edge, a Sport model returns and it’s even more proficient than before, thanks to additional suspension tweaks and standard 20 or optional 21-inch wheels.

All models are noticeably quieter inside, with very little-to-no wind or engine noise, unless you have the throttle pinned. Weight is down a tad, but not so much that we noticed it.

A good improvement overall, yet it’s still not as polished as many in this crowded segment.

The Edge does showcase much of Ford’s latest technology, like inflatable rear seatbelts, hands free lift-gate, Lane Keeping, and adaptive cruise control. A back-up camera is standard; with a 180-degree view front camera, with washer, available to aid in pulling out of blind places. Active park assist adds perpendicular help, and will even pull out of the spot for you when you’re ready to go.

The make-or-break aspect of any family vehicle however, is how you’re treated inside. Up front room is slightly more generous from before. And, the nicely supportive seats use thinner padding, so the environs seems even more spacious.

Additional soft touch material are well placed, taking both the look, and feel of the cabin a notch or two higher. There is noticeably more space for rear seaters too, but the Edge remains a 5-passenger crossover, saving 7-passenger duties for the also now unitized Explorer. 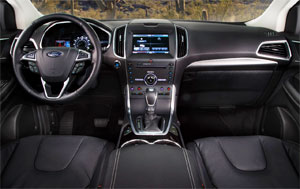 The exterior design is equally important of course, as few people want to be seen in an ugly ride; and here the Edge is clearly… …edgier. The previous gen’s rounded shape has been replaced with a more angular one; and while size has grown, the less bloated look makes it appear tidier.

For sun worshipers, the Edge has one of the longest sunroofs out there, with Ford’s Vista Roof taking up almost 4-feet of real estate.

Under hood property is occupied by 1 of 3 engines. Base is a 2.0-liter EcoBoost I4, and it’s technically a new engine, as it features a twin-scroll design that both improves efficiency and increases power. Horsepower is now 245; torque is also up by 5 to 275 lb-ft.

The naturally aspirated 3.5-liter V6 carries over, but its reprogramming results in slightly less horsepower at 280 and 250 lb-ft. 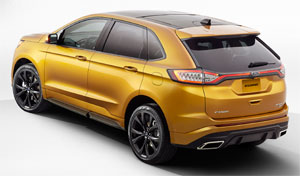 Fully automatic all-wheel-drive is available with any engine, and towing capacity remains at 3,500-lbs.

Now, we spent most of our early drive time with the 2-point-0, and came away pleased; with its nice, sharp throttle response helping it feel plenty stout. But we did find the standard 6-speed automatic transmission easily confused and quite busy. Sport mode didn’t seem to offer any relief.

Ford has obviously learned a lot about building crossovers, as the Escape and Explorer consistently rank among the top-10 in SUV sales. And, even the first Edge spent some time on the list. Well, now it just looks like Ford is getting greedy, as the really “all-new” 2015 Ford Edge will likely make a return to the top-10, and score a perfect 3-for-3 for the blue oval.