The 2015 model year is a big one for the Ford Mustang. Not only is it all new, but America’s original pony car is now fifty years young. And, we came away from our road test very impressed with the Blue Oval’s new steed. Still, that mostly street seat time didn’t allow us to fully explore this thoroughbred’s potential. What we needed was a place to really let the new Mustang run wild.

The Ford Mustang has been in production for just over ½ a century now, with a formula that’s stayed pretty much the same. With the exception of Mustang II, changes have been evolutions more than revolutions.

Well for 2015, Ford declared that the all-new Mustang would shake things up a bit, and take on the world; with European sport coupes in its sights more so than traditional muscle-minded domestic rivals.

The Euro-mission requires Euro-specs; so an independent rear suspension, and even turbo-4 power, become a bigger part of the big picture. All this has brought us to Roebling Road Raceway outside Savannah. It’s time to do some serious flogging of this V8 GT and see how the new “Stang” stacks up to past Mustangs, and more importantly to the current European competition. 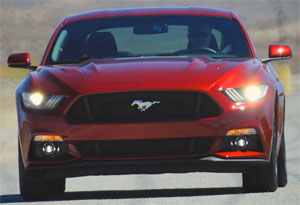 But we wanted a V8 for our track work, and a 6-speed manual with it, even though most buyers will go 6-speed automatic. Ford agreed and we’re glad they did because it’s the best shifter of any stock GT we’ve driven; very smooth, with nice short throws.

And while the GT V8 is heavier than a 4-banger EcoBoost Mustang, at 3,700 lbs., it’s still about 200 lbs. less than a comparable Camaro, if also heavier than a 4-series BMW. But with much improved chassis balance, you don’t have to come to fisticuffs with the V8 Mustang to get it through a corner politely. It wants to do it now.

The stiffer chassis and independent rear also help to grip the pavement more than just hop along it, though oversteer is still easy to find. Very nimble and forthcoming steering feel helps you stay on top of that.

Most drivers wanted a little more audio accompaniment inside the cabin; as at times on the track, it was hard to hear when the engine was requesting an upshift. 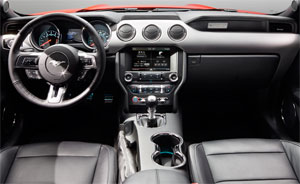 Off the track and on the street, the new Mustang feels even better. It’s far more comfortable, quieter, and the clutch is much easier on the leg.

But, lest internet haters get too riled up about the Mustang now being too refined, there’s still plenty of magic when you step on the throttle. And some rear end clunky-ness reminds you it’s not quite up to wine-and-cheese crowd standards just yet.

Straight-line prowess thankfully doesn’t change much. Power comes on quickly and a nice meaty hit of torque greets you approaching 4,000 RPM. At Roebling we hit 60 in 4.5-seconds; and cleared the ¼ in 12.9 at 112 miles-per-hour.

There’s no huge departure to the new Mustang’s exterior either. We’re glad the fastback is back. Debate continues about the front end, but it is very aggressive. Overall, styling is more modern, if still unmistakably Mustang.

And of course things are very modern feeling inside, even with a traditional twin-cockpit layout. There is a little more clutter to some of the switchgear, and while all loved the nice row of toggles, they could be placed higher for easier use. Gauges are also classically styled, but with plenty of data; including track apps with easy access to the GT’s standard line lock.

Government Fuel Economy Ratings for a manual GT come in at 15-City, 25-Highway, and 19-Combined. So the Energy Impact Score is still below average at 17.3-barrels of yearly oil use with CO2 emissions of 7.8-tons.

So, while there is a reason that better performing Mustangs like the Shelby GT350 are on the way, we feel the 2015 Ford Mustang GT does just fine, certainly better than any other GT to this point. All helping the Mustang fully live up to its world-class sports “car” promise.