By now there’s nothing secret about the 2015 Ford Mustang, or the fact that there’s a new Shelby GT350 right around the corner. But before we saddle up that high strung steed, and being that the current warm weather is perfect for it, we thought we’d take a more relaxed trot in the Ford Mustang GT Convertible.

Yes for 2015, Ford launched an all-new Mustang. One that brought more performance and better road manners; as well as improvements in both fuel economy and interior refinement to the original pony car.

Of course an all-new, more progressive look was part of the package as well, and while the sheet metal of this convertible Mustang may appear exactly the same as the hardtop; Ford had to massage most of the body panels to make that illusion happen. Top up, we found the results somewhat mixed.

The majority of that tweaking is in the rear naturally, where the trunk lid and rear quarters are significantly reshaped. Still, the sharper top just doesn’t integrate nearly as well as the coupe’s fastback. Top down, our objections disappear. 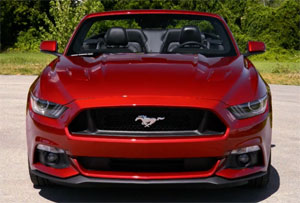 Thing return to nicely normal at the sleeker front end, with the big horse corral grille in center; flanked by slender headlights and signature 3-gill LEDs. Wheels on this GT Premium are 18-inch alloys, but some on our staff didn’t think the machined finish went well with the Ruby Red Metallic paint.

The top is insulated, multi-layer fabric. While power operated, there’s still a manual header release. The top forms its own tonneau cover with detachable side boots to cover hardware.

As for the 2+2 interior, not much changes from the Coupe; still the same well thought out blend of a classic layout with modern necessities.

The seatbelts do come out from the B-pillars much lower of course, and the seatback mounted retention loops leave little room for adjustment. While some of our crew found them uncomfortable, it varied widely from driver to driver.

And we’re not sure if it’s all of the additional light being let it, or the fact that interior quality from all brands seems to be escalating at a rapid pace, but materials don’t seem quite as impressive as they did when we tested the Coupe just last year. And, we still like to see the center stack toggles mounted higher.

Our tester also came saddled with the Select Shift 6-speed automatic. It works well, but there’s just not as much emotional connection to this car when the trans is calling its own shots.

Off the line, throttle modulation is the key; and once you get past 3,000 RPM things really start to get fun. We hit 60 in 5.2-seconds; with the ¼-mile passing in 13.5-seconds at 107 miles-per-hour. Both numbers about half a second off of the V8 manual coupe we tested before. 117-foot average stopping distance from 60 was great, but fade did start creeping in after 4 or 5 runs.

As for handling, once you get used to the Mustangs’ tendencies, with both over and under steer available, it feels smaller than its size and displays minimal body roll. Steering is direct, accurate, and has a nice weight to it.

Top down cruising at a more relaxed pace, we found wind levels to be quite acceptable. And except for some occasional creaking over bumps it proved to be a very pleasant driving car. No doubt it’s the tightest feeling Mustang Convertible yet. Still it falls short of most European convertibles; and there was a bit more cowl shake than expected. 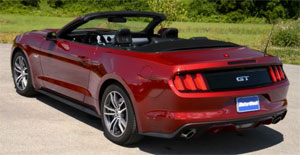 Government Fuel Economy Ratings for the 5.0-liter auto are 15-City, 24-Highway, and 18-Combined. So, our average of 20.4 miles-per-gallon of Regular was better than expected. Still, the Energy Impact Score is below average at 18.3-barrels of oil consumption and 8.1-tons of CO2 emissions yearly.

Convertible pony cars are always a compromise. For us, the coupe formula is clearly the best. But we do admit they do make you look and feel cool.

So while the 2015 Ford Mustang Convertible has lost a little prowess in the translation from hard top to soft top, for those that like to do their relaxed weekend cruising in big-engine muscle, this is one great horse to ride in on.