With Honda in the midst of launching the subcompact HR-V crossover, and you just saw our report on the new three-row pilot, you might wonder what’s become of the middle child, the CR-V. Well, it’s doing fine thank you, and as one of the original compact utes, it’s just gotten a refresher course to keep it competitive against a tidal wave of rivals. So, let’s see if the CR-V can still hold its own.

Better selling through technology is what the 2015 Honda CR-V is all about. As Honda has thrown most of their latest at it, in order to retain its spot as the volume leader among small utilities.

The exterior has been tweaked, most noticeably with hi-tech looking led running lights, and with a slightly more aggressive look to both the front and rear fascias.

There are minor changes to the profile, as overall length grows an inch and ground clearance gets a tiny boost, but wheelbase remains the same at 103.1-inches.

The most noticeable technology advance on the interior is the new 7-inch touchscreen for audio and navigation. It is very tablet-like in operation, and is a big change for the better; though at the sacrifice of all the knobs which we miss. A multi-angle rearview camera is still standard. 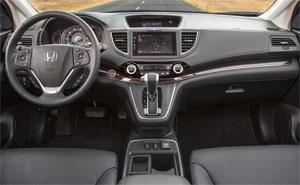 The center console has been redesigned for more functionality, and now includes low-tech, but very appreciated air vents for the rear seat passengers. All seats remain very comfortable, and even when sheltered in bulky winter gear, things are plenty roomy both front and in the rear, where there’s a virtually flat floor.

Despite some inexpensive feeling materials, build quality is very good, as is fit-and-finish throughout, even in the cargo area which has lost a little bit of room; now capable of storing 35.2 cubic-ft. Of cargo. That space expands to 70.9 cubic-ft. With the 60/40 split seatbacks folded.

Even with a 2-piece design, folding those rear seats is still among the easiest in the business, whether initiated from the side or from the rear. And the resulting almost flat, very low floor makes loading equally stress-free.

For most of the CR-V’s advanced technology you have to step up to the new touring trim level. Along with a power lift-gate, 18-inch wheels, turn signal mirrors, upgraded headlights, and 2-position seat memory, comes a wealth of added safety technology such as collision mitigation, lane keep assist, and adaptive cruise control. Honda’s right blind-spot eliminating lanewatch camera is standard on ex models and above. 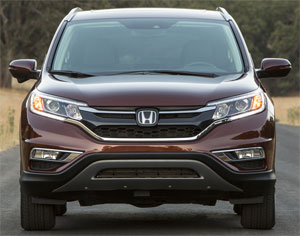 Technology under the hood starts with a revised 2.4-liter I4 that now wears Honda’s “earth dreams” monikor as it adds direct-fuel injection. Horsepower stays the same at 185, but torque jumps 18 to 181 lb-ft. Still, towing capacity remains at 1500 lbs.

The 5-speed automatic transmission has been replaced with a CVT, which we had few complaints about. It operates smoothly, and engine noise is more subdued than most, though that could also be because of the additional soundproofing measures that have been added for ’15.

Supporting it all, the suspension tuning has been tweaked, and the brakes improved; for sportier ride and handling. And with optional all-wheel-drive, even on our winter roads, this CR-V felt noticeably more solid and surefooted, and ready for winter’s worst.

All-in-all, we’d say it feels a little more nimble even if it isn’t. It definitely feels more secure, with a ride quality that’s a tiny bit harsher.

A late snow kept us from getting instrumented 0-60 runs, though we estimate a reasonable 8.5 seconds. The new powertrain provides ample spirit for both launching and passing maneuvers.

And even with the additional power, government fuel economy ratings increase significantly to 26-city, 33-highway, and 28-combined. But, our 26.2 mileage loop was a little disappointing.

Along with the new HR-V and pilot, Honda’s crossover lineup will have been completely revised in a matter of months. And while they certainly had no problems selling CR-Vs in its former state, all of the changes here should bring even more into the fold.

The 2015 Honda CR-V is the same smooth, competent vehicle it was last year, only now a little better. So, it remains a no-brainer choice among compact utilities. Yet, even with its technology boost, there are better values. Still, none will validate your buying decision more.