While we as automotive enthusiasts tend to be wary of returning nameplates, as they rarely live up to the cars that originally used them, it can be done with success, as jeep proved with the new cherokee. Well, with that success in hand, jeep is now focused on the rapidly growing small crossover segment, and has placed the venerable Renegade name on an new model, with a new DNA.

Renegade is defined as “one who deserts or betrays an organization.” So it’s a fitting nameplate for the 2015 Jeep Renegade, as it enters into a new segment for brand, and is clearly unlike any other jeep in the stable… …or is it?

Jeep fans know that renegade not as a model name, but rather a trim package found mostly on cjs and wranglers.

And while early photos, with its borderline-cartoonish appearance, made it hard to take seriously, in person, the subcompact renegade sports much better proportions while still saying classic jeep up front. But, less so in the rear ¾ view with the upwardly arched quarter windows. But, the x-motif in the taillights and elsewhere, playing off a ww II-style fuel can, is pretty cool.

As for its new DNA, the renegade is on fiat’s small-wide 4x4 platform that it shares with the 500l and upcoming 500x. Built in Italy, FCA hopes renegade will make jeep as popular in global markets as it is here. 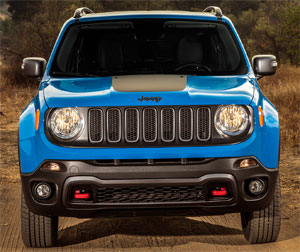 One feature we haven’t seen on other new smallish-utes is removable roof panels. Renegade’s basic mysky system has two separate pieces that, when taken off, deliver some of that open air experience jeeps are known for. Mysky with a power sliding front panel is also available.

There’s not an abundance of room in the comfortable front seats, but more than you’re expecting; and that just means all of the controls fall close to hand.

Seat controls were manual in our latitude-trimmed tester, but they’re very beefy felling, not compact car flimsy. The instrument panel looks nice, if a bit gimmicky. there’s jeep logos and “since 1941” script everywhere. It can get a bit cheesy and some materials are more economy than rugged.

The uconnect screen is on the small side, but it gets the job done, and the overall look of the interior will undoubtedly appeal to the younger set. Rear seat room is good, but the seatbacks don’t quite fold flat for cargo.

And while total cargo space is decent at 50.8 cubic-ft; 18.5 behind the rear seats; it falls well short of the Honda HR-V. Also, the mysky panels storage bag takes up a lot of floor space.

Now, jeep wanted to make sure you can still do jeep-type things in the renegade, and the trailhawk model features a standard active drive low 4x4 system with terrain select  modes for snow, sand, mud, and rock. It’s clearly the only suncompact ute designed for true off-road use. 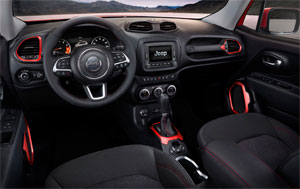 And you can still get jeep’s regular-strength active drive full-time 4x4 system in all other trims, which worked fine for us.

On road, the renegade feels very car-like, with minimal roll in corners and heavy steering. It’s a solid package overall, with no squeaks or rattles from the roof panels, though wind noise can ring out at speed.

As for powertrains, there are two. The larger, 2.4-liter tigershark I4 boasts 180-horsepower, and 175 lb-ft. of torque. Though a little rough at idle, there’s an impressive amount of power for a segment that mostly consists of sub-2.0-liter engines.

And of course there is one of those available here as well, fiat’s 160-horsepower 1.4-liter multiair turbo-4 which comes with a 6-speed manual.

The 2.4-liter gets a 9-speed automatic which worked okay. There’s still some occasional stumbling, but it’s definitely an improvement over early cherokees.

At our test track, the 2.4 renegade snaps off the line like a sprinter, but quickly settles down into a marathon pace; reaching 60 in 8.6-seconds. Leisurely shifts compound the ¼-mile situation, which took 16.5-seconds to climb to 83 miles-per-hour. 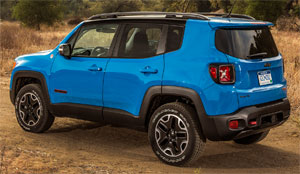 A relaxed pace was the way to go through our cone course too; as anything more, turns manageable understeer into full-on plow. An average stopping distance of 120-feet from 60 was not bad, but random locking and an unsettled rear needs to be improved upon.

Government fuel economy ratings for a 2.4 4x4 are 21-city, 29-highway, and 24-combined. Our average of 25.4 of regular is certainly superior to an old xj; but we expected better from such a small-fry. Still the energy impact score of 13.7-barrels of oil use and 6.1-tons of annual CO2 emissions is healthier than average.

We think jeep’s first attempt at a truly global small crossover will represent the brand well throughout the world, as it will be available in more than 100 countries. Pricing here in the good old U.S. of America starts at $18,990 for a sport; 4-wheel-drive adds 2-grand more.

So, while its origins are off-shore, the 2015 Renegade still embodies much of what has made the jeep brand an American icon. Combined with a low price, it’s the perfect jeep for people who think they want a jeep, but really want a rugged-looking small crossover with all of the modern comforts they’ve become accustomed to. so, renegade is one traitor with a good cause.