If there’s one vehicle type that attempts to be the Swiss Army knife of automobiles, it’s the humble minivan. Cherished by some manufactures, abandoned by others, there’s really no more practical vehicle when it comes to hauling lots of people or things in big car comfort and ease of driving.  Kia is one brand that hasn’t left the segment, and it hopes to help it grow with an all-new Sedona.

The 2015 Kia Sedona marks the third generation of Kia’s sliding door people-mover. And, while never a serious competitor against Honda, Chrysler, or Toyota minivans; Kia hopes to force that issue by giving the new Sedona a big boost in both functionality and style.

2015 also marks Kia’s 20th anniversary selling in the U.S. and like most recent redesigns, the Sedona has moved upscale in feel and content level, with more trim levels added on.

While some carmakers have abandoned minivans, Kia sees plenty of room for growth by embracing the multi-purpose-vehicle nature of the minivan. All while continuing to please soccer moms and dads with features like standard YES essentials stain-repelling fabrics.

One of the many reasons that driver’s prefer crossovers to minivans is their commanding driving position. And Kia has factored that in, giving the Sedona a higher seating position so you can look eye-to-eye with SUVs. 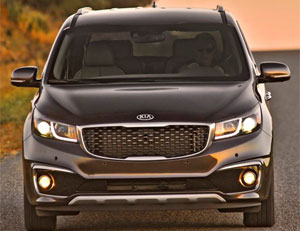 If you’ve ever been to Sedona, Arizona, you know that it offers breathtaking beauty found nowhere else in our country. And while you won’t find that kind of magnificence here, as it’s truly hard to make a big, moving box appealing; Kia does the best job we’ve yet seen.

It’s clear that they’ve tried to make Sedona appear as much like a crossover as possible, with a tall front and longish hood; but the aggressive tiger-nose grille sets a tone that the rest of the body doesn’t quite live up to.

Compared to last year, there’s an additional 1.6-inches between the wheels, while width and height remain about the same. But thanks to the longitudinal stretching, all seating positions gain a little more room.

But, what about that maximum versatility we mentioned. Well for getting the “max” from this Sedona you have to be careful of what trim you choose. Our top drawer SX Limited had comfy second row captain’s chairs with foot rests, that slide together to make getting into the 3rd row easier. But, and it’s a big but, they don’t fold flat and cannot be easily removed. 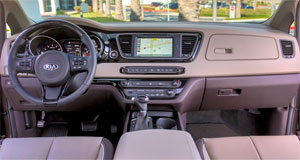 All other Sedona trims have Slide-N-Stow seats that combined with a somewhat bulky fold-into-the-floor 3rd row provide the long, mostly flat load floor you buy a minivan for. It’s not quite as convenient as Chrysler’s Stow-n-Go, but it is the closest attempt yet. Maximum cargo capacity is 142.0 cubic-ft., about the same as a Town & Country but less than the Honda Odyssey and Toyota Sienna.

Sedona’s 3.3-liter V6 provides plenty of power for both carpool and family vacation duties. 276-horsepower and 248 lb-ft. of torque to be precise. A 6-speed automatic transmission is included, and the Sedona remains front-wheel-drive only.

As to driving, most minivan buyers aren’t really looking for a sporting experience, just one that’s competent and comfortable. The new Sedona should keep all parties happy, with a stable and relaxing ride. Still, manual shift and selectable driving modes are available for when Mom lets wannabe racer Dad get behind the wheel.

At our test track, the Sedona reached 60 in a quite good 7.8–seconds, and the ¼ mile in 16.0-seconds at 90 miles-per-hour. There’s enough grunt off the line to spin up the tires a bit; and once you get it revved up and rollin’, there’s still plenty left to give you a little high end rush, even with smooth but lazy shifts.

Handling was also quite a bit better than expected for a 47–hundred pound mom-mobile.  Speeds through our slalom courses were surprisingly high, and both understeer and body roll were minimal.

On the safety front, good brakes are important of course, and here the Sedona was again up to the task; bringing things to a stable halt in 118 feet from 60; a good, short result. A full suite of advanced crash avoidance features and driver safety aids are also available. 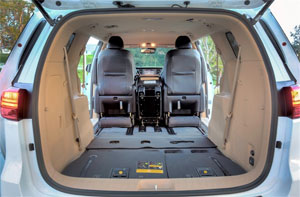 Government Fuel Economy Ratings are 17-City, 22-Highway, and 19–Combined. Our average of 19.4 miles-per-gallon of Regular was right on the money; but it should be better. Thus the Energy Impact Score is slightly below average at 17.3-barrels of yearly oil use with CO2 emissions of 7.9 tons.

Pricing for the Sedona starts at a family friendly $26,795. But, packing on the features adds up quickly, as it does for rivals as well.

While you might question Kia’s sticking with a minivan, you can’t argue with the results. There may not be anything earth shaking about the 2015 Kia Sedona; just lots of space and plenty of upscale comfort and features for the price. And sounds like the kind of multi-purpose vehicle that most families are still, at least secretly, looking for.