Without question the hottest vehicle trend in recent years is the rise of small utility vehicles. The variety of new compact and subcompact crossovers available today is amazing, with more and more riding the luxury wave as well. But, only one small ute mixes a smaller footprint, with serious upscale appointments, and the latest in hybrid powertrains. That would be this Lexus NX 300h. So let’s see if this formula works.

In our earlier drives of the 2015 Lexus NX we spent most of our time in the sporty 200t F Sport. We found it very dynamic and nimble, if a little harsh to drive. So, we thought we’d spend a little more time in the hybrid 300h to see if the kinder and more fuel efficient profile makes for a better or worse experience.

There’s not much that’s obvious separating the 300h from the more aggressive 200t; but the more time you spend with it, the more you see the variances shine through.

The biggest thing we notice is that the 300h does not have nearly as rough of a ride quality; despite also wearing 18–inch wheels just like the F Sport. Yet, it’s still far from being as smooth and comfortable as some others in the segment like the BMW X1 and Audi Q3. 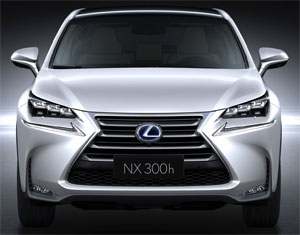 The numbers indicate that space inside compares favorably with the rest of the segment; but to us, it just feels tiny, even tighter than its kin: the RAV 4, particularly when sitting in the narrow, highly bolstered driver’s seat.

Because of that, it just doesn’t provide the usual ultra-luxurious experience that Lexus is known for. But, Lexus has made it loud and clear that they’re going after a different buyer now. The NX is perhaps the greatest proof yet of that more performance oriented mission.

On that score, things were blissful at our test track. We found this hybrid’s acceleration to be nicely strong. The engine revs freely, as does the CVT induced noise, which also detracts from any luxurious feel.

It took 8.4-second to dash to 60, and 16.5–second to the end of the ¼ at 84 miles-per-hour. Not bad for any ute or hybrid. The CVT has a new kick-down feature that simulates dropping a gear when you mash the gas.

The Hybrid system is drawn from the Camry and consists of a 154-horsepower 2.5-liter I4, 2 electric motors, and of course the CVT. Total output is 194–horsepower.

All-wheel-drive units add a 3rd electric motor to drive the rear wheels; so it’s an altogether different powertain than the 200t.

Braking results of 117–feet from 60 were also good. Stops were very stable, but accompanied by an unsatisfying regenerative feel to the pedal.

Despite the softened ride and obvious emphasis on fuel economy, this chassis still felt very competent through the cones; with manageable amounts of understeer.

No matter how much time we spend with the NX, it’s not enough to change our opinions of Lexus’ new ultra-aggressive styling. Here, it’s too much on something so little. 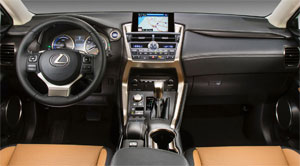 The small luxury crossover market is getting crowded, and we’re still waiting for someone to come in and hit a home run. The NX could have been the one to do it, particularly given its size advantage over most new entries that are more in the subcompact realm; but we just don’t think so.

Size and styling aside, the interior still has the overall look and material quality of a true Lexus. And, there’s even a CD player that’s easy to use. Unfortunately the same cannot be said for the actual radio controls.

But, the optional navigation works great, and we’re mostly getting used to the Lexus Remote touch controller, though we used the steering wheel controls first when we could. All of the Lexus safety, and convenience features you expect are here including heated seats, blind spot monitoring, and wireless phone charging.

While the front seating area seemed cramped, we rate second row comfort as above average for small utes. And, despite having to make room for the hybrid’s battery, there’s decent cargo room as well. 16.8 cubic-ft. seats up, and 53.7 cubic-ft. seats down.

Government Fuel Economy Ratings for our all-wheel-drive hybrid are 33-City, 30-Highway, and 32–Combined. We feel our average of 35.7 miles-per-gallon of Regular is stellar for any utility. The Energy Impact Score is also quite good at 10.3-barrels of oil used and emissions of 4.6 tons of CO2 yearly.

To us, Lexus’ ongoing attempt to mirror German brands with a performance bent to virtually every product is delivering mixed results. On one score their newest offerings deliver very good performance. But, the in-your-face styling, and compromises on Lexus givens like ride control are disconcerting; compromises that their rivals have overcome.

Still, as the only small, luxury, hybrid ute out there, the 2015 Lexus NX 300h still has a lot of appeal. We just wish it had even more.