Now stop us if you’ve heard this one before. Lexus, known for purveying ultra-plush luxury, is now stepping into the performance ring. Okay, so it’s not their first, or even second attempt to shed the soft image for a harder-core one. But, will the results be any different? Let’s hit the track in the new Lexus RC F and find out.

So up until now, Lexus performance, with the exception of the limited production and very exotic LFA, has been more like a karate chop at a gun fight. But this 2015 Lexus RC F coupe just might even the odds.

Indeed, after 3-days of relentless round-da-rounds at the hands of our test team, we can say the RC F definitely has the goods to take on a road course; impressing all of our drivers with a great V8 bark, and nimble chassis bite to back it up.

That V8 is a 5.0-liter with roots that go back to the IS F sedan. Much tweaking has been done since then however, and output is now 467-horsepower and 389 lb-ft. of torque. 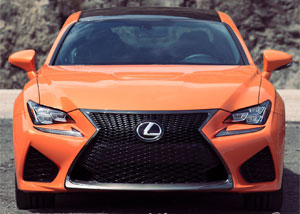 As a rear driver only, the transmission is a beefed up, 8-speed direct shift automatic that worked very well through Roebling Road’s nine turns, even when left in straight-up auto mode.

While clearly based on the RC 350, Lexus claims that 70% of the RC F’s suspension componentry is new or updated.

Another value added feature is the available torque vectoring rear differential that makes a huge impact on both the RC F’s performance and personality, helping put maximum power to the pavement in corners when in Track mode. Left in Standard mode, it feels like an entirely different vehicle that likes to power-on oversteer more than cling to an apex.

At around 4,000-pounds, the RC F is certainly no lightweight. But it feels and responds much lighter. Through the corners, the bolstered RC F sport seats kept our drivers squarely in place. Yet, they still delivered the comfort that Lexus owners demand.

Though overall highly capable, we could do with less initial understeer at turn-ins. And, the quietness of the RC F’ proficiency makes it less exciting to drive than we’d hoped.

But, those are nitpicks. If there’s one significant weak point, it’s the brakes. Initially they felt great. But after only a few laps, they grew soft and uninspiring.

Off the turns, and on the straight, this raucous V8 also proved its metal. It loves to rev. There’s not as big a hit of torque right off the line as you might expect, but rather a nice build that gets you fast rather quickly. 0 to 60 takes just 4.4-seconds.

Despite relying on a true automatic for transmission duties and not a sequential manual; shifts are quick and smooth, with power mostly uninterrupted. Helping us clear the ¼ in 12.8-seconds at 114 miles-per-hour.

Body enhancements galore certainly make the RC F a stand out. There are plenty of both air inlets and outlets, an active rear wing, optional carbon fiber roof, and stacked exhaust tips that give the hind quarters a truly maniacal look. 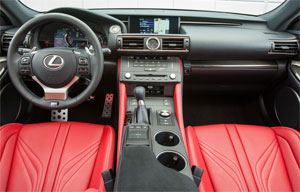 Despite the comfy seats, the overall interior comes off tighter than a typical Lexus buyer would be accustomed to. But, then, this is everything but a typical Lexus. Still, the usual leather coverings, high quality materials, and high-tech niceties are mostly included.

An F-specific gauge set alters screens depending on driving mode, and the multi-information-display hosts a wealth of info including lap times and even rear wing position.

Now, the real bonus. Even with all of its track prowess, the RC F is also a pleasant street car. The ride is never harsh, and great chassis response means you don’t have to be driving super-fast to enjoy yourself. Government Fuel Economy Ratings are 16-City, 25-Highway, and 19-Combined.

But, back to the M4. The 2015 Lexus RC F may be a bit cheaper, but is it also a close contender? Well, we think it is surprisingly close on the street, and yes, on the track as well. Who ever thought we would say that! And that is just how far Lexus performance has come.