Though the Cadillac Escalade may get most of the reps in rap videos and cop shows on TV, the Lincoln Navigator is still very much a presence in the big buck, big truck, luxury SUV market as well. And just to prove the point, it gets some updates for ’15 that should keep it ridin’ high.

Once you get past the 60 G’s plus sticker of the 2015 Lincoln Navigator, and spend quality time behind the wheel, it’s easy to see why people fall in love with full-size luxury SUVs.

Ridin’ high and lookin’ handsome, is a tremendous way to go about your daily business, and an even better means to hit the highway for a first class road trip.

With the rise of more efficient crossovers, these body-on-frame dinosaurs, while not yet a dying breed, certainly have more limited appeal. But that includes those that want to tow up to 9,000 pounds, which no three-row crossover can approach. 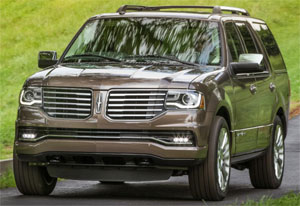 So, while it’s not a totally new look, the exterior is freshened, most notably with a modernized split-wing grille. And although headlights remain HIDs and not LEDs, there are a total of 222 LED lights scattered around the exterior.

It’s an overall improvement for sure. Yet is also tries a little too hard with items like 22-inch wheels, and the Reserve Package’s not-that-nicely integrated power running boards. As before, 2-wheelbases are available, standard at 119.0-inches and extended at 131.0-inches.

Likewise the 8 passenger interior sees much refinement, and perhaps with better results. The feel is now more high tech, and we’re all in favor of the improvements made to MyLincoln Touch, by bringing back some manual controls. And the SYNC system still has one of the best voice recognition software out there.

The minimal appearance to the gauges appears odd at first, but all the usual info and more is there, it just might take you a click or two to get to it. The aforementioned Reserve Package adds upgraded leather wrapping to most interior elements, plus new Ziricote wood trim. 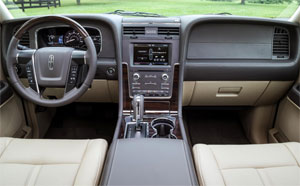 The seat folding process is not as good as rivals, and the fit-and-finish in the cargo area is not befitting of such a pricey ride. You also still have to reach into the cargo area to trigger the power rear hatch.

It’s not unusual to get into a big truck-based SUV and get an old-school feel, but it’s primarily noticeable here after having spent some recent time in the latest GM big boys. But having said that, the Navigator is surprisingly agile. It greatly benefits from new electric power steering, and from the available Lincoln Drive Control continuous damping, that, despite those 22-inch hoops, kept the ride very plush.

Overall, Lincoln has done a good job refreshing this old chassis, even if it’s not as modern feeling as others in the segment. And with the rest of the Lincoln lineup moving away from reminding you of the Ford vehicles they’re based on; Navigator is now clearly an outsider.

Perhaps the best part of the whole vehicle, and certainly the most modern, is the powertrain.  It all starts with a 3.5-liter Ecoboost V6 that puts out V8 levels of power: 380-horsepower and 460 lb-ft. of torque to be precise. 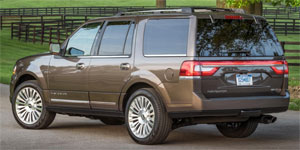 While pricey to us, the Navigator actually compares well to its Caddy competitor. Starting at $62,475, it’s about 10-grand less than Escalade.

In a world where the next latest-and-greatest comes at you faster-and-faster, The Navigator could use a full on re-design. But these updates, along with a price advantage, keep it a legit player. So, if you’re an upscale family looking for an upscale upsized ride, the 2015 Lincoln Navigator should certainly be on your list.