When the Nissan GT-R arrived stateside for 2009, it quickly lived up to all of its hype by delivering high performance worthy of cars twice its price. It was a beast and we loved it! But as they say, if you’re not moving forward, you’re standing still. So, with updates for ’15, we just had to see if the GT-R legend is still growing.

Even with all of the hype that has surrounded the Nissan GT-R over the last six years, every time we’ve gotten behind the wheel, we’ve never come away disappointed. However, this 2015 car is the first we’ve had at our road course of choice, Roebling Road Raceway near Savannah.

To recharge the GT-R’s image, Nissan has launched an all-out assault on global supercars with 3 GT-R’s for the choosing, from a base Premium GT-R, to Black, and even NISMO variants. We chose the GT-R Premium for our test and wasted little time getting out on the track.

From inception, Nissan has continuously improved the GT-R. So this 2015 edition is far from new. All versions still rely on the same 3.8-liter twin-turbo V6 under hood. But, that’s OK by us as it is a true work of mechanical art; with cool colors, lots of plumbing, a builder’s plaque, under plenty of structural body bracing. Output here is 545-horsepower and 463 lb-ft. of torque.

Transmission is a paddle-shifted 6-speed sequential DCT, and of course power is sent to all 4 wheels.

But, there are big changes that are not so visible, like a total rework of the suspension; and it is a departure from the “stiffer is better” approach of most road going super high performance cars of today.

New shock valving allows for both a more compliant, if hardly soft, ride and for a larger tire contact patch on the track. Combine that with all-wheel-drive grip, and a big helping of turbo charged torque, and the GT-R shoots off turns like an NFL cornerback.

The GT-R’s aluminum and carbon-fiber chassis, with its transaxle and independent rear setup, is a unique one; and it feels truly at home on a race track, as long as you can keep your butt from sliding around the cockpit. A seat bolster upgrade is definitely in order for track days.

But those flat seats, and a surprisingly vague steering feel, pretty much wrap up our complaints.

So while we can confidently predict that no one will be disappointed with a GT-R that is both more capable and more comfortable; the few people that live with one every day, will surely appreciate the more refined nature of the interior best of all. 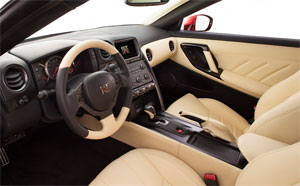 Though there’s still a business-like approach, with a large tach in the center of the cockpit-style I.P. and plenty of performance setting switches for flippin’.

And it seriously gets down to business when it comes to making acceleration runs, as the GT-R’s launch mode is about as ruthless as they come. But you only get a couple runs until you have to take a time out for the electro/mechanical governess to have a breather.

But, times up and the onslaught of power becomes relentless; just hold onto the wheel and let the car do its thing, ripping out a 3.1-second explosion to 60. Automatic shifts are merely a blip, not delaying progress at all; and after 11.4-seconds of automotive insanity we reached the end of the ¼ at 123 miles-per-hour. While we’ve never been catapulted off an aircraft carrier in a fighter jet, we imagine the experience is similar.

Even sitting still, the GT-R does look like it’s ready for flight. There are aero blades on the fenders and a big intake up front for sucking in air.

From the rear its more “chunky” looking than anything else. Highlights include the signature 4-ring tail lights, large wing up top, diffuser down below, and of course 4 big exhaust tips. Updates for ’15 are limited to new LED headlights and this Regal Red paint job.

For the record, Government Fuel Economy Ratings are 16-City, 23-Highway, and 19-Combined.

Costing half what the majority of the cars it is compared to do, the 2015 Nissan GT-R fully earns its place among the supercar elite. While it may have been gamers more so than actual racers that have perpetuated the GT-R’s fame, one thing’s for sure: This brut of a legend is not seeing an end any time soon.