The Nissan Murano made quite a splash when it arrived for 2003, easily being the most stylish crossover utility around. That is until it was redesigned in 2009 as an even more stylish and luxurious showroom alternative to traditional Nissan utes. Well, for 2015 Nissan is tripling down with an ever bolder third generation Murano. One we think buyers will find impossible to ignore.

There is certainly no shortage of mid-size, five-passenger crossover utilities to choose from. But, with the 2015 Murano, Nissan is hoping a lot more people will be choosing this unique example of near-luxury transport for their next ride.

For its 3rd generation, the first assembled here in the U.S., somehow Nissan managed to make the new Murano look even more dramatic than before. The lines have gotten both more flowing and a tad more rugged; with its V-Motion front end setting the tone.

From there, protruding rockers, highly arched body lines, and sloping top panel lead to blacked-out D-pillars that give a “floating roof” appearance. Not a unique tactic, but it’s still distinctive and one we think looks great. 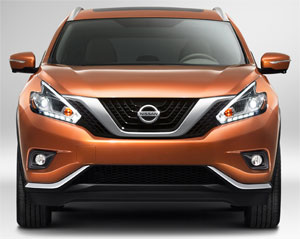 Wheelbase at 111.2 inches is the same as before, but overall size is marginally longer and wider. Weight comes in around 4,000-pounds depending on trim. Full LED headlights are available; and Nissan’s signature LED boomerang lights are further refined, now thinner and pushed out towards the corners.

More efficiency is a must these days, and thanks to shedding pounds while still growing larger, a feat few of us have been able to accomplish, fuel economy is up by as much as 20%. Government Fuel Economy Ratings, whether you choose front or all-wheel-drive now come in at 21-City, 28-Highway, and 24-Combined.

Aero enhancements are also a big part of the fuel economy picture, including active grille shutters, fender lip moldings, rear spoiler, and an air cheating rear bumper surface. As are harder tires on the 20-inch wheels seen here on this Platinum model. 18-inch alloys are standard on all other trims.

As for the under-hood part of this pretty picture, it’s a familiar one; the VQ35 3.5-liter V6 that’s available throughout the Nissan lineup, including in the previous Murano. Here, putting out 260-horsepower and 240 lb-ft. of torque. That also means you’ll get the same Xtronic CVT transmission, for better or worse. And even with the same powertrain that’s in the larger Pathfinder, the Murano is only rated to tow 1,500-pounds, compared to the Pathfinder’s 5,000. 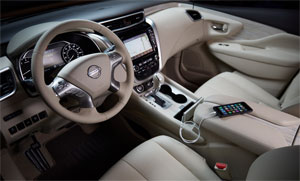 And while though the smaller Rogue has a 3rd row option, there’s just two rows of seating here, as Nissan sees the Murano as less for a family and more of a luxury-minded empty nester ride.

Without a doubt, interior materials are a step above other Nissan CUVs. The theme is sporty, with unique textures and trim work that, again, stands apart from the typical high-lacquered wood luxury look. Center stack controls are logical, easy to reach, so very functional.

Yet the overall interior feel is relaxed, almost lounge like and very airy, aided by the available, nearly full-length panoramic moon roof. As for the seats themselves they are roomy and comfortable, front and rear.

NissanConnect with Navigation and Mobile Apps is available, all featured on an 8-inch display with a multi-touch controller. Nissan’s great Around View monitor is offered, but a basic back-up camera comes standard. Cargo capacity is quite good with 39.6 cubic-ft. of space behind the 2nd row and 69.9 cubic-ft. with the 2nd row seatbacks folded.

Not quite as serene as the interior environment was the ride quality, which we found sporty and firm. But, much of that might be due to the 20-inch wheels on the Platinum model.

And, you do pay more for a Murano. Prices start at $30,445 for a base S model; that’s actually more than a larger Pathfinder; and escalate until you arrive at Platinum status for $39,885. All-wheel-drive adds $1,600 to all trims.

So, the question for consumers comes down to this; is the Nissan Murano’s well-appointed style, backed by solid midsize crossover attributes, worth its premium price?

If one is looking for more of a practical flagship than a typical suburban hauler, the answer will likely be yes. The fact Murano sells in modest numbers is a further boost to its status. Nissan is to be congratulated for making space in its crossover lineup for something different, without expecting 6 figure sales. For the 2015 Nissan Murano is really all about style.

We’re off to a quick start with this 2015 Nissan Murano, our Drivers’ Choice pick for best small utility of the year, racking up over 3,000 miles in just 4 weeks.

What we find here are comfortable seats that easily go the distance, a great nav. system, fine handling, and a helpful forward collision warning system. In short we love the Murano.

The slick styling also attracts plenty of attention, as the Murano does a great job of looking very different, despite an overall shape and proportions that are similar to every other mid-size crossover patrolling suburbia.

As for possible improvements, the radar cruise control is not the best we’ve experienced, and we could use more places up front to stash all of our small items.

Surprisingly, even with all of those highway miles, our fuel economy average of 23.1 is still short of the government’s Combined rating.

But, the 3.5-liter V6 does provide great power, and so far no complaints about its CVT transmission. Still, we’ll reserve final judgement until more months roll by.

Just two months into our long-term test of this 2015 Nissan Murano and one thing here is clear. This near-luxury ute delivers just about everything you want, including lots of space, and fair amount of extravagance, in a “just the right size” package.

Its well-seasoned 3.5-liter V6 and CVT transmission combo has been seamless over our initial 4,500-miles. But, with mostly commute and errand duties this go around, mileage has slipped a little to 22.6 miles-per-gallon of regular.

No complaints about the ultra-comfortable, living room caliber interior, as it has plenty of features to offer, despite our tester’s SL trim status falling short of top drawer Platinum; and it seems to be holding up very well.

As to styling, its “slick”, making the Murano really stand out among the today’s mid-size crossover clutter.

We’ll jump right into this update on our 2015 Nissan Murano by saying it’s clearly one of the most intriguing mid-size crossovers out there.

It’s two-row, 5-passenger size is just about perfect for up and coming families, with a near-luxury level of appointments and technology that, like the new Maxima sedan, boosts the image of the entire Nissan brand.

The slick styling certainly sets it apart from other mid-size mass market utes. It’s dynamic if also polarizing. Still, it cannot be ignored. Sure, the driver’s visibility may not be perfect, but it’s improved over the previous gen.

Two more indications of its luxurious pretentions are vague steering feel, and a towing capacity of only 1,500 pounds. Still, the long distance ride comfort is excellent, compliant without being sloppy. Mixed use fuel economy is acceptable at 23.0 miles per gallon, and the 3.5-liter V6 CVT combo has plenty of reserve power when you need it.

We’ve been enjoying this 2015 Nissan Murano for 7-months now, and we’re clearly not the only ones, as Murano sales are way up over last year. Though they still fall short of 2006’s high water mark when over 80,000 Muranos found homes.

The Murano has always had a distinctive look, but never more so than now. It has become a controversial one around our office as of late, with not everyone so enthusiastic about the floating roof design. Still, there’s no arguing that it’s a lot more Juke and Maxima than bland Sentra or Altima.

And we’re all firm believers in the zero gravity front seats which offer extreme comfort, helping alleviate some of the Murano’s tight suspension feel.

Fuel economy has improved since we last checked in, with the 3.5-liter V6 CVT combo now delivering us 23.7 miles-per-gallon of Regular.

As for our 2015 Nissan Murano, we’re transitioning from the 3rd to 4th quarter of its year-long stay, just as the weather it trying to turn from autumn to winter.

And the fact that it’s AWD-equipped gives us confidence for what surely lies ahead, though the sporty 18-inch wheels and tires do give us pause. We’ll see in the coming weeks how it fairs through the white stuff.

One staff member complained about poor sound quality when going hands free with his Android phone. No such issue with another staffer’s iPhone.

Other than that, comments continue about the “great engine”, “great seats”, and “smooth ride”; to go along with our 3.5-liter V6’s respectable 23.6 miles-per-gallon of regular fuel economy.

The Murano is clearly one of the best handling utes in its 5-seater segment; aided by a firm but seldom harsh suspension. Reduce the lag time from the CVT transmission and we’d be enjoying the twisties even more.

The love affair with our 2015 Nissan Murano speeds right along, as it is a real long haul champ.

After 10-months and 20,000-miles, it continues to garner praise for great style, powertrain smoothness, and a reasonable 23.4 miles-per-gallon average.

But what really stands out is how functional Murano’s interior is.  It’s a great looking design, yes; but it also features controls that are adequately sized and logically place.

What’s more, the rear seats when folded; do so without any gaps in the floor for things to get lost in.

Our long-term 2015 Nissan Murano 2-row crossover has already done its fair share of vacationing, as it has been with us for 11–months and 22,000-miles.

And despite performing mostly commuting duties of late, mileage from its 260-horsepower 3.5-liter V6, has steadied at 23.4 miles-per-gallon.

All of our drivers, and any passengers we’ve picked up along the way, agree that it’s as comfortable as a cloud; and all love the good looking, functional interior.

Two annoyances have begun to wear us down a little, however. The first being the seemingly long time it takes for the infotainment system to come fully on-line at start up. Which means if the prior driver leaves the radio on something ear splitting, you have to mute it until it lets you change the station.

Second, it’s also slow on unlocking the doors when you shut it off, again requiring a little patience. But really, we’re never in that much of a hurry to get out of this stylish “do-it-all” Nissan anyway.

Sadly, time with our 2015 Nissan Murano has come to a close, but it certainly hasn’t been sitting still since our last report; racking up another 2,700-miles, bringing our final total to 25,623.

Over the past year, this classy crossover has delivered us both high style and great comfort; wrapped in unique, attention-grabbing bodywork.

Its 3.5-liter V6 and accompanying CVT, continued to deliver decent fuel economy; with the final total at 23.6 miles-per-gallon.

And despite some new drivers behind the wheel lately; the comments remained the same. “Very comfortable ride with good performance”; “love the interior trim and audio interface.”

It’s been smooth sailing in our Murano in every respect; as we had no mechanical hiccups, and no major gripes. Well, there was one “locking the keys inside incident”, but best to leave that one alone.  It’s safe to say, we’ll miss this classy crossover!