Regardless of the fact that there are more Porsche SUVs and sedans on the road than ever before, don’t think for a minute that the brand has lost its passion for pure high performance. And clearly that’s what the 918 Spyder is all about. Yes, after what seems like forever, it’s finally here. So don’t blink, you might miss it!

The 2015 Porsche 918 Spyder was designed from the ground up to not only deliver unprecedented levels of performance for a street car, but to do so with minimum fossil fuel consumption; all without leaving every day practicality as an afterthought.

To accomplish this task, Porsche employed the same plug-in hybrid approach as other modern performance marvels like LaFerrari and the McLaren P1, but with the brand’s unique formula of course.

It starts with a naturally aspirated 608-horsepower, mid-mounted, 4.6-liter V8 engine that you can barely catch a glimpse of. Exhaust pipes point directly above for shorter travel and less heat in the engine compartment. 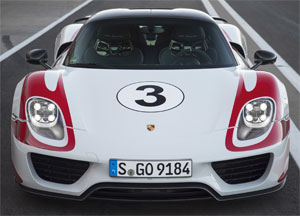 From there, it adds a 156-horsepower boost from a 115kW electric motor. Together, they send power to the rear wheels through a heavily-revised 7-speed PDK transmission.

Now if that weren’t enough, up front there’s another 95kW electric motor that sends an additional 129-horsepower to the front wheels. All told, there’s 887-horsepower and 944 lb-ft. of torque waiting to be unleashed at any given moment.

The 3 power sources can be used in a variety of configurations determined by which driving mode is dialed in. There’s everything from Hot Lap’s all full-on all-wheel-drive insanity for hitting 60 in 2.5-seconds; to E-Power mode, with enough energy stored in a low mounted 6.8kWh lithium-ion battery to get you 19-miles of gas-free, and virtually silent, driving at up to 93 miles-per-hour.

Of course everything is built in and around a carbon-fiber chassis, with curb weight just shy of 3,700-lbs.

Other techno trivets include rear axle steering and active aero.

The interior layout shows hints of familiarity, but is mostly its own unique animal. The seating position is business-like, with plenty of both support and comfort. 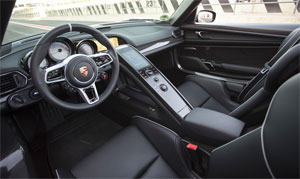 To the side, there’s a rising center console with a very comprehensive tablet-style touch panel, with large nav screen just above. Gauges nestle on the steering column directly behind the control-intensive 3-spoke steering wheel.

Driven at street-legal speeds, the 918 is docile and not high-strung like the McLaren P1. The throttle is very progressive, so you don’t feel like you’re doing a LeMans start every time you pull away from a stop sign.

There’s plenty of weird spacecraft-type noises, until you get on the gas hard, when it’s all engine noise with those exposed exhaust tips not that far from the back of your head.

Unless you’re on a race track, leaving the PDK in auto works just fine; but there’s so much torque available at any time, that gear selection becomes almost irrelevant.

Full power acceleration is meteoric, with no signs of ever letting up until you’re well into triple digits. And of course race spec. brakes are on tap to bring you down from speed in no time at all.

Despite the direct mounting of the double wishbone front and multi-link rear suspension to the carbon-fiber tub, ride quality is not all that different from a 911 on all but the roughest of roads, thanks to Porsche’s Active Suspension Management.

All-in-all it’s a pretty darn incredible car, with nothing really not to like about it.

What can you say about the looks, other than they’re 100% classic Porsche race car, but with enough style and modern touches to not look timeworn or forced retro.

The 2-piece targa-style roof is removable and Porsche was thoughtful enough to provide a place to store them, along with a token 3.7 cubic-ft. of cargo up front. There’s additional space in the garment bags behind the seat.

Being a hybrid, there’s no gas guzzler tax; as the 918 gets an overall Government Combined Rating of 22, and an MPGe of rating of 67-Combined.

With LaFerrari and P1 having price tags well over 7-figures, the 918 Spyder’s base price of $847,975 seems like a relative bargain. Still, don’t expect to see too many 918s around your neighborhood any time soon.

The 2015 Porsche 918 Spyder manages to capture everything that Porsche does best in one high-tech, missile-like projectile of a car. It’s a truly remarkable machine that does everything at a high level effortlessly and without compromise. But more importantly, it has set the standard for what an ultra-high performance exotic can be; and what Porsche will be delivering in the years to come.