The Porsche Boxster is truly a fun to drive two-seater. And while there have been r versions to spice things up a bit further, this is one sports car that has never had a proper high performance derivative. That changes now with the Boxster GTS. So, let’s hit the track and get the mid-engined madness started!

We fully realize that it’s totally impractical to make every car mid-engine, but it sure would be nice. And of course then maybe cars like this 2015 Porsche Boxster GTS wouldn’t be so special.

This car, along with the equally new Cayman GTS coupe, are the first mid-engine Porsches to sport a GTS badge since the 904 in 1963.

So, what goes into making a modern GTS? Well, there is the expected higher engine power output, followed by tweaks to the rest of the car to deal with it, and enough exterior enhancements to let everyone know you’re driving something special.

Starting with what you can see, GTS Boxsters get new fascias both front and rear; and a blacked-out treatment is applied to the headlights and tail pipes. Trademark elements like the body side air scoops, central exhaust, and active rear wing all carry over; and it’s still a beautiful car to look at whether top up or down. 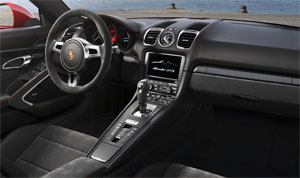 Interior-wise, the GTS level spreads some alcantra leather liberally throughout; but as only Porsche can do, you’ll have to pay extra for the actual GTS interior package to get GTS logos and carbon-fiber trim.

As always, the mid-engine design allows for storage at both ends, making the Boxster one of the most practical roadsters on the market.

Then there are the even more important upgrades that you can’t easily see. The foundation is the same 3.4-liter flat-6 found in the Boxster S. But now horsepower is up 15 to 330, and torque gets a 7 lb-ft. boost to 273, basically from an engine software update.

Porsche’s sport chrono package and active suspension management are both standard, as are 20-inch carrera S wheels. From there you can chose from a 6-speed manual or a 7-speed pdk transmissions.

And, just how does all this come together? To us that means track time.

Now, there was absolutely nothing to complain about with the Boxster S’s on- track performance. But, enthusiasts always want more and Porsche is always trying to deliver it. 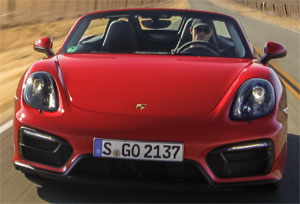 And what the GTS delivers is epic amounts of refined prowess that instantly make you a better driver than you are.

It slows down at the end of straights fantastically, grips like a champ through corners, rockets off of them healthily, gives you plenty of feedback the whole time, and even sounds great while doing it.

The additional power is not obvious, as this well-balanced rear-driver could easily handle a whole lot more, but it’s sure not lacking any either; and you’ll find most of it at the higher end of the tach. No understeer whatsoever, just immediate “point-and-shoot” turn-ins; accompanied by a perfect hint of oversteer to help rotate you through corners.

It’s hard to complain about the pdk auto, as we’ve traditionally found it seamless in just about every situation; but we did have a few occasions this go-around where it triggered a mid-corner downshift when we didn’t necessarily want it. But kept in manual mode, it worked flawlessly.

And speaking of perfect operation; in a straight line, Porsche’s launch control is among the easiest in the business to engage, and it works all day long, every time, no exceptions. Thanks to it, and seemingly “all-wheel-drive” levels of grip, we charged off the line to 60 in 4.2-seconds and eclipsed the ¼-mile marker in 12.8 at 112 miles-per-hour.

And when driven at a more relaxed pace, top up or down, you’ll be hard pressed to find a more refined or entertaining sports car driving experience.

Government fuel economy ratings for a pdk-equipped GTS are 22-city, 31-highway, and 25-combined. Earning a better than average energy impact score of 13.2-barrels of yearly oil use, with CO2 emissions of 5.9-tons.

Now, it’s hard to call $74,495 a bargain, but spend some time in this car, better yet some track time, and you’ll find it’s worth every penny.

In the grand scheme of things, the changes made to the 2015 Porsche Boxster GTS are relatively minor. But when the car is just about perfect to begin with, it doesn’t take too many small changes to make notable differences; provided they propel things even further in the right direction. So, what’s not to love about making one of our favorite cars even better?