MotorWeek wasn’t around in 1938 to drive the last rolls-royce wraith, but the advanced nature of that chassis; adjustable shocks, welded rather than riveted frame; made wraith cars highly distintive. now, rolls is reviving the wraith name in hopes of bringing new prospects to their brand, with a design that is one again different, and way ahead of the curve.

Even in the stratosphere of ultra-exclusive vehicles, the two-door 2015 Rolls-Royce Wraith stands out as a very unique vehicle. Oh, and it’s the most powerful Rolls-Royce ever. Either one of these would be a great reason for purchasing this rolling piece of prominence, but our reasoning would be the Wraith’s actual behind the wheel experience. Yes this Rolls is intended to actually be driven by the owner.

Based on the Ghost sedan, it offers extreme isolation from the outside, and less fortunate world, but where it differs is it is relatively more fun to drive, at least as far as we’re concerned, when it comes to a Rolls-Royce.

The experience is a bit of a throwback, to a time when high-end cars were made to ride smooth, and be mechanical wonders; not the sensor-intensive, computer controlled, luxury standards of today.

So it’s not as sporting as a Continental GT, but rolling on a wheelbase that’s more than a foot longer, stretching over 10-feet, it rides like a whole other class up of vehicle.

The power it delivers, all 624-horsepower, and 590 lb-ft. of torque may also seem extreme. But it’s the effortless delivery that is truly remarkable. As is its very striking fastback design, which surely would look more at home on the French Riviera than around our offices in Owings Mills, Maryland.

But whether on the move or standing still, it is quite a presence; and that’s before you swing the huge doors open to the rear. And since they open so wide, don’t worry about reaching out to close them, just summon the invisible butler with the push of a button and stay put. 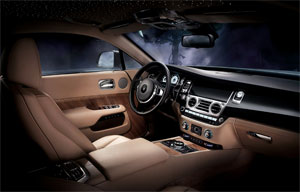 The majority of the behind the dash technology comes from BMW, but there are a few special elements such as GPS based shift logic for the 8-speed automatic transmission. And the 10-inch infotainment display can stay hidden for a more traditional look. Plus the amazingly extravagant StarLight headliner is Roll’s alone.

Even under those fiber optic stars, there’s plenty of other aspects to fall in love with in the back seat. And you might want to stay put as long as possible, not only because of the sheer luxury and amenities you’re wrapped in, but because it’s not the easiest space to climb out of.

Climbing out of the hole at our test track took some restraint to keep from luxuriously melting the rear tires, so we were only able to achieve a 0-60 time of 6.8-seconds in less than ideal track conditions. Disappointing, since it should easily be under 5.0-seconds.

Its great road presence doesn’t quite translate to track work, as muscling the Wraiths 5,200-plus pounds of bulk through tight turns also calls for some restraint, and if you don’t, better try a “Hail Mary” or two.

Government Fuel Economy Ratings are not as out-of-whack as you’d expect, 13-City, a most respectable 21-Highway, and 15-Combined. But that still earns a Gas Guzzler tax and a very poor Energy Impact Score, burning through 22.0-barrels of oil per year with annual CO2 emissions of 9.5-tons.

Rolls thinks the U.S. will be the biggest market for the Wraith, so I guess there will be more than a few 1-percenters shelling out the close to $300,000 required. Plan on spending much more to make yours unique however, as ours had almost $100,000 in options.

So unless you plan on living in it, which one of our staffers briefly contemplated, it’s probably not the most practical of purchases. And compared to a Continental GT, it’s a much pricier one. But you do get amazing exclusivity, which is what this price bracket is all about. As this apparition will indeed be rare to catch a glimpse of, and we’re most glad we did.