By now you’ve heard all the Volkswagen turbo diesel fiasco. Residual values, VW stock prices, and brand image have all taken a beating over recent months. But, what’s been lost in all of the hubub is that there’s a new Golf Sportwagon. And, despite the diesel disaster, the Sportwagon deserves it’s time in the spotlight.

For those fans that were upset over the demise of the Jetta SportWagen, we have great news. It’s hasn’t really gone away, it’s just been re-designed, and renamed, as the 2015 Volkswagen Golf SportWagen.

And that means it is now using VW’s fantastic MQB architecture, and the benefits of that are almost endless. It weighs less, is more economical, and despite shifting from Jetta to Golf nameplates, it even has about the same amount of space inside.

We’re certainly okay with the expansion of the Golf lineup, as it has always been one of our favorite cars. But what we’re not fine with of course, is the recent news regarding Volkswagen’s deceptive practices when it came to getting their TDI diesel’s emission’s certified. 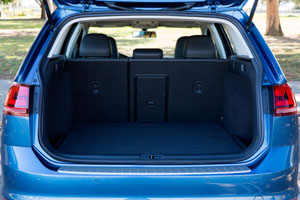 We spent time in a urea-injected TDI equipped SportWagen back in the summer, before all of this came to light. And averaged 37.0 miles-per-gallon, which is actually better than the Combined Government Fuel Economy Rating of 35, to go along with 31-City, and 42-Highway.

We’ve always been huge fans of the TDI and have always gotten exceptional fuel economy results, but perhaps in retrospect we should have known it was almost too good to be true. It’s not a total disaster however, as independent testing has concluded that with a software fix, fuel economy might decline as little as 5%.

Ultimately it will be the consumers that will decide the TDI’s fate when and if Volkswagen gets things sorted out.

We also drove a TSI-equipped gasoline fueled SportWagen; and here we also bested expectations, averaging 33.3 miles-per-gallon of Regular. The official Combined is only 29, with 25-City and 35-Highway. Its legitimate Energy Impact Score comes in at 11.4 barrels of oil consumed yearly with CO2 emissions of 5.0-tons.

The 1.8-liter I4 in the TSI is rated at 170-horsepower and 199 lb-ft. of torque and is available with either a 5-speed manual or 6-speed automatic transmission. 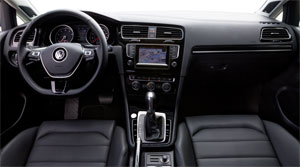 Compared with a Golf 5-door, there’s 12.0-inches of additional length, yet it rides on a wheelbase that’s actually been shortened by a bit. Overall length, however, is almost exactly the same as the departing Jetta SportWagen.

As far as design, there’s only so much you can do with the two-box wagon shape, the Golf’s take is without a doubt more purposeful and less bloated than the Jetta’s.

The forward portion of the interior doesn’t depart at all from the simple Golf theme, and we’re just fine with that. Material quality is good, and seat comfort better than expected.

Cargo capacity in the hold is down slightly to 30.4 cubic-ft., but after dropping the rear seat backs, the space expands to 66.5 cubic-ft. And that’s much more space than all of the rapidly growing subcompact crossovers have to offer.

And it’s much more fun to drive as well. Here at the track, it was as capable as we hoped, and handles way better than a car this big should. The extra 100-pounds or so of weight over the hatchback did nothing to compromise handling here; or ride quality on the way back to the office.

0-60 times were quicker in the TSI, as you would expect, though not by much. 8.7 TSI, verses 9.0-flat for the TDI. Both are a little sluggish off the line, while they wait for their turbos to spin up the boost.

So naturally, the TSI completes the 1/4-mile more quickly as well; taking 16.2-seconds to trip the lights at 88 miles-per-hour. Stops from 60 averaged a good 125-feet. Brake feel was great and fade was minimal.

With all of the pricy cars we test these days, at $22,215; the Golf SportWagen packs about everything you could want in a tidy, highly affordable package. 2016 editions tack on only a couple hundred dollars more. For the time being, the TDI is not available pending recertification. Expect about a three grand premium when it returns.

So, while VW’s deception has certainly tempered our enthusiasm for the 2015 Volkswagen Golf SportWagen, and it’s in fact difficult for us to recommend any Volkswagen at the current time, the SportWagen is still a good idea. But even good ideas need the proper timing to be great ones.