In the more than three decades that MotorWeek has been on the air we’ve seen electric cars grow from homemade curiosities, to mass production icons. But, the public appetite for pure EVs remains stymied over range and cost. Both problems that plug-in hybrids are better able to solve. Still, most PHEVs haven’t been very exciting to drive. But what about this plug-in…the BMW i8… This futuristic concept car brought to life certainly looks exciting. So let’s see if it drives that way.

Looking like it just drove off the set of Buck Rogers in the 25th Century, comes BMW’s first take on an integrated plug-in hybrid, the 2015 BMW i8. It looks like nothing you’ve seen, yet somehow appears exactly what you’d expect an advanced hybrid from BMW to look like.

Like everything else you see, the hybrid hardware is BMW’s own design and has both front and rear axle power sources that work both separate and together. 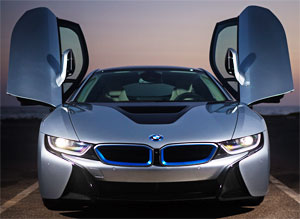 Driving the rear wheels is a 1.5-liter turbo-I3. Yes folks, it has come to that, a 3-cylinder engine in a supercar. And, yes again, it’s the same engine used in the new MINI Cooper. Placed forward, with power for the front wheels is a more expected 96-kW electric motor that draws from a water-cooled 5.0-kWh lithium-ion battery pack lying low in the chassis.

Working in harmony, they produce 357-horsepower and 420 lb-ft. of torque. And much like a traditional hybrid, a high-voltage starter/generator attached to the gas engine does double duty by feeding power back into the batteries. BMW claims that when in Sport mode, every mile you drive adds one mile of EV-range. Talk about having your fun and economizing it too.

The battery can also be charged on 110 or 220-volt circuits.

While the power distribution is constantly shuffled between the axles, you can plan on strictly EV operation only if you take it easy on the throttle at speeds up to 75 miles-per-hour. Step into it and you’ll hear the internal combustion party start behind you.

You can also manually engage EV-mode. The government rates the range at 15-miles. But much like the Chevrolet Volt, you’ve got about a 300 mile range on just gas after that.

Amazingly, BMW was able to keep the i8 iLooking remarkably like the original concept car, even retaining the scissor-wing doors and Carbon Fiber Reinforced Plastic passenger cell. With that and extensive use of other lightweight materials like magnesium and aluminum, the i8 weighs in at 3,285 lbs.

Because of those doors, getting in and out can be a bit of a challenge, like many supercars; and yet another reminder that this car is much cooler than we are. 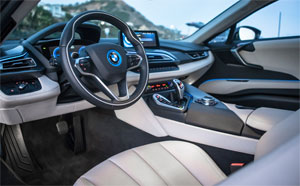 Once in, some found the seats very comfy, others not so much. But all agree the seating position is very low. Shorter drivers could not see over the nose which made tight maneuvers scary.

Navigation and most expected high-tech comfort and safety amenities are standard, and we applaud the use of familiar controls right off the BMW parts shelf. And that even includes the iDrive central controller. Also on the console are a simple electronic shifter, Driving Experience Control, and eDrive switch.

Looking cool is one thing, but driving down the road the i8 is very cool as well. There’s plenty of engine noise electronically pumped into the cabin and it certainly doesn’t sound like a 3-cylinder. Engage Sport Mode and you’ll get a whole new level of responsiveness, both from the throttle and throughout the chassis.

Transitions between gas and electric drive are fairly smooth, though there are times when getting real aggressive on the throttle results in the car taking a second to process where to send the power. But other than that, it’s a mostly seamless affair. Brakes are very touchy in the usual electric-drive manner.

As for acceleration, with launch control engaged, we hit 60 in 4.4-seconds. There’s instant torque off the line and shifts from the 6-speed automatic transmission came in a hurry. Those shifts are very firm and quick, and had us thanking BMW for not succumbing to a CVT as we worked our way to the end of the ¼-mile in 12.9-seconds at a thrilling 110 miles-per-hour.

The suspension is also a mix of something old and something new. The design is double-wishbone front and 5-link rear, but dynamic damping control and electric power steering are standard. Combined, they keep the i8 flatter than Kansas through the corners.

Combined Government Fuel Economy Ratings are 28 MPG for gas-only driving; that’s about 20% lower than the Volt, with 76 MPGe for i8 gas-electric operation. We drive mostly in Sport mode and recorded 33.5. Our Euro-spec model prevented proper plug-in charging so we think owners will likely double our test figures.

We’ve certainly entered a new era of supercars. Lightweight, small-engine, electric-assist wonders that aim for high fuel economy just as much low 0-60 and lap times. And while the i8 is far from being the ultimate straight-line performer, its $135,700 price tag is only a fraction of the price of most other high performance plug-ins.

So after driving BMW’s view of the future, we can absolutely say that the 2015 i8 will forever change the way you think about plug-in hybrids. And with cars like this, it’s clear that gasoline, electric, and high performance, can smoothly live together as one.