BMW’s X6 sought to bring 4-door coupe-like style into the SUV market. And while it has found quite a few fans over the years, most SUV buyers aren’t necessarily into trading more money for less practicality. Still, BMW is pushing the trend further with the new x4. So, let’s see if smaller is better.

It’s no secret that the more vehicles a manufacturer can build off a single platform, the more cost effective the architecture becomes. Is that reason enough to take the fine X3 Sports Activity Vehicle, and make it less useful, and call it the 2015 BMW X4?

Well, only BMW bean counters can fully answer that question. But, when the alterations produce a sportier and more stylish all-weather grocery getter, that’s even more fun to drive, then we warm up to it fast.

The X4’s driving dynamics are indeed improved over the X3, with a complete overhaul of suspension and steering hardware and software. It’s certainly more enjoyable than the average crossover, and more entertaining than even a few pure sport sedans. 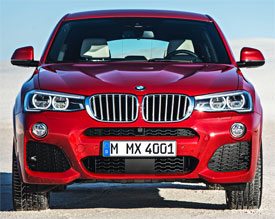 Whether on the windy back roads that we enjoy frequenting or highway commuting; it feels very flat, sturdy, and car-like, yet still incredibly smooth.

And unlike most of the BMW SAV stable, our staff actually enjoyed looking at it almost as much as driving it. Compared to the X3, the styling is smoother, sure, but also far more muscular. The X4 sits 1½-inches lower, sporting a wider and lower front fascia with larger intakes, and dons more aggressive sculpting over the rear wheels.

The roof begins arching down just behind the front seats, leading to a tall, flat rear, with minimal back glass. Visibility is compromised by all of that low hanging metal, but not nearly as bad as you would think, and a back-up camera is optional. It needs to be standard.

Engine choices are standard BMW fare, the 240-horsepower 2.0-liter turbo-4 in the xDrive28i; and the 300-horsepower 3.0-liter turbo I6 in the xDrive35i. The latter, also with 300 lb-ft. of torque. A familiar ZF 8-speed automatic continues to expertly handle transmission duties. And unlike the X3, no sDrive rear wheel drive only variant is available. All X4s come with xDrive.

Like most luxury items that trade status for practicality, cargo space falls from 27.6 cubic-ft. in the X3, to 17.7 in the X4. There’s also less leg room both front and rear. Though BMW’s available Smart Opener, which follows Ford in allowing hands free power lift-gate operation with a wave of a foot, is a welcome useful addition. 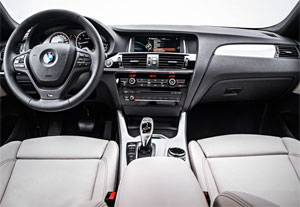 But, all shortcomings are forgiven when you mash the throttle and rocket to 60 in just 5.1-seconds. No traction problems with xDrive’s immediate hook up.

Torque arrives in a big hurry and stays prevalent throughout the rev band, sounding great the whole way. Shifts are fast and firm with no power drop off; the ¼-mile takes 13.7-seconds, finishing at 100 miles-per-hour. Brakes also delivered impressive results, with a stopping distance of just 111-feet from 60, despite a soft peddle with little feel.

But let’s get back to handling. And, what we found to be great on the street proved even more so on the track. While great handling is why we love BMWs, even those that see them only as status symbols will appreciate the secure response the brand puts into every vehicle it makes, X4 included.

Plus, dial in Sport+ mode and this 5-door feels a lot more like a 3 Series sport sedan than any utility. There’s plenty of chassis stiffness, lots of agility, very little body roll, and light but precise steering.

Even at higher speeds where most utilities turn to mush, the X4 is quick to dart in and out of the cones; though traction control will kick in moderately if you’re too aggressive. 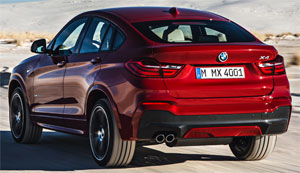 Government Fuel Economy Ratings come in at 19-City, 27-Highway, and 22-Combined. We kept the pace daily driver-like and averaged 24.1 miles-per-gallon of Premium.

So, why would anyone chose an X4 over an X3? It could be just for style, or just an allergy to practicality. As for us, we’d choose it because of how it looks and drives. So, it’s more than just a money grab for the fringe small luxury crossover buyer.

The folks from Bavaria prefer hauling through corners rather than cutting them; and that’s clearly the case here. The 2015 BMW X4 is a better, meaner X3.