Some days around MotorWeek are like Christmas. We roll into work all sleepy eyed and full of wonder of what the day will bring. And low and behold there’s something new and shiny in our parking lot just waiting for us to unwrap.  Well, today was extra special because it looks like Santa has dropped off not one but two Callaways for us to play with!

We’ve clearly played our cards right, as this pair of Callaways easily beats a full house of just about any other type of automotive art.

GM has been very busy lately, debuting the 7th generation Corvette Stingray, and bringing the Camaro Z/28 back into the fold. Well, that just means the engineers at Callaway are working even harder.

At the heart of this 2015 Callaway Corvette SC627, is an Eaton TVS2300 rotor pack inside a 3rd generation Callaway supercharger housing with not 1, but 3 intercoolers. 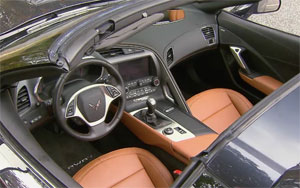 And it does indeed feel like a fire breathing monster off the line. Launching is done at not much more than idle, pushing your adrenaline aside as you apply judicious amounts of throttle until forward progress is fully established.  Things do become a bit tamer after quickly grabbing 2nd gear as your peripheral vision begins to blur.

No suspension work has been done to this Callaway Stingray, but the chassis was already primed to play with much more power than GM dealt. The rest of Callaway additions are limited to trim work.

For the exterior, that means a cutout in the hood for the supercharger and double-D exhaust tips if you add the optional sport exhaust system. Even the Stingray badge gets a muscled up look.

Now, if we have one quibble with the mods, it’s with the exposed supercharger. The powder-coated metal looks too much like plastic and doesn’t quite match the sharpened look of the rest of the car. Interior updates are limited to just some stitched logos and plaques.

If there’s one thing we’ve always praised Callaway for, it’s that they’ve consistently been able to fully retain the Corvette’s civilized daily driver nature. That doesn’t change here, as it feels positively tame on the street… until, that is, you dig heavy into the throttle.

This is the first new Stingray we’ve tested with the factory, see-through roof panel, and we found some annoying creaks that weren’t present with the standard carbon fiber topper. That’s certainly no knock on Callaway, and was the only noticeable blemish in this otherwise super tight car.

So, as much as we liked the new Stingray before, there’s much more to like now. Callaway will have to stay on top of things however, with GM’s own “more power” answer, the Z06, due soon.

Here the Eaton TVS2300 is planted on an LS7 V8, sprouting horsepower from 505 to 652, and torque from 481 to 620 lb-ft. Also included are high-flow fuel injectors, carbon injector covers, and a new intake.

With far from garden variety output, and yes the numbers top the ‘vette, this Camaro is much more difficult to launch. But when you do find a good hookup, you’ll be at 60 in 3.7-seconds. Now, that’s actually slower than the ‘vette as the Camaro is heavier.

Also, like in the ‘vette, there are no suspension updates, but already being the most track worthy Camaro ever, the Z/28 had no problems navigating our track…

…and it also gets some interior embroidery and badging.

These are more than just cheap thrill rides; they are, as Callaway loves to say, “powerfully engineered automobiles”. So expect to pay if you want to play. The Corvette SC 627 adds $17,995 to the price of a Corvette Stingray. For the SC652, you’ll have to add $19,995 onto the cost of a Camaro Z/28.

Big time performance from people that know it intimately. That’s what these 2015 Callaways are all about. Turn-key, street legal, pavement melters, ready to both rock the strip, and still comfortably roll your way to work. These bowtie bad boys are Callaway’s gifts that just keep on giving.