Over the last 50 years, the GM, Ford, and Chrysler muscle car wars have had their ebbs and flows. But with the Challenger’s rebirth for 2008, the Camaro for 2010, and an all-new Mustang dawning, the battle is at a fever pitch. All parties are lobbing ever more potent missiles across the border with increasing regularity. And one of the latest, the Chevrolet Camaro Z/28, has GM shooting for the stars.

When the original Z/28 performance package became available for the 1967 Chevrolet Camaro, few people had interest in turning their Camaros into track ready pieces, unless they had SCCA racing on their agenda. Thus, those originals are extremely rare and desirable.

Well times have changed, but no less desirable will be this all-new 2015 Chevrolet Camaro Z/28. In similar fashion, most of today’s buyers will probably not have racing or even track time in mind, but people are much savvier today about what it means to own the most track-capable Camaro ever.

We could fill our test with all of the updates that it has received; but bottom line, if it’ll help it get around the track faster, it’s been addressed. Still, here’s a partial rundown… total revamping of suspension, carbon ceramic brakes from Brembo added, aero elements optimized, and additional downforce obtained. 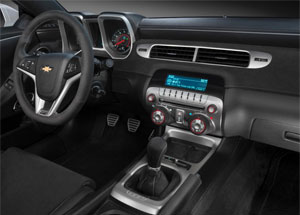 And along with those additions, some civilized interior features have been eliminated to shave weight. The back seat is lighter by 9-pounds with the removal of the pass through and using different seat foam.

Sound deadening has been removed throughout the car, as has the carpeting in the trunk; where the tire inflator kit has also been eliminated, and a smaller battery installed. Getting rid of air conditioning and all but one radio speaker completes the interior’s diet.

In addition, there are no HID headlights or fog lights and the back glass is thinner. Still, even with those extreme measures, the Z/28 is only 55-pounds lighter than an SS 1LE. But, it’s 300-pounds less than the big boy Camaro ZL1.

Need more? How about 305-series rubber. Oh, that’s up front, as well as in back, on 19-inch wheels, making for a contact patch about as big as you can get on the street.

Pumping the power, is GM’s naturally aspirated 7.0-liter LS7 V8 with 505-horsepower and 481 lb-ft. of torque, and you have no problems hearing it outside and inside. The LS7 sends that power through a Tremec TR6060 6-Speed manual, and spent gasses through an active 2-mode exhaust with high-flow converter.

With all of that in mind, we put in some hot lap research time at GingerMan Raceway in Western Michigan to qualify the results. Which are grip, grip, and more grip. 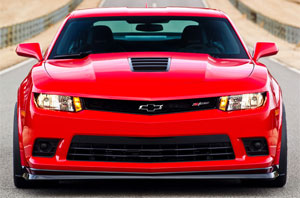 In corners both tight and sweeping, it was easy to find the car’s limits, feeling very much race car-like. But, even though you can clearly sense them, it can also be easy to go past them. The chassis however, is almost telepathic on when those transitions will take place, so things are easy to control, and the damping seems spot on.

On the hardware side, there’s a Torsen limited slip differential and Dynamic Suspensions Spool Valve dampers; along with stiffer springs and bushings. As for the software, GM’s Performance Traction Management delegates power delivery and electronic assistance; and with 5-levels to choose from, much like many companies, there’s more levels of management than most people need.

When working the trans both into corners and down the straight, the shifter feels beefy and gears are easily selected at speed. Not much to say about the brakes other than that they are simply phenomenal.

Believe us when we say that if you’ve ever thought of turning your Camaro into a track car, there’s no way you could do it this well or this cheaply by yourself.

Now, if you’re thinking of buying the Z/28 just to look cooler and improve your poseur quotient, you’ll probably be disappointed as additions, though many are pretty subtle.

While it’s not new, the front fascia is altered thanks to the blocked off openings, hollowed out bow tie, and front splitter. There are understated aero treatments down the sides and around wheel openings, and finally a whicker bill added to the rear spoiler.

Pricing is nice and simple, $75,000 take it or leave it, though there is 1 option package available that adds the air conditioning back in as well as 5-more speakers for the radio.

Shaving weight and increasing performance is always a good play for the track, so it’s a no-brainer that the 2015 Chevrolet Camaro Z/28 is a serious contender. It not only does the fabled Z/28 name justice, but it’s a much better car than the big boy ZL1; much like the friendlier Mustang BOSS 302 is more appealing to us than the Shelby GT500. When it comes to Camaros… there’s none better than a Z/28.