While the Chrysler 300 has made quite a splash on the full-size sedan market, Chrysler’s mid-size 200 has not achieved anywhere near the same kind of impact. Mid-size buyers still seem to prefer their Camry’s, Accords, Fusions, and Altima’s. But, the Chrysler Group has been on a roll lately, and now is a perfect time to try again. So, let’s see if an all-new 200 will make a bigger impact in family sedan world.

The 2015 Chrysler 200 is clearly looking to establish itself as a more premium choice among mid-size sedans. Both by way of its graceful new skin and what lies beneath it.

The 200 is based on the same Alfa Romeo architecture as the Dodge Dart and Jeep Cherokee, only here wheelbase is stretched to new limits at 108.0-inches, with the platform growing a tad wider as well.

What does that mean? An impressive amount of space inside and a comfortable ride. Similar to the Cherokee, the 200’s rear sub-frame is isolated, so there’s a smooth attitude to the suspension that seems equally compliant over all roads.  Though for the most comfy results, stick with the base car’s 17-inch wheels as broken pavement became a whole lot more noticeable with the 19’s on our 200C test car.

New for this year, is available all-wheel-drive; a very efficient on-demand system with a Power Transfer Unit with clutch packs that can send as much as 60% of the power to the rear wheels when needed, and yet fully disconnects the rear axles when it’s not for minimal impact on fuel economy. 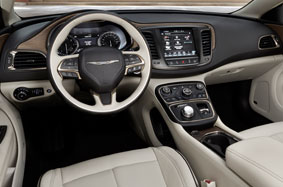 Inside the coupish-style greenhouse resides an interior with abundant soft touch materials. Even the base model is quite luxurious, with much inspiration taken from big brother 300.

There’s a great looking gauge cluster with 7-inch personalized LED display lodged between the blue backlit dual dials. The now familiar 8-inch Uconnect touchscreen interface is optional. But standard is an up sloping center console, favoring the Porsche Panamera’s, and it works just as great here as it does there.

Locating a Ram style rotary shifter far forward opens up extra console storage space as the cup holders slide under the armrest. A storage tray under the console highlights the Detroit skyline in relief; fully waving the “imported from Detroit” banner.

Front seats, while not as plush as they appear, offer decent all-day comfort. Despite the curving roof, entry and egress to the folding rear seats is a breeze. They are quite comfortable as well, with good room for two adults or three kids. Seats up truck space, at 16.0 cubic-ft., compares favorably to rivals. 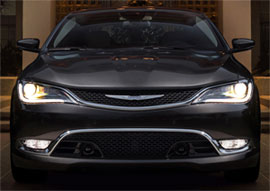 There’s a choice of two now familiar Chrysler engines led by the 295-horsepower 3.6-liter Pentastar V6. The standard mill is a 2.4-liter MultiAir2 4-cylinder that produces 184-horsepower and 173 lb-ft. of torque. All-wheel-drive is a V6 option only.

Having logged many Pentastar powered miles in recent years, we spent most of our early drive time in Sonoma County, California with the Tigershark I4. Power is acceptable, and the Cherokee’s 9-speed automatic transmission does its best to keep the engine in its sweet spot at all times. But with that many gears to shuffle through, it is highly active to say the least.

Chrysler sees the 200 as a straight up family sedan, not a near luxury intender like a Buick. But the near luxury case could certainly be made as the elegant design will assuredly stand out among generic sedan staples.

The round nose, with slender upper grille, large lower opening, and trim work that mirrors the winged logo, is to be the new face of Chrysler. Nice, even if it could be a bit more distinctive. Halogen projector beam headlights can be accompanied by LED tube signature lighting, or LED DRL’s.

Available safety measures include Adaptive Cruise, Forward Collision Warning Plus, and Lane Departure Warning Plus, all part of the SafetyTec package and they’re aided by dual cameras mounted up front. The 200 also offers parallel and perpendicular parking assist.

Playing catch up to the big boys in America’s dominate sedan market will not be easy. But truth be told, the segment has never been riper for the picking. Recent dynamic entries like the Mazda6 and Hyundai Sonata have shown there is room for fresh blood. And, the much-improved 2015 Chrysler 200 is just that. And with a little luck, this “import” can become a home grown hit.

The good news keeps rolling for us, as we welcome the Chrysler 200 to our MotorWeek fleet. This all-wheel drive 200C packs a ton of luxury features and comfort into its contemporary styling. The 295 horsepower V6 and 9 speed automatic also keep it ahead of most rivals. We’ll get a clearer picture of the 200C in the coming months.

American luxury is not just a Cadillac and Lincoln thing, and our Chrysler 200C is the rolling proof!

Even with Chrysler’s move to become a more mass market brand, the interior is very premium in look and materials, and makes driving a midsize family sedan not a chore at all.

After 4,800 miles we’re seeing decent fuel economy of 23.8 miles per gallon of regular. 28 is typical for highway travel.

The one negative we’ve found is that on rougher interstates, the interior noise level is quite high.

Still, this 200C is proving to be a very pleasant mid-size ride.

A Pentastar 295 horsepower V6 moves our “Velvet Red Pearl” two-hundo with gusto, and we’ve found it equal parts smooth highway cruiser, and snappy hotrod when you really dig into the throttle. The nine speed automatic is an acquired taste – a bit undecided and hard to swallow at first – but things get better as you learn its balance, and just let it do its thing.

With winter’s endless snow now gone, the all-wheel drive system has gotten a breather. And as the temperature climbs, so too has fuel economy, to 25.2 combined miles per gallon. It’s well above the official Combined rating of 22, and we’re fans of that as well.

We’re also still fans of the great interior. Lots of comfort and clever storage, while not being luxury car pretentious. Some controls and switchgear feel a little cheap, but most materials feel premium, and are holding up well.

We expect things to stay that way, as we’ve still got lots of time and mileage left with the 200.

And, staffers still have a lot to say. The 200 gets repeated high marks for its quiet and smooth ride, and generous power. Most love the simple controls and their functional layout. They’re smartly positioned for minimal distraction. And a physical tune knob for the radio is a small feature that goes a long way.

As for the 9 speed auto, some drivers still complain about a jerky feel in stop and go traffic. But, no issues when things are in sync, and the 295 horsepower, 3.6 liter V6 is able to rev freely. Fuel economy has dipped slightly to 24.5 miles per regular gallon combined. Chalk that up to an already hot Maryland summer and liberal use of the A/C.

We clearly like the Chrysler 200, and understand why its sales are also hot, while other mid-size sedans are not.

And this update comes after some long-mileage trips, where the 200 got to see all of I-95 from Maryland to Maine. As a result, fuel economy shot up to 26.4 miles per gallon.

Some first time drivers of the 200 take issue with the 9 speed automatic, finding it still hesitates when hunting for gears.

But that’s about the only complaint, as the rest of the logbook is filled with praise over the comfortable, quiet ride and ample space.

One note, we did take our 200 in for a software update for the touch screen UConnect system to address recent issues over hacking and remote control. Better be safe than sorry!

Fuel economy has improved since we last checked in, with the 3.5-liter V6 CVT combo now delivering us 23.7 miles-per-gallon of Regular. This is our fifth checkup on the 2015 Chrysler 200, and despite it’s now nine month stay, our comment book hasn’t stopped filling up.

It’s a mixed bag of hits and misses, this time around: for the positive, drivers still find the UConnect system one of the best to use; especially with the well-integrated steering wheel controls allowing easy switching between radio stations and volume levels. Ditto for the big knobs in the center stack.

The nine speed automatic still draws the ire of staffers, however, and its hesitation in gear selection continues to mar an otherwise smooth and pleasant ride. Paddle shifters do help, though.

Fuel economy is trending downward, though at 26.1 miles per gallon, it’s still well above the fed’s Combined number, and none too shabby for a 3.6 liter V6 with 295 horsepower. Here the 9-speed does pay off.

First, by the ride quality. Inside, it’s cozy and comfortable. Materials are holding up well, and it’s still our go-to car for long road trips.

Which might explain our rising fuel economy – now 27.1 miles per gallon of regular. That, from a 295 horsepower 3.6 liter V6 that delivers a menacing growl and good pickup.

We already learned the all-wheel drive’s strength last winter, as the 200 tackled a massive February snowstorm right upon its arrival at the office. So we have no fear heading into this winter season. Bring it on, Mother Nature!

We’re marking one year and 20,000 miles with our Chrysler 200. That’s a long distance, and a long time for the logbook to fill up with comments.

The positives? The 295 horsepower 3.6 liter Pentastar V6…smooth power, and plenty of it in reserve. Next is interior comfort and appointments, and the UConnect system’s ease of use. All making for a pleasant time behind the wheel.

Fuel economy checks in at 26.6 miles per gallon; a slight drop, but still above EPA estimates.

So what’s grinding our gears? The nine speed auto continues to hiccup, and some drivers are still adjusting to the rotary shift knob.

All in all, though, we’re loving our time in the 200. A great mid-size family sedan.

There’s a lot to love about its 295 horsepower 3.6 liter Pentastar V6. Good get-up, it sounds great, and an all-wheel drive system that’s better than most crossovers! Final fuel economy rests at 26.6 miles per gallon, another bright spot.

Styling was hit-or-miss with our staff, but all loved the comfy and well-appointed interior, with lots of usable storage.

We’ve commented ad-nauseam on the nine speed auto, and our final conclusion is: it’s not ideal, but you get used to it. And it certainly aids fuel economy.

Though the future of the midsize 200 is in doubt, with FCA outsourcing production, we’ll have fond memories of this very well done “Import from Detroit.”