The Dodge Challenger may be somewhat of the also ran in the Mustang/Camaro battle, but spend any time in this big, comfy bruiser and it quickly grows on you. Plus, in a coupe segment that thrives on nostalgia, it may be the most backward-looking of them all. But that doesn’t mean it doesn’t have its eye on where the pony cars are headed. And, Challenger intends on getting there, first.

American performance has always been most about “muscle”! So, to become even more of a challenger in the pony car arena, the 2015 Dodge Challenger gets an upgraded arsenal that includes tweaked styling, interior refinement, and, best of all, true “muscle car” power!

It’s the big HEMI that we have here in this Challenger SRT 392 and it keeps the cam in block where it belongs, helping the engine feed out 485-horsepower and 475 lb-ft. of torque. Both numbers up slightly over last year. A 6-speed manual is still standard, but buyers can opt for the segment’s only 8-speed automatic; a TorqueFlight ZF unit with paddle shifters and Street, Sport, and Track modes.

Now, even bosses have bigger bosses, and in the Challenger’s case, that’s the new 707-Horsepower Challenger SRT with HEMI Hellcat. We’ll have much more on this one at a later date, so stay tuned. 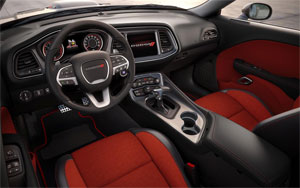 For now, let’s look at the one area that the Challenger clearly has an advantage over both the Mustang and Camaro. And that is inside the cabin, where there’s an irrational amount of comfort and space, even for those well over 6-foot.

The dash layout is great, ticking all the right boxes of being nostalgic, highly functional, and nice looking. Being an SRT model, there are plenty of specialty items added into the mix. Included: newly improved sport seats, re-designed steering wheel, and our favorite… Performance Pages on the 8.4-inch UConnect screen.

Like the rest of the car, the gauges look both retro and high-tech; with big dials and programmable info screen. Opt for the Premium Audio Group and you’ll get a full on aural assault from the 900-watt Harmon Kardon 19-speaker system, including dual subs in the trunk. There’s still not a lot of room in the back seats, but there’s just enough comfort in them to imply that they are more than just afterthoughts.

All of that interior comfort also transfers over to the driving experience, where the ride is “parade float” soft. You’ll have to consider engaging the Sport drive mode as part of the startup procedure if you’re looking for a stiff performance-oriented ride.

Go one step further for Track mode, and things get serious. Grip through corners becomes Velcro-like and things stay firm and flat as a brick throughout the slalom. Not too many vehicles have such an obvious discrepancy between driving modes, but Challenger SRT has the ability to truly drive like three different cars. 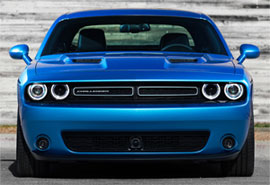 No matter which mode you’ve got dialed in, putting the accelerator to the floor will result in some immediate wheel spinning as you try to get off the line. Programmable launch control is available to help, but there’s only so much electronics can do. Eventually, after finding some traction we were able to hit 60 in 4.7-seconds.

Our automatic shifts were not nearly as harsh as we were expecting, yet they are incredibly quick; as we made our way through to the end of the ¼-mile in 12.8-seconds at 106 miles-per-hour, all the while accompanied by a macho 70’s soundtrack that would make Mr. T proud. Thanks to the biggest brakes ever standard on a Dodge, stops from 60 took place in a short 109-feet.

Styling updates for ’15 are mostly constrained to new front and rear fascias; but despite a design that draws heavily on nostalgia, the result still looks fairly fresh… and menacing. But having said that, the “made-to-fade” plastic exterior trim was a no-go for some of our staff, fearing that the hood scoop, lip spoiler, light surrounds, bumpers, and window moldings would all eventually turn to Jeep Wrangler fender gray.

Government Fuel Economy Ratings are 15-City, 25-Highway, and 18-Combined; and our average of 18.1 miles-per-gallon of Premium is certainly not great, but acceptable for a muscle car. But that does result in a poor Energy Impact Score of 18.3-barrels of annual oil consumption with CO2 emissions of 8.0-tons.

So as the pony car wars rage on with ever building intensity, it’s certainly too early to declare a winner. But if there’s one combatant that makes a good case that modern muscle and family comfort can coexist in a single bad-to-the-bone coupe, it’s the 2015 Dodge Challenger SRT 392.