50 years have passed since the Ford Mustang entered the corral, creating the iconic pony car segment. While a lot has changed since then, the Mustang really hasn’t changed that much at all. But as Ford launches the all-new, 2015, 6th generation Mustang, it does so with some of the biggest changes ever. So, saddle up, as the legend of Mustang continues anew.

The 2015 Ford Mustang is arriving at just the right time. Car sales are back up to pre-recession levels, and the original pony car has been facing some the toughest competition ever from the re-launched Chevrolet Camaro and Dodge Challenger. In addition to that, this will be the first Mustang with true international sales intentions.

Powering this mission are three engines, each with more than 300-horsepower. The 5.0-liter V8 is back of course, now with more muscle…435–horsepower…thanks to tweaked cylinder heads and intake. The 3.7-liter V6 also returns; with its intake redesigned, due to a lower hood. It results in a loss of horsepower, now at 300 even. 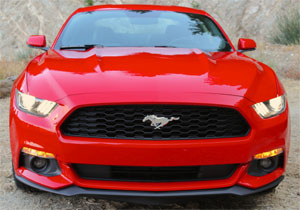 Transmissions hang with tradition, a 6-speed manual or 6-speed automatic for all engines.

Styling, always a Mustang fan hot button, is less altered than originally feared. Retro-reinvented, the Mustang 6.0 is lower, wider, and even with a familiar long hood profile, far more aggressive. Wheelbase stays at 107.1-inches and overall length is shortened by 2/10ths of an inch.

The blunt nose and hallmark grille opening are tweaked to fit the rest of the Ford brand. There’s new HID headlights, and a fresh take on LED signature lighting.

There’s clearly more of a fastback shape towards the backend, and the new rear fascia is “euro diffuser” in design. The glossy tail light panel features updated horses for 4 & 6 cylinders, and a GT badge for V8s. The 3-bar tail lights return, but look more 3-dimensional. Turn signals are still sequential.

17-inch wheels are standard, GTs get 18’s; 19’s are optional on any. Brembo brakes come with GT or EcoBoost Performance Packages.

A classic appearance continues inside too, with the dual hump dash. But, gauges, the center stack, and electronic aids are much more in the now. You’ll also find better materials, more knee space thanks to a slimmer lower dash, a passenger’s side knee airbag, and there’s even more room in the glove box.

Toggle switches and a start button are brought into the mix, and cup holders have been shifted over providing freer access to the shifter. Even base models get keyless entry and a back-up camera. 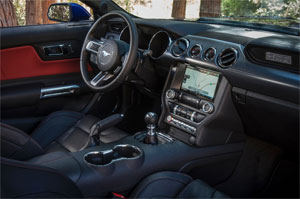 Selectable drive modes are new, adjusting steering effort, engine and transmission response, as well as stability control intervention for normal, snow/wet, sport, and track conditions. And of course there are track apps, accessible through the gauge panel information screen, as is Launch Control.

The steering wheel is smaller in diameter, but gets lots of new switchgear added to it. The trunk opening is larger, and the amount of space behind it has grown a tiny bit, now at 13.5 cubic-ft.

Nostalgia aside, we found the new-gen ‘stang is now much more about driving with the much anticipated independent rear suspension now standard on all models. You don’t really notice it in sedate daily driving, however. But, dive deep into a corner, start feeding in some power, and the car hunkers down, propelling you out like never before.

Should you encounter a bump mid-way through that corner, it becomes even more obvious; as the rear end is a whole lot less busy, happy to follow in line instead of trying to overtake you every chance it gets. Such a big change out back forced Ford to extensively rework the front suspension as well. That’s a win-win too.

As for how the Mustang feels with 4-cylinder power: it feels just fine. There’s good response, great mid-range torque, and even some respectable sound, though not at full song.

Nothing sounds like a V8 of course and the GT is still where it’s at if you’re looking for Mustang bragging rights. Manual 0 to 60 nudges four and a half seconds. Drag racers, or the burnout challenged, will also be happy to hear that all GT’s come standard with a line lock.

We think the 2015 Ford Mustang, while a little less nostalgic, is much farther reaching, even without its international sales intentions. It is clearly a much better sporty coupe than ever before, and not just in the margins. And that progression will ensure that the Mustang legend will not only live on, but continue to lead.