Honda’s American heritage of selling small, roomy, fuel efficient cars, that last for almost forever, is well known. Right from the first civic forty years ago, Honda’s subcompact and compact cars have always provided more in less. But, today, it’s the Honda Fit that carries the banner of maximizing everything but its shadow. And, while the all-new 3rd generation has changed a lot, it’s more “fit” than ever.

We’ve always considered the Honda fit to be a small car that thought outside the traditional subcompact box. Its five-door shell surrounds an unusually airy interior that has proven to be as versatile as a small utility. Plus, driving the fit was not only economical but fun. An attribute most rivals lack.

Well, that formula is more than intact with the all-new third generation fit. In fact we’ll say the 2015 fit actually expands on itself. 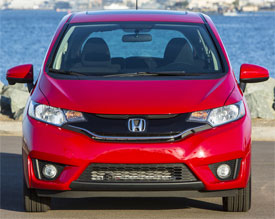 That “moreness” starts with additional power. There’s still a 1.5-liter i4 in place, but it’s a new direct injected mill with 130 horsepower, 13 more than before. Torque is cranked up 8 to 114 lb-ft. It joins the Honda “earth dreams” lineup with updated transmissions. The standard manual is now a 6-speed and the automatic is now a CVT.

That dream is realized in better fuel economy at 33-city, 41-highway, and 36–combined for the CVT, tops for its interior size.

This hatchback’s exterior theme remains the same, but the shape has been hit heavily with a buffer. It’s smoother with more sculpting to the up-sweeping bodysides, giving an overall sleeker, more dynamic look.

As for its shadow, there’s more wheelbase and width, but overall length is actually less by an inch and a half. The rear now sports a thick, full width chrome strip connecting the led tail lights; with red reflectors up both sides of the back glass to a hatch-top spoiler. A very aggressive looking rear bumper lies below. Standard, are 15-inch wheels; ex riding on 16s.

While that’s unchanged, the fit’s “more fun-to-drive than it should be” quotient actually grows. The unibody adds rigidity, and while the basic front strut and rear trailing arm suspension design remains, it has been totally reworked with updated components and geometry. Along with more precise handling, ride comfort also takes a turn for the better. 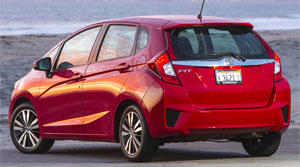 Honda claims a big improvement in overall driving refinement. And, after our initial drive at Honda’s press launch in San Diego, California, we concur. Except for maybe the new CVT transmission. Unlike the CVT in the accord, which operates pretty quietly, in the fit is just makes for a lot “more” noise as you move up to speed.

On the other hand, we found the 6-speed manual a great improvement, with short throws and a sporty feel.

But, the biggest uptick in the new fit is the additional interior room. While you do get a sense of it up front, it’s really apparent in the rear. A 1.2-inch gain in wheelbase expands to over 4-inches more leg room, with additional headroom. You have to sit in it to believe it.

The fit’s signature, multi-folding magic seat remains. It has always been one of our favorite fit features, allowing for some unique storage and seating options.

But, something had to give. The added legroom does cut cargo space by 20% to 16.6 cubic feet when all seats are filled. Still, seats flat, fit’s max cargo room of 52.7 is hard to beat with anything that’s not a crossover.

A 3-dial gauge setup carries over, but the center speedometer is larger and all information is presented more clearly. 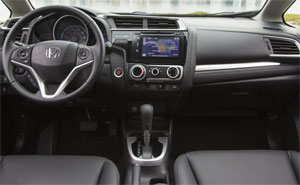 Though the interior presentation is still monochromatic and not overly inviting, there’s plenty more when it comes to standard features, with a multi-view back-up camera and bluetooth included. And definitely more luxury and safety options with lane watch, 7-inch display audio and push-button start all available. You can even get your new fit with leather!

Hondalink allows for even more smart-phone integration, and you do it more seamlessly. Iphone users can even talk to Siri. But we’ll need a little more time with it to see how much better it truly is. As before, analog controls are large, logically placed, and easy to use.

Much was publicized about the previous generation Fit’s “poor” IIHS score due to the new small overlap frontal crash test. Well, Honda took that as seriously as potential buyers and expects this fit’s new ace body structure with additional high strength steel to “ace” that test without a problem.

Honda has made significant investments in the new Fit, bringing assembly to North America at a brand new plant in Mexico. But, even with that expenditure they’ve contained base prices. It’s barely increased to $16,355 for a manual. The top-line EX-L Navi goes for $21,630.

The 2015 Honda Fit is indeed more “fit”, and will truly “fit” into many more lifestyles. It provides great versatility and practicality, along with a surprising splash of fun, and now even more so. And, aside from that loud CVT, the 2015 Honda Fit has the “fit”ting formula for even more success.