Another episode of MotorWeek, another new compact crossover to check out. Or so it seems of late. But wait, this one is also luxurious! Sorry for the cynicism, but with all the downsized, fancied up crossovers we’ve driven lately it’s a bit like our road test playlist is stuck on repeat. But, we haven’t heard from one of the kingpins of affordable luxury yet: Lexus. That in until now with their all-new NX.

The 2015 Lexus NX is just the latest in a shifting crossover landscape to smaller luxury-minded utes. It’s hard to say whether it’s the search for additional fuel economy or the realization that maybe we don’t need so much space after all that’s powering the shift; but Americans are buying into smaller utilities of all types in larger numbers.

And while the benefits are obvious, so are the compromises, as there’s less area to spread out, as well as less space for cargo.

Most interior measurements of the NX are very similar to the Toyota Rav4 on which the NX shares basic underpinnings. Except for cargo space which due mostly to a faster roof is much less, at 17.7 cubic-ft. behind the rear seats and 54.6 with them folded. 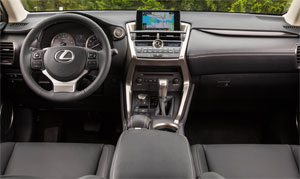 While unmistakably Lexus, the NX design is another clear step in the brands attempt to trade a soft image for a more dynamic one. Indeed, when you step inside things are much more “sporty” than over the top luxurious. Even the seats are sport-minded, yet still very comfortable. And the tight space with wide center console also implies sportswear more than business casual.

Rear seats however, feel more generous; and more in-line with what you expect in a luxury-minded crossover. And you can take it further still if you go the F SPORT route, which instead of the usual cow and tree materials, things go black and metallic.

Front seats are even more aggressive, and the LFA-inspired gauges, with boost gauge and G-meter, set the tone when you trigger the start button. There are aluminum pedals for your feet, a unique steering wheel with paddle shifters for your hands, and for your ears, Active Sound Control that lets you dial in as much engine sounds as you want.

Those sounds come from the first turbo engine ever in a Lexus. It’s a 2.0-liter unit with an integrated intercooler and exhaust manifold, and a twin-scroll turbocharger. Output is 235-horsepower and 258 lb-ft. of torque. 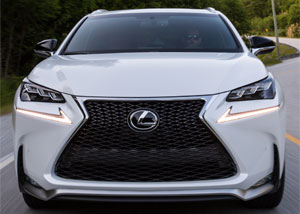 It’s a sweet engine. Both smooth running and quiet when you want it to be; powerful and aggressive when you don’t. And it works very well with the standard 6-speed automatic transmission.Lexus claims a 0-60 time of 7.0-seconds.

In addition, there’s also a hybrid NX 300h. It uses a re-tuned version of the Camry’s 2.5-liter I4 gas-electric system with total output of 194-horsepower. And like the Highlander, all-wheel-drive is available with the addition of a motor generator mounted in the stern that drives the rear wheels.

For our early drive time around Whistler, British Columbia we naturally chose the athletic F Sport and were not disappointed. Handling is great, nothing at all like the rolling couch-like manner of the RX. Handling is aided by the front axle’s “pre-load” differential.

But as much as we were enjoying the nimbleness, the rougher ride that accompanies it is a bit much for most buyers in this segment. The ultra-antagonistic look might also be a turn off, but the more time our eyes spent with it, the more they liked what they were taking in. Sharp angles are without a doubt the theme; and L.E.D.s are used for lighting both front and rear. Here again, F Sport brings even more to the table with a mesh grille, black side mirrors, and exclusive 18-inch wheels. 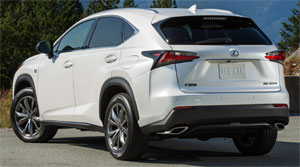 Pricing hasn’t been finalized as of yet, but we think a mid-$30,000 start would be just about right, based on other recent compact luxury entries.

One thing is certain. Lexus knows how to do plush, luxury crossovers well; evidenced by over 1-million RX sales. And while there is certainly a demand for a smaller version of the RX; the 2015 NX is not that at all.

In its continuing effort to replace some of the brand’s traditional opulence with excitement, Lexus has created a very dynamic looking and performing compact luxury crossover. And it looks like from here on out, instead of wondering whether they’ve gone far enough, people will be debating whether this time Lexus has gone too far.