The Subaru Legacy has been around long enough to actually have a legacy. That’s 26 years and counting as a comfortable, affordable, reliable family sedan choice. It’s also mirrored the legacy of the Subaru brand itself: delivering all-weather capabilities in a slightly quirky package. Well, an all-new Legacy is looking to update both histories, while also going a bit more mainstream.

The Subaru Legacy sedan has always labored in the popularity shadow of the Outback Sport Utility Wagon with which it once again shares a platform. So, what does the 2015 Legacy bring to the table to warrant more of the spotlight?

Well, for one thing, smoother, more mainstream styling. It looks like Subaru is taking a page out of the Honda Accord book by making the Legacy silkier, if also more conservative.

And that’s OK if, like the Accord, you design the car to be appealing as an entire package, and not just a shiny object of great desire that lacks good practicality and purpose. And, without a doubt, the Legacy has come a long way towards becoming that type of very desirable car. 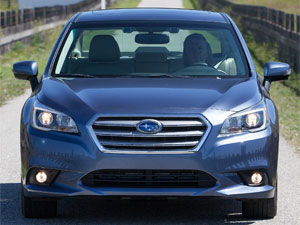 And perhaps that’s why they didn’t stretch too much on the powertrains as both engines carry over from last year. The 2.5-liter flat-4 sees a minor 2-horsepower gain to 175, and will still be the choice for most buyers. Our car’s very robust 3.6-liter flat-6 carries over unchanged with 256-horsepower and 247 lb-ft. of torque

No manual or traditional automatics are offered, as a CVT is the only transmission.  And it works surprisingly well this go around, being smoother with fewer…quirks!

Plus, it has helped raise the 6’s fuel economy numbers, though they still aren’t stellar; perhaps that‘s because all-wheel-drive is still standard. Government Fuel Economy Ratings are 20-City, 29-Highway, and 23-Combined for the six. We averaged 25.5 miles-per-gallon of Regular in a mixed loop of driving. If you don’t mind sluggish acceleration the 2.5 four has 30% better fuel economy.

At our test track, Subaru’s CVT performed quite well when combined with our snappy 3.6-six. The simulated shifting was strong and accompanied by a nice surge of power as the RPMs dipped ever so slightly. 0 to 60 was dispatched in a reasonable 7.3 seconds, and we ended the quarter-mile in 15.7-seconds at 92 miles-per-hour.

A much stiffer chassis and some honest to goodness heft to the wheel helps the Legacy also perform with more composure and sportiness than most rivals. Things are way more fun to drive than last year, with a definite hike in chassis feedback, and an overall demeanor that’s more Mazda6 than Camry.

Steering is quick and precise for both inputs and corrections, and handling prowess is aided by brake intervention Active Torque Vectoring. Overall braking performance fell back to about average, however, with some minor fade. Stops of 125-feet from 60 were smooth and straight. 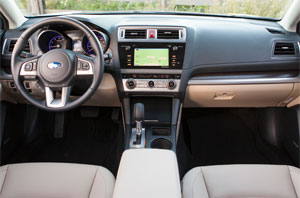 Things are well above average inside, particularly in Limited trim……and now we pause from this road test to say thank you, thank you, thank you to Subaru for finally putting in a non-frustrating navigation system. With this latest infotainment system, they’ve went from absolutely one of the worst units to one of the best.

Everything is clear, the colors really pop, and the street names are highly legible. Even the variable touch buttons work well. It’s a huge improvement both visually and functionally, and as much grief as we’ve given them over the years, we’d better spend some time praising, now that they’ve gotten it right.

Gauges are also both more informative and clearer, and again, thank you Subaru, for bringing back a real coolant temperature gauge. A backup camera is now standard on all Legacy’s too, but the feature packed Limited also gets leather heated seating front and rear, a 576-watt Harmon Kardon audio system, and blind spot detection.

Seats all-around deliver great comfort and most interior measurements are up just slightly; even trunk capacity climbs a little to 15.0 cubic-ft before you fold the split rear seats. 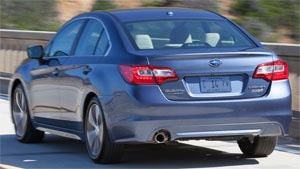 It’s clear to us that Subaru has listened to current owners and changed only what needed to be changed. The new Legacy may be less quirky, but in it stead is a high quality car that’s not nearly as sedate as it looks. Plus, even though it’s more mainstream, it still offers standard all-wheel drive, something still unique to the affordable mid-size family sedan segment. The 2015 Subaru Legacy deserves it’s time in the spotlight. We’re very favorably impressed with the result.