The all-new Subaru WRX just rode home with our 2014 Drivers’ Choice Award for best sport sedan. It simply delivered lots of serious thrills for the money. But we knew that the WRX was just a tease until the next WRX STI arrived. Well, it’s here! So, with our hopes flying sky-high, let’s strap in, and see if the next hot Subaru can make our smiles even wider.

Going down the spec sheet, the 2015 Subaru WRX STI checks all the right boxes for purists: rally grade suspension…a six speed manual transmission…over 300 horsepower…check, check, AND check. Yet for a vehicle of the STI’s heritage, predicated on back-to-basics, old school fun, this latest model does benefit from some new-age technologies, despite changing little else from previous generations…

Returning is the BOXER horizontally opposed turbo flat 4; 2.5 liters worth, and rated at 305 horsepower and 290 lb-ft of torque. Indeed it is the same engine, and the same output, that the STI faithful already know. And it’s mated to the very same six speed manual transmission, as well. Slight improvements for 20-15 reduce vibrations, and make shifts smoother between low gears.

Symmetrical All-Wheel Drive is naturally standard, as is the Driver Control Center Differential, which allows for mechanical and electronic control of the center diff through various settings. All this, combined with the helical limited–slip front diff, and the TORSEN limited-slip rear diff, basically translates to: GRIP. And lots of it.

New this year is Active Torque Vectoring, which works with the stability and traction control systems to apply a bit of braking while cornering. So what better place to experience all this, than at our test track?

Off the line power was easy to find, with a more manageable clutch than in our 2011 test. We just hooked up and flew to 60 in 4.7 seconds. Seven tenths quicker than the WRX. Then our STI punched through the full ¼ mile in 13.2 seconds at 104 miles per hour. 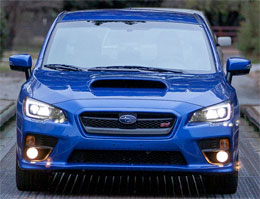 Where Subaru says they improved the STI the most is in handling. And indeed, through the cones it really comes alive. The added rigidly and a thoroughly retuned suspension, while a little more solid than before during commutes, really takes to tight switchbacks. The quickened steering ratio, now 13.0:1, adds precision and great feedback.

Getting to high speeds is easy in the STI, and luckily, so is slowing it down; taking a scant 108 feet from 60.

As with the standard WRX, the STI distances itself from the Impreza sedan on which it is still technically based. Wheelbase is also stretched one inch over the last STI, to 104.3 inches, and the A pillars and windshield are significantly more raked, offering both a more swept look and better visibility.

But what’s an STI without the wing?! It’s here, in full force, to augment the WRX’s hood scoop up front, and quad exhaust in the back. Our Limited tester’s 18 inch BBS forged alloy wheels came wrapped in 245/40 summer performance tires. But our inner “Mr. T” wishes we could have the Launch Edition’s gold wheels, and its WR Blue Pearl paint, and we pity the fool who doesn’t grab one of the only 1,000 in production. But we digress… 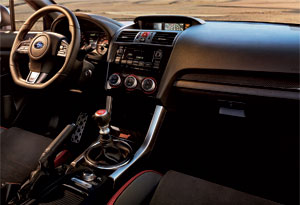 Government Fuel Economy ratings, are 17 City, 23 Highway, and 19 Combined. Even driving like we think owners will, our test loop of 23.4 on premium was better than expected.

Now it may seem to casual observers that the STI got left behind, as Subaru has been doling out the major overhauls everywhere else in their lineup. But while we always love something that’s “all-new”, there’s a certain charm to holding on to some of the “tried-and-true”. The STI has always been a showcase of exceptional performance with an accessible price; which is exactly why we love the 2015 Subaru WRX STI even more.