If you’re an automotive enthusiast, I know you are familiar with the concept of speed. If you’re a fan of sporting British cars, you may even be familiar with Bentley’s ultra-luxurious version of speed. Well, that clash of posh and performance happens in a way like never before in this Bentley Mulsanne Speed.

You might think that being a staid British brand with oodles of history, Bentley would refuse to change with the times, and you’d be very wrong. This 2016 Bentley Mulsanne Speed proves that they are moving the brand forward at a rapid pace, yet without leaving traditions behind.

This is of course, the bespoke Bentley chassis from Crewe that debuted for 2011, and shares little with parent Volkswagen unlike the rest of their lineup. 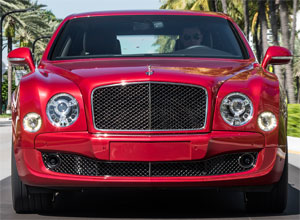 It’s very impressive what they were able to do with it. Sure it feels big, but not overly heavy, certainly not bloated, considering it is pushing 6,000 lbs. It’s a lot of mass, but with enough modern tweaking to not feel like a tank.

For this Speed version of the Mulsanne, the chassis’ air suspension gets a stiffer setting, as well as quicker steering. A custom mode allows for individual tailoring of all settings, as most Bentley customers are used to, I’m sure.

As for under the bonnet, the 530-horsepower coming from its 6.8-liter twin-turbo V8 is indeed impressive, but how about a “commoner kicking” 811 lb-ft. of torque? Output is bumped 22-horsepower and 59 lb-ft. due to reworking of the heads and a requisite software update.

An 8-speed automatic transmission with wheel mounted shift paddles is standard, but unlike Continental-based Bentleys this one is rear drive only.

The nostalgia theme plays a little heavier inside, where you can feel Bentley history oozing out of its hectares of well-treated calf skin and fine woodwork. 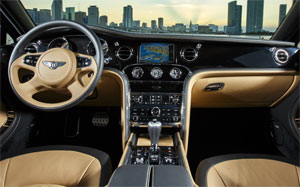 There remains plenty of traditional elements like the organ stops for the vents and an analog clock, but the overall ambience is more modern. And there’s certainly all of the latest tech gadgets like hideaway nav. screen, Naim for Bentley 2,200-watt audio, and a somewhat cumbersome central controller.

And in the back there’s even dual iPads with keyboards, television screens, and a refrigerated bottle cooler with frosted glass power door and yes, even Crystal champagne flutes.

The front center console is a bit control heavy, and the start button blends in a little too much. But it gives things a workman-like feel for that chauffer so he can do his business. Some of the controls and gauges are not obvious, but it helps if you enjoy bangers and mash or follow the goings-on in Parliament.

Front seats have great comfort, but extreme comfort is just the tip of the crystal-plated iceberg of what you’ll find in the rear. 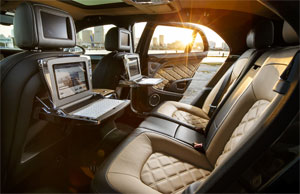 But as nice as it is back there, this is still a car you should want to drive, and will very much enjoy doing so; as it has a sporting feel that you won’t find in a Rolls-Royce. There’s effortless streams of engine power, with shifts that are as smooth as the silk of a Burberry scarf.

Though the electronic shifter carries on the British tradition of dawdling between shifts as it’s in no particular hurry to deliver a gear when shuffling between drive and reverse.

Things are quiet inside, but not with bank vault levels of isolation, as some nice if raspy exhaust note seeps in occasionally.

As for standing out from the common Mulsanne’s seamless metal work and exquisite touches outside; the Sport brings dark finishes to the grilles, headlights, and tail lights. As well as unique 21-inch wheels and rifled exhaust tips similar to the rest of Bentley’s Speed lineup.

How the Speed translates at the track, those big turbos, haul this hulk to 60 in under 5.0-seconds. Through the cones, initially it feels almost athletic; but just as quickly as you get through the first few gates, the weight and heavy steering catch up with you, reminding you how big this car really is.

Clearly made for people who demand the best, and are willing to pay for it; the Mulsanne Speed starts at $341,325. Pricey options pushed our car over 400K.

Let’s give Bentley a lot of credit, they’ve been able to inject modern elements into the 2016 Mulsanne Speed without losing any of their brand’s character. In fact, we think recent Bentley’s are more in line with their sporting tradition than ever. The few who get to experience it daily are the lucky ones indeed.