We all know the great reputation the BMW 3-series has made for itself over the years. But we also know that these days, that’s just not enough. There are far too many impressive rivals around to rely solely on your past performance as a marketing strategy. So, BMW keeps pushing the limits of both performance and technology. And, the 330e is the result.

Who knows what type of fuel will be powering our cars 100-years from now. But for the foreseeable future, there will be more and more vehicles like this 2016 BMW 330e iPerformance; that retain a traditional gasoline engine, yet combine it with some type of hybrid electric assist.

In this case it’s BMW’s 2.0-liter I4 turbo that combines with a 7.6kWh lithium-ion battery powered motor/generator to produce 248-horsepower and 310 lb.-ft. of torque.

While tailored just for the 330e, the plug-in hybrid hard and software comes from BMW’s i division that spawned the i3 and i8.

A true 8-speed automatic handles shifting duties, and this 3-series remains rear-drive only. 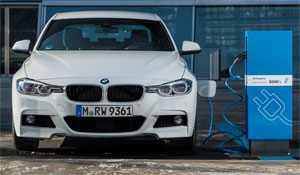 Recharging can happen as quickly as 2½-hours with a 240 Volt charger, or as long as 7-hours with at 120 Volts. The only downside is for those that don’t know how to pack light, as the trunk-mounted battery pack lowers cargo space from 17.0 to 13.0 cubic-ft.

Everything is packaged under the floor, so the practicality of full folding seatbacks is retained.

As for driving, it behaves how you’d expect a BMW PHEV to act; smooth, effortless, and better than most other plug-ins. Transitions between power sources are relatively seamless.

On the street, it feels a little torquier right away, but that sensation levels off quickly. And just as in the X5 xDrive40e, there’s a weird steering behavior that has us feeling that maybe the regular 3-series numb steering is not so bad after all.

Beyond that, it’s the same 3-series, we know and love; except for when you’re on EV-power alone. Like the most PHEVs, electric-only range is around 14 miles, enough for limited urban driving. But, at speeds up to 75 miles-per-hour. So, for the good and bad, it’s no Chevy Volt. 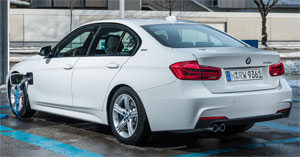 Plus, the regen braking is about as refined as it gets.

Drive modes perform the usual functions, as well as determine which power source is on line.

And just to be as clever as possible; if you’ve set a destination in the navigation system, BMW’s Proactive Driving Assistant will plan ahead and determine when to use battery power most efficiently. Fortunately, our ¼-mile test strip wasn’t in the nav. directory, so when we asked for all full, we got it; hitting 60 in 6.0-seconds flat.

It didn’t feel quite as torquey here, but there was enough boost that we struggled with wheel hop at launch.

The 330e has a soft feel through the corners, along with the slow and unengaging steering; but there’s still abundant BMW-type rear-drive fun to be had here, as well as plenty of power to oversteer at will.

At 116-feet; the average stopping distance, while quite short, was not as short as we expected. No doubt a result of the extra 500-lbs. of battery weight. 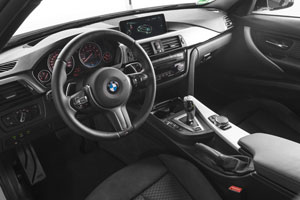 There’s not much obvious change to the familiar 3-series form. Styling remains aggressive and sporty.

And there are plenty of luxury touches inside. Most prominent, is the unique trim, and an eDrive button for selecting hybrid system drive modes.

Our Government gives the 330e a 72-Combined MPGe Fuel Economy Rating. Our average was only 29.0 miles-per-gallon of Premium, barely better than a standard-power 320i.

Still, it has a great Energy Impact Score; 5.8-barrels of oil use and 3.0 tons of CO2 emissions annually.

The 330e is priced around 10-grand more than a base 3-series at $44,695. So, it’s not about savings per se, but about a new kind of performance from a brand that remains all about performance.

Bringing a plug-in hybrid to market may not get you as much fanfare as it once did; but making it drive far better than the rest, and putting a roundel on the hood, could possible bring a full stop to the presses. One thing’s for sure, the 2016 BMW 330e iPerformance is just the beginning; as BMW puts as much effort into fuel economy performance as they have historically put into driving performance. And that’s a good thing for our enthusiastic road ahead.