From the “BMW is attempting to fully infiltrate every possible automotive segment, including a few only they inhabit, department”; comes a new pair of four-door sedans trying to mimic sporty coupes. While it’s no longer an original idea, BMW wants to make sure they’ve got all the stylish bases covered. So enter the 4 and 6 Series Gran Coupes.

While this pair of 4-doors, the 2015 BMW 435i Gran Coupe and the 2016 BMW 640i Gran Coupe are not exactly unique animals in the market place, they do run with a pretty small pack.

Starting with the smaller and newer 435i GC, where it slides in is complicated. If you need more practicality than a 3 Series sedan, but don’t want to step up to a 5 Series, and a 3 series wagon is a no-go, than the 4 Gran Coupe is for you. Our reasoning? Though its coupish styling includes four doors, what appears to be a trunk lid is really a hatchback.

So, once you get over the initial confusion, the 435i Gran Coupe is actually a very versatile vehicle that seems to deliver a lot for the money. 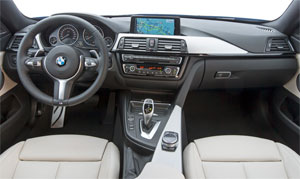 It’s also more attractive than similar-sized 5-door coupe/hatch offerings, helping us understand why premium hatchbacks are so popular in Europe.

On the negative side, we expected the low roof design to impede rear seat access and it did, but it also seemed to impede in the front as well.

Rear seat leg and headroom room are also not exactly plentiful, but not as bad as we expected either.

Of course, it’s driving that reveals the true story about this car; as it delivers the solid, “all you could ever want in a car” feel you expect from a BMW.

Except for the steering of course, which we continue to find too numb.

BMW’s M Sport package is a great addition as it gives you the look along with some of the performance of a true M, without the harsh ride penalty and killer sticker price.

Powertrain is a 300-horsepower 3.0-liter inline-6 turbo with 300 lb-ft. of torque and a rear drive 8-speed automatic transmission. A 240-horsepower turbo-4 is also available.

Now as for big brother 640i, despite sharing the Gran Coupe designation, it’s actually a traditional 4-door sedan with a proper trunk. 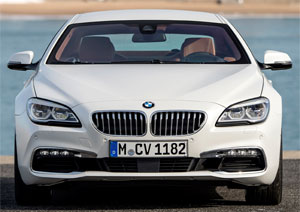 And regardless of having 40 in the nomenclature instead of 35, it shares the same 3.0-liter engine, though the turbo works a little harder here for 315-horsepower. A bigger 445-horsepower V8 is also available; and, as in the 4-series, all-wheel-drive with either engine.

So, now that we’ve fully complicated everything as much as possible, we’ll say that this recently refreshed 640 is even better looking than the 435. And, to our surprise, BMW says Gran Coupes now make up ½ of all 6-series sales.

Once inside, though the overall theme is similar to the 4, its execution is both further upscale, and with more room, much more inviting. 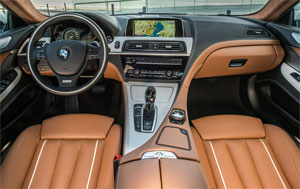 That advantage compounds throughout the ¼-mile, delivering almost a full second dividend at the end, as the 435i trips the lights in 12.9-seconds at 105 miles-per-hour; while the 640i finishes in 13.8-seconds at 102 miles-per-hour.

It also follows that the 4 is more nimble through the cones, with comments of extremely agile, quick, and direct coming from our test drivers.

While in the 6, both over and understeer were more present, and there is an overall feel of more weightiness. Still, the BMW solidity comes through loud and clear.

Not enough performance for you? Well, an M6 Gran Coupe is also available. But for one final puzzler, 4 Series M cars are, for now, limited to Coupe and Convertible.

So while we’re struggling to come to terms with what precisely a Gran Coupe is and why exactly we need one, the 2015 BMW 435i and 2016 BMW 640i are top-notch vehicles that can offer a little more practicality with a lot more style than sedan counterparts.  Making them a confounding conundrum we not only appreciate, but love to drive.