These days, flagship vehicles come in many shapes and sizes. It’s all very brand dependent. Now, for most German marques, the top dog is a big, luxurious, feature-packed sedan. Like BMW’s 7-series. This car is a showcase of what BMW is capable of, and it’s priced accordingly. It’s something for us, and rivals, to aspire to. So let’s find out if BMW’s latest luxury liner is worthy of its lofty perch.

The first thing we noticed about this 2016 BMW 750i xDrive is the sheer size of it, over 17-feet long. That’s about an inch longer than last gen’s long-wheelbase model, now almost exactly the same size as a Mercedes-Benz S-class, and, though L is no longer part of the name here, it’s the same size as the European long-wheelbase model. Confused? Well don’t be. Just remember it’s the biggest BMW sedan yet!

But, BMW engineers also did what they could to keep the 6th gen 7-series’ weight at bay; employing such measures as Carbon Fiber Reinforced Plastic for the passenger cell. But mass is mass, and here there’s 4,610-lbs of it; but that’s still over a 100-lbs less than last year. 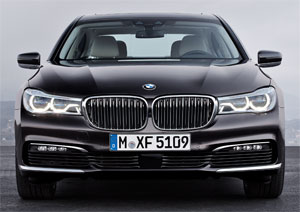 And the 4.4-liter twin-turbo V8 in our 750i xDrive had no problem dealing with it, even with all-wheel-drive. Horsepower is 445; torque, a more than healthy 480 lb-ft; all with an 8-speed automatic standard.

A snow-covered track kept us from getting 0-60 numbers, but BMW claims it takes just 4.3-seconds for the 750, and we don’t doubt it.

But pedal down, it’s mostly quiet behind the wheel. Still, when it does make sounds, they’re fabulous.

On the highway it feels dreamy too, neither plush nor firm, yet somehow fantastically soaking up whatever imperfections you stumble across like a super stable sponge. Visibility is great all around.

For the best experience, be sure to put it in Sport mode to get a little more feedback out of it; and a more dynamic character than any previous 7-series.

And while it may go against everything we and BMW both stand for, take some time to enjoy the back seat if you can. It’s super-roomy, with a pair of available screens and a control tablet to keep even the non-idle rich, and their kids, well pampered for miles. 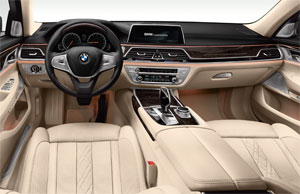 The optional Display Key, is like carrying an old flip phone in your pocket and probably does a whole lot more. It’s worth the price, for the wow factor alone. Just make sure you put it in the charging bin once in a while.

Up front, between the latest iDrive updates, the actual buttons, and even new gesture control, everything works extremely competently. This big car also has big storage too, with 18.2 cubic-ft. of cargo space behind the hands-free operated trunk lid.

Does the uninspired exterior design blend in too much? Yes. It is perhaps too conservative. But, that’s the market for top level sedans. The available M Sport package stands out a bit; with 20-inch wheels, aero kit, black trim, and sport exhaust system. Or, go the factory-backed tuner route with the now 600 horsepower Alpina B7.

While another optional system, Driver Assistance Plus, gives the 750 borderline autonomous driving. It works impressively well, picking up nearby cars quickly, keeping you in your lane. And in emergency situations, the automatic braking worked great every time; if very abruptly, waiting until the absolute last second to fully brake.

Obviously, when you’re talking 6-figures, it’s hard to call any car a bargain. But, this car has a lot of pure performance to go along with its tech-heavy, primo-luxury cachet. And, much more than most of its competition.

So, while at first sight the 2016 BMW 750i xDrive may not spike your excitement meter as much as some lesser Bavarian Motor’s models, spending time with it, reveals a car that is so good, so sophisticated, and so functional, that it makes total sense, yet confounds at the same time; making this flag bearer one of the most genuinely desirable cars we’ve ever driven.