When BMW launched the 1 Series coupe, it was a high performance hit. Then, they went and renamed it the 2 Series. And ever since, a more potent projectile has been longed for by the BMW faithful. The M235 was great, but still people wanted more, a full-on M version. And now BMW has finally delivered!

So, now that we have a first ever 2016 BMW M2; what exactly does that mean to a sport coupe buying public? And should you want one of these instead of an M4?

Well, in order to sort that out, let’s get started where all memorable vehicles start, the engine. No surprise here, as it’s of the familiar 3.0-liter straight-6 variety of course, with turbo-aided output of 365-horsepower and 343 lb-ft. of torque. Same basic engine as found in the M235i, just more boost and some beefed up components to handle it.

Those numbers may fall short of what many were hoping for in a true “M”, but surely BMW has to give people a reason to buy the M4 with its 425-horsepower, and of course it’s all about balance.

Weight here in the “deuce” is 3,450-lbs. with the standard 6-speed manual transmission. That’s 80-lbs. less than an M4. But even without extensive use of carbon-fiber here, the M2 remains super solid-feeling for such a small car. 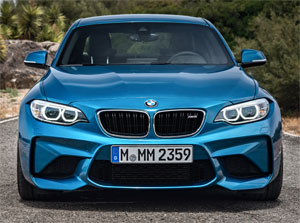 The manual gear change features active rev-matching; while the optional self-shifter is BMW’s 7-speed M DCT. With either, you get an active M Differential.

Selecting the gears yourself is not the fastest option according to BMW, but it’s the preferred one as far as we’re concerned. We’re clearly part of the “Save the Manuals” brigade. And, we were quite satisfied with a 4.2–second 0-60 time.

Power is not overwhelming, but you still move along in a hurry, clearing the ¼-mile in 12.8-seconds at 110 miles-per-hour.

Perhaps the best news of all about this M2, at least for traditionally-minded enthusiasts, is there’s no electronically controlled suspension. BMW engineers decided just to design this one properly from the get-go.

Through the corners of Summit Point Motorsports Park’s tight Shenandoah Circuit, it felt supremely nailed down with all kinds of traction for getting through sharp corners; and for holding its own through sweepers.

Pushing harder to find its limits, oversteer does present itself; but remember, here, it’s your friend. There is M Dynamic Mode stability control and even in Sport-plus mode the nannies will step in if you get too out of shape.

Brakes are full-on M-spec., 4-piston calipers with 15-inch discs up front and 2-piston clampers with 14.5-inch dishes in the rear. They worked phenomenally.

With such fine hardware, the M2 never felt out of control or gnarly; just very competent, well-balanced, and most importantly, epically fun! Ride quality away from the track is not even that harsh; though, that’s relative of course, we are still talking about a track-worthy sport coupe.

So ultimately, we say skip the M4. If you’re looking for what an M3 used to feel like; this is it.

We’ll even go so far as to say it looks better as well. There’s an aggressively scooped new nose, naturally; and the fenders have been widened significantly to house the standard 19–inch wheels.

There’s exactly 106.0-inches between the center of those wheels; and with its long hood and hacked-off rear, proportions of this micro-marauder look just right. The quartet of exhaust tips highlight a mostly flat hind end, with a very mild-mannered deck lid spoiler. 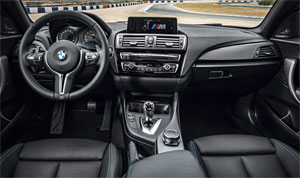 The M2 packages all of that performance and macho bodywork, with a well done interior that is sporty without sacrificing all the amenities that BMW followers require these days; coming very well equipped.

An optional Executive Package goes further with heated steering wheel and rear view camera. Unlike big brother M4, that’s about the only thing you can add; other than the DCT transmission.

Government Fuel Economy Ratings are 18-City, 26-Highway, and 21-Combined. We averaged 22.1 miles-per-gallon of Premium. So there’s an average Energy Impact Score of 15.7-barrels of yearly oil use with CO2 emissions of 7.1-tons.

So, while we won’t go so far as to say it was just what was needed; because truth be told, the M235i is a pretty fine machine. But this 2016 BMW M2 sure is a highly desirable mini beast of a car. Don’t look at it as a scaled down M4, rather a proper M3 that we all remember. So, welcome back BMW; we sure did miss you. And, thanks for bringing back that lovin’ “M” feeling.