The BMW X1 was a true, early entry into the subcompact luxury crossover segment. But as is often the case, those that quickly follow are able to use your blueprint and improve upon it.  Thus a new X1 has now been unleashed on the entry-level luxury loving streets of upscale suburbia.  But there’s more new here than meets the eye.

The 2016 BMW X1 may not look all that unique from its predecessor; but it is indeed vastly different, riding on all-new architecture, and a front-wheel-drive based one at that.

Surely blasphemy to the BMW faithful. It’s all about baby steps, folks. BMW has already gotten you addicted to their SUVs, and now they slip in the front-drive architecture.

It doesn’t take a genius to figure out the reasons for that change; to drive costs down thanks to platform sharing with MINI, while bringing interior space up.

And there is indeed more room, especially in the back seat; but don’t expect midsize space here, it still feels smallish.

There’s also a bit more cargo space, climbing from 25.0 to 27.1 cubic-ft.; accessed by a standard power lift gate. Hands free operation is an option making the X1 a much more practical vehicle. 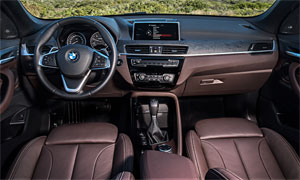 And we do like our practicality, as does BMW; giving us functionality plusses like the 40/20/40 split-folding rear seats that slide and recline; as well as fold almost fully flat to expand the space to 58.7 cubic-ft.

All of the additional space wasn’t really a necessity, but it is much appreciated, making the X1 one of the roomiest in its class; now just about the perfect size for families either starting out or nearing the empty nester phase.

Still, the X1 retains that intimate feel that we love in a BMW, being surrounded by a luxury-clad, competently sporty vehicle. And not only are all materials inside improved, but everything seems more upscale in operation.

Well, everything except the front seats, that is. They are small, narrow, and uncomfortable almost to the point of being a deal breaker. And you definitely want to think twice about seats this light in color if kids are in your foreseeable future.

The X1 is initially available only in a single xDrive28i model. So despite a front-drive type chassis, it comes standard with all-wheel drive. As does an 8-speed automatic transmission and 18-inch wheels. Plenty of add-ons like head-up display and advanced safety features are available. 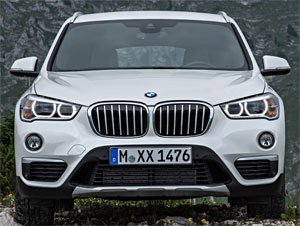 We tried to make it sweat, but it responded by continuously delivering smooth and buzz-free trips to 60 in 6.3-seconds. It’s quite torquey off the line, with some front wheel spin before the rears kick in to compensate.

Gear changes were quick and firm, accompanied by a nice exhaust rasp throughout the 14.8-second ¼-mile run, which we completed at 94 miles-per-hour.

Even with the shift to a front-drive chassis, handling remains very rear-drive BMW-like. That’s not a big surprise, since this platform already deals out plenty of fun in the MINI Cooper. And, with all-wheel drive standard, it’s almost a guarantee that most buyers will not be able to tell the switch in chassis design.

Though we certainly could sense some additional understeer; body roll was kept well in check.

111–foot average stops from 60 is certainly not bad either, but braking performance was not quite up to the par we had in mind. Stops were inconsistent and the pedal felt soft with a fair amount of travel.

The X1 does appear more SUVish than before, and much better looking overall. But like most of the European crossover entries in this segment, still a little too “wagony” for our tastes. 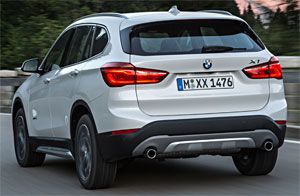 Most every dimension has increased, except for length; minus-1 overall, while the wheelbase shrinks by 3½-inches to 105.1.

Government Fuel Economy Ratings are 22-City, 32-Highway, and 26-Combined. Our average was just 24.8 miles-per-gallon of Premium. Still, that makes for a better than average Energy Impact Score of 12.7-barrels of annual oil use with 5.7-tons of CO2 emissions.

X1 base pricing is a reasonable $35,795; but you can easily tack on another 10-grand in optional packages.

Oddly enough, going against just about everything BMW stands for, has made the 2016 BMW X1 one of our favorite BMWs; especially if you look at is as a sporty 5-door, not as an entry-level crossover.

It may not be the most capable or comfortable mini-ute on the market, but as you can expect, it’s one of the most fun. BMW has addressed anything we didn’t like before, as well as taken almost everything that we did like about the previous gen X1 and made it better. And most importantly, given us more of it.