While BMW has made a few diesels available here stateside, they’ve mostly resisted that impulse. Instead, they’re looking further down the road with hybrids and plug-ins. And now that they’ve brought that strategy to the popular X5 utility, it’s time for us to plug-in and check out its advanced functionality.

BMW, like many brands, has been a bit schizophrenic lately, especially when it comes to their EfficientDynamics fuel saving strategies; shot gunning the field with both diesel and hybrid technologies. But this 2016 BMW X5 xDrive40e is their first plug-in hybrid SUV.

There’s nothing really exotic about the hardware, just all the hybrid basics including a 9.2-kWh lithium-ion battery, onboard charger, and regenerative braking; along with standard all-wheel-drive, and an 8-speed automatic transmission. 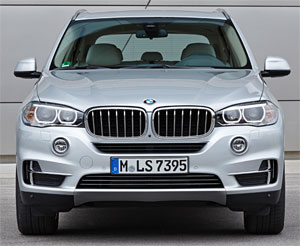 Of course they are all tied to a gasoline-fed engine, in this case BMW’s TwinPower turbo 2.0-liter I4; outputting 240-horsepower and 260 lb-ft. of torque on its own. Add in electric boost, and system total is 308-horsepower.

Pure EV range is 14-miles; and while that’s certainly not much, every little bit helps. And even after the gas engine kicks on, the vehicle still operates as a true hybrid with an overall range of 540-miles.

We appreciate the xDrive40e’s low key nature, though some will surely wish to broadcast their “ecodentials” a little more prominently. No one would call it gorgeous, but the proportions are good, and it’s not a bad looking SUV at all.

It undoubtedly has a unique feel behind the wheel. The powertrain itself, impressed us with its silkiness and noticeable added oomph; but the regen braking is not the smoothest, and there’s an overall weird feel to it that’s hard to describe.

That’s not helped by the electric power steering that has virtually no feel. And while we know that no EPS has the self-centering feel of a hydraulic system, this one behaves particularly poorly; up to the point of being twitchy at highway speeds.

Even with dark colors, the interior is bright and airy. It is also less complicated than it could be, and certainly more luxurious than it probably needs to be, yet not quite on par with Audi. 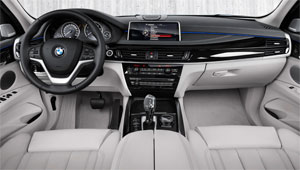 Considering all of the touch-panel systems we have to deal with now, we’re actually fond of iDrive these days, but the same can’t be said for the overly complicated e-shifter.

Some of our crew also had a hard time finding a comfortable front seat driving position. Though rear seats were both roomier and more comfortable than the typical Euro-ute setup.

Of course Government Fuel Economy Ratings are very important, and the xDrive40e earns a Combined MPGe rating of 56. Our loop average; 32.0 miles-per-gallon of Premium; obviously the shorter your trips and the more time you spend without the gas engine running, the better you’ll do.

So the Energy Impact Score is great for an SUV, burning 9.2-barrels of oil yearly with CO2 emissions of just 4.1- tons. By comparison, the still available X5 Diesel rates 26-Combined.

At our test track, the xDrive40e leapt off the line with zero wheel spin. The engine revs quickly, with a noticeable added punch from the electric motors. We hit 60 in 6.5-seconds. That’s a solid 7 tenths faster than the last 6-cylinder X5 we tested. We loved the true 8-speed automatic too, as gears clicked through quickly on our way to a 14.8-second ¼-mile at 95 miles-per-hour. 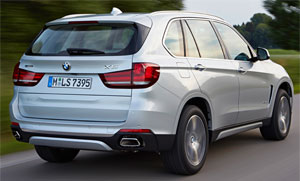 The bothersome steering was even more noticeable than ever through the cones and we were unable to defeat stability control. So the traction police were shutting down the party before the invites were even mailed. Not quite the BMW experience we hoped for.

Being a German luxury SUV, some sticker shock is expected, but here it’s of a different sort. It’s not that $63,095 is that inexpensive, but we were expecting an even higher price tag. The last 3-series sedan we drove went for over 59 grand. So, it’s been a while since we’ve driven a big BMW this reasonably priced. Both the xDrive35d diesel and 6-cylinder gas xDrive35i are cheaper still, but the hybrid is still way less than the V8.

Depending on your driving style and perception of plug-ins and hybrids in general, will signify whether the 2016 BMW xDrive40e is for you or not. If long distance touring is your thing and you look at hybrids as merely stopgap measures on the way to true EV motoring, you might be better off with a diesel. But, if you want the latest in drivetrain technology, and more often take shorter trips, than a PHEV like this may be for you. Bottom line, BMW gives you the choice. Still, we think more and more people will soon be plugging in; and for many, this plug-in X5 will be a great way to start.