Buick is one domestic brand that Americans may a hard time figuring out. Maybe it’s because they enjoy higher sales in Asia than here. Or because the “roadmaster” sedan marque is best known today for its luxury SUVs. But one new Buick that needs little decoding for the home team is the Cascada. That’s waterfall in Spanish, it’s a drop top beauty designed for luxury fun in the sun motoring.

This 2016 Buick Cascada does indeed look ready and willing to deliver some high style motoring fun in the traditional European grand touring vibe. That makes sense as it’s a slightly Buick-ized version of the Opel Cascada that’s assembled in Poland and available on that continent since 2013.

As other recent Buicks also share a lot with Opel, many things will be familiar to those already in the Buick fold.

It’s smooth from all angles, with wraparound headlights, but less grill-work than other current Buicks. It looks like only the logo changes from Opel to Buick. Wing-shaped LED DRLs and steeply raked A-pillars add signature flair.

With a chassis derived from the compact Verano sedan, the Cascada has a tidy 184.9-inch overall length. The rear is equally smooth and curvy with a subtle deck lid spoiler, and large 1-piece tail lights. And since those taillights lift with the trunk lid, there’s a 2nd set inside for flashing in emergency situations. 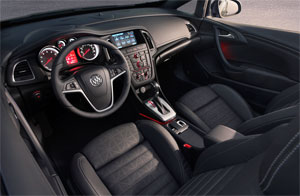 And with that trunk lid open, you’ll also find a great 13.4 cubic-ft of storage space. Even when the top is stowed in the well-designed holding area, 9.8 cubic-ft. remains. You also get folding seat backs for even more utility.

The passenger space is a mixed bag. On one hand there’s lots of hard plastic. On the other, there are features like automatic seat belt presenters found on much pricier droptops.

The overall appearance is classy; with good room up front, yet only so-so seat comfort. Access to the rear seat is also quite good, but room is tight for adults.

We really like the shape of the dash and the gauges are sharp. But another Opel carryover are lots of similar shaped buttons on the center stack and console that may lead to control confusion until you get more acquainted.

Cascada has little direct 4-seat drop-top competition here. The Beetle and Mini Cooper convertibles are way too small, where Mustang and Camaro convertibles have too much muscle carry. The Volkswagen Eos is perhaps its closest rival. We think those desiring an Audi, BMW, or Mercedes droptop will look past Cascada. 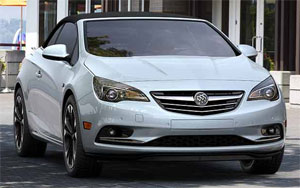 Cascada power is GM’s Ecotec 1.6-liter I4 turbo. It provided an adequate amount of motivation around town with 200-horsepower and 221 lb-ft. of torque. A 6-speed auto is standard.

Soft top operation is one of the best designs we’ve ever seen; with quiet, smooth, and quick operation by a single switch.

We found ride-and-handling characteristics very dependent on whether that top was up or down, and the state of the road surface. Top-down on smooth roads; it’s all great. Drive more aggressively, and despite a Euro-stiff ride, it can start to feel a little flabby.

Putting the top up seems to bolster solidity, and even pushed hard at our test track we were fairly impressed with its speedy response, minimal weight transfer, and overall firm, neutral feel.

Acceleration tests are not its forte. The engine works hard but still rates gutless, taking 8.9-seconds to reach 60, and 16.9 to clear the ¼ at 88 miles-per-hour.

Countering is a quite respectable braking average of 124-feet from 60. A very firm pedal was also a pleasant surprise.

Government Fuel Economy Ratings are 20-City, 27-Highway, and 23-Combined; so our average of 26.3 miles-per-gallon of Regular was also better than expected. The Energy Impact Score rates average using 14.3-barrels of oil yearly, accompanied by 6.5-tons of CO2 emissions.

Convertibles are not very popular in Asia. So, GM wisely tailored Cascada mostly for European and American consumption. And, we definitely think it will help Buick’s brand image here, even if more drivers are likely to “test” a Cascada in Florida rental fleets than at dealers.

We like Cascada. It’s not perfect by any stretch, but with domestic brand premium 4-seat convertibles in extremely short supply as of late, we think this “waterfall” delivers a refreshing turn at the wheel.