The 2016 Cadillac CT6 is indeed an all-new flagship sedan that doesn’t replace anything currently in the lineup, but rather looks to extend the range while raising the profile of the entire Cadillac brand.

Slightly longer than an XTS, both the CT6’s overall length and 122.4-inch wheelbase are just shy of benchmark large luxury liners Mercedes-Benz S-class and BMW 7-series; but it’s much bigger than four-doors like the Acura RLX that straddle the midsize/fullsize line.

This car is clearly full-size and it is also beautiful; sleek and sophisticated, far more gorgeous going down the street than it ever looked on an auto show stand.

Yet it still appears very American, and there are plenty of traditional Caddy cues.  Proportions are just right.

Standard 2.0-liter turbo 4-cylinder power might be a stretch for a large global sedan, but its 265-horsepower is certainly adequate.  And most Cadillac owners never know what’s under the hood anyway.

8-speed automatic transmissions for all.
More significant is the return of a rear-wheel-drive architecture. Of course, all-wheel-drive is available as well.

And consider our minds blown when we checked the rearview mirror only to see it’s actually a wide video display from the rear mounted camera.  It takes a little getting used to as you lose your normal frame of reference, but you can always switch back to a normal mirror.

Applying lessons learned with the ATS, lots of aluminum is involved in keeping weight down, more mid-size than full at just over 4,000–lbs. with the turbo-6; and you certainly feel it.

Highway ride is quite plush, yet nowhere near bloated; and it doesn’t go to pieces when pushed hard through corners.

It’s actually impressively solid, stays almost flat thanks to magnetic ride control, and has a joyous bit of oversteer at the limit.

Steering is very direct with a performance sedan feel and excellent feedback.

Things actually do get sporty in sport mode, and the car seems to shrink as you push harder; yet it remains incredibly smooth.

Off the line it certainly feels like 400-horsepower, with a quick leap to 60 in 5.4-seconds.  With all-wheel-drive, there was gobs of traction and plenty of bold power laid down.

The engine revs quickly, and automatic shifts come on just as fast; but the car remains super stable at speed, hitting 105 at the end of the ¼, after 13.7-seconds. 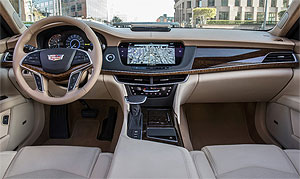 The interior is a huge step up for the brand, nicer than the XTS, and even more inviting than the XT5 crossover that we’ve also recently spent a lot of time in.  Most materials like wood and chrome are excellent. The leather-work, not so much. And, there are still a lot of different materials and surfaces going on in here.

Most of us aren’t fans of having strictly touch controls, though things have come a long way since the original CUE interface; we could live with this setup.

CT6 front seat comfort is truly spectacular; and, with almost a foot more wheelbase than the XTS, rear seat room very plentiful, as is trunk space.

Every safety system you could expect is available including night vision and automatic braking, which waits until the absolute last possible second before aggressively taking over and bringing you to a safe stop.

Government Fuel Economy Ratings are 18-City, 26-Highway, and 21-Combined.  We averaged a good 22.8 miles-per-gallon of Premium.

For an average Energy Impact Score of 15.7-barrels of oil consumed and 7.0- tons of CO2 emitted yearly,

Style and sophistication come with hefty price tags, but Cadillac does seem to have a CT6 for everyone from a base CT6 at $54,490 to Platinum trim with twin-turbo V6 at $88,460

So does the 2016 Cadillac CT6 really have what it takes to compete with the world’s best luxury sedans?  Well, it’s close with only a few details that need addressing. Still we think the CT6 easily exceeds its traditional buyers’ expectations, while giving new converts won over with the CTS and ATS a car to aspire to. It is a bold move up in style, stance, and interior features; and worthy of its flagship banner.  It’s also clearly the best ever from Cadillac, and an effort we gladly praise.