No matter where your car company hails from, if you build a sport sedan, you’ll ultimately get compared to the companies that have done it the best, for the longest time: The Germans! BMW, Mercedes, and VW/Audi. Whether that’s fair or not, is a topic for another day. Because right now, we’ve got a home grown contender to put through its paces, the Cadillac CTS-V!

American carmakers have been trying to catch up, and one-up the German sport sedan concept for over half a century. Numerous times critics, including us, thought they got close. But, it took the 21st century Cadillac brand to really close the gap, with the 2016 CTS-V aiming to fill it for good.

The CTS-V is the original V “for Velocity” of course, but just about everything that makes it go fast now, comes from the Chevrolet Corvette; making this essentially a four-door Corvette with a nicer interior.

That kinship start naturally enough under the hood with the Z06’s glorious 6.2-liter chunk of supercharged aluminum with pushrods, producing 640-horsepower and 630 lb-ft. of torque. The M5 and E63 AMG don’t even come close.

This thing is clearly not some mild-mannered pretender. Just hearing it rumble at startup will put fear into you; floor it and its “oh my gosh” awesome power! 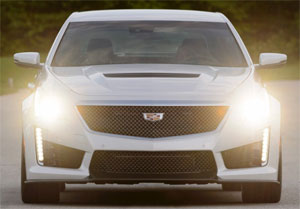 It is still built on the ATS platform, but significant structural bracing had to take place; and like some of us around here, has stiffer joints all around. Oh yeah, it’s race car rigid.

Just as in some front-wheel-drive transaxles that feature unequal half-shafts to prevent torque steer; a similar arrangement in the CTS-V’s rear, works to quell axle hopping on hard acceleration. The results are, according to the factory, a blistering 3.7-seconds to 60.

There are Brembo brakes obviously; and topping it off, GM stuffed as much rubber into the wheel wells as possible; 265/35/19 Michelin Pilot Super Sports in front, 295/30/19s in back.

We’ve said it many times before about V-Series cars; you really need to get them on a race track for full affect. Tooling to the winery on the weekend or even slicing up your local back roads in this CTS-V does not reveal the true story of how competent it is.

So we jumped at the change to try it out a Road America! Yep, this Caddy is one awesome track machine. Between Performance Traction Management and the power distributing electronic limited-slip differential, you have no trouble getting all 640 horses to the pavement with little concern about being out of control.

More power than the Germans, and better use of it than hotrods like Hellcats and Shelby’s. And that very linear power delivery also works well with the 8-speed automatic transmission that comes with all CTS-Vs.

There’s plenty of mid-range muscle coming out of turns; with minimal weight transfer thanks to Magnetic Ride Control, even with a hefty 4,145-lbs. to manage. Brakes are all day long durable.

Driven hard it seems to move around on you a little, but it seems to catch itself and never get out of shape. You know there’s electronic intervention happening, but you still feel in total control.

There’s a more aggressive look to go along with all of that performance. Virtually every body panel is unique and purposefully designed to maximize downforce, minimize lift, or enhance cooling.

The air-extracting hood is made of carbon fiber as are the front splitter, rear diffuser, and spoiler if you opt for the carbon fiber package. 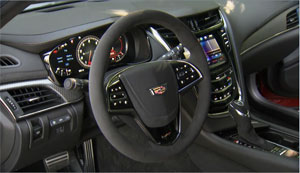 As for the interior, thankfully it does not appear like it was done on a shoestring budget; just an enhanced performance feel thanks to sueded materials, performance seats, Head Up display, and of course the Corvettes’ Performance Data Recorder.

And perhaps most important of all, it doesn’t feel any less Cadillac when you’re driving sanely.

Government Fuel Economy Ratings are 14-City, 21-Highway, and 17-Combined. So there is a gas guzzler tax.

Now, we know that many sport sedan aficionados will never be convinced that a four-door designed anywhere but Germany is worth a second look. But, if you have an open mind, then you’ll see where we’re coming from when we say that hands down, the 2016 Cadillac CTS-V beats all comers in the traditional European sport sedan category in every way! And we’re just ecstatic to be along for the ride.