We’ve known there was a major re-engineering coming to the Camaro for a while now, as its Australian-designed chassis had a firm expiration date. And indeed this 6th generation 2016 Chevrolet Camaro is actually 100% all-new. We don’t get to say that often.

Now riding on a slightly longer Cadillac ATS Alpha chassis, it is lighter, more powerful, and batter balanced, which as we all know is the ultimate sporty car recipe. And, borrowing a page from the latest Mustang, traditional V6 and V8 power have been joined by a new turbo 4-cylinder; which enables the base Camaro to weigh almost 400-lbs. less than the previous standard V6.

And, the I4 turbo is no slouch. A 2.0-liter, it’s also from the Cadillac camp, with 275-horsepower and 295 lb-ft. of torque.The available V6 is still an overhead cammer displacing 3.6-liters.

But technically, it’s a new six with a tiny bit more displacement, cylinder deactivation, and of course higher output, 335-horsepower and 284 lb-ft. of torque. The Corvette’s LT1 performs the SS’ V8 duties; here rated at 455-horsepower, yes that’s 20-more than the Mustang 5-0, and 455 lb-ft. of torque.

Best of all, the potent powerplant trio comes with your choice of 6-speed manual or 8-speed automatic transmissions. 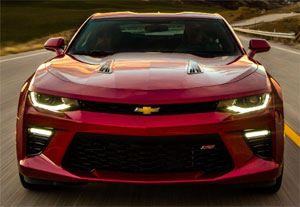 We spent our early drive times in a V6 RS, on a pedal-to-the-metal long haul from Philadelphia, Pennsylvania down to Raleigh, North Carolina. So we didn’t get a chance to verify GM’s claim of a 0-60 of 4.0-seconds in the V8 automatic SS, but we’ll have one at our track soon. And yes, we’re very much looking forward to pushing that estimate to its limits.

Up front, the upper grille slims down, while the lower air intake expands. And of course the RS adds its own unique touches, both cosmetic and functional, to set it above the base LTs.

Things inside are much more driver focused than before, there’s a new flat bottom steering wheel, and material quality has certainly improved. The design is thankfully more modern, and details like the temperature control rings on the vents are a smart touch. Still, many controls and some readouts are quite small. 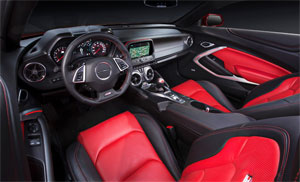 So, even though it trails Mustang a bit functionally, it still looks really cool. There’s an expected center dash touchscreen; it’s a big 8-inch display on which Apple CarPlay is available, which works well.

Also on par is an optional highly configurable high-def display for the gauges. A Convenience and Lighting Package adds Head-Up Display, aluminum accents, and additional interior lighting; as well as a host of active safety features.

Drive modes on all Camaros include Snow/Ice, Tour, and Sport, while the SS gets an additional Track mode.  Adjustments effect just about every performance aspect of the car, as well as sound management, and even ambient lighting.

On our road trip, it was easy to detect and appreciate this “Camaro by Cadillac’s” smaller size, lower weight, and more polished nature. All that plus the ATS’s MacPherson strut with double lower ball joints front, and 5-link rear suspension, with Camaro-specific tuning, makes a quantum leap in rough road ride and handling manners.

Magnetic Ride Control goes further but is only available in the SS, while Brembo brakes can be fitted to all. It’s a tad quieter at speed, but there’s still plenty of throaty engine rumble sneaking into the cabin. And that’s just fine by us, as are the speedier steering reactions.The manual shifter is much tighter than before; clutch feel is firm, but not stiff.

One final note of interest to many, Camaro production has returned to the good old U.S. of A., in Michigan where it belongs; assembled in GM’s Lansing Grand River plant.

Without a doubt, the 2016 Chevrolet Camaro is a leaner, meaner, and more sophisticated machine. And, from our initial drive, clearly steps up further on the world performance car stage. With sales just starting, it no doubt will give back this year’s pony-car war sales crown to Mustang. But, now with both Camaro and Mustang fully up-to-snuff, the fun is going to be in seeing if it’s a short term swap.