The 2016 Chevrolet Volt may be all-new, but its mission is still the same. Get as many Americans as possible to embrace the plug-in lifestyle by making it as easy and stress free as possible, by including a gas engine and generator to eliminate all aspects of range anxiety.

And to that point, chief among its newness is additional range; both in EV, now 53-miles according to the government; and in total, with 420-miles now possible before a fill-up.

Making this happen is a new dual-motor drive unit that is 12% more efficient than before. There’s more lithium-ion battery onboard as well, now 18.4kWh’s worth, though it weighs 20-lbs. less.

Electric motor output stays the same at 111-kW, but the engine, or range extender in plug-in parlance, grows to 1.5-liters. Horsepower jumps 17 to 101.

And more importantly, Government Fuel Economy Ratings are up significantly; now 42-Combined, with an MPGe rating of 106. Also saving you a few dollars, Premium fuel is no longer required. So the Energy Impact Score of just 2.0-barrels of oil used yearly with CO2 emissions of 0.8 tons is close to nirvana. 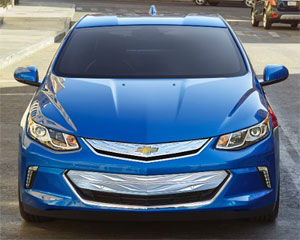 Perhaps more vital to some, is a new exterior design that looks a lot less sci-fi, and more down to earth. Though it’s still very modern, sporty, if a little Prius-like.

A highly aerodynamic shape remains of course, but no more than many other mainstream offerings. Every exterior dimension is up slightly except for height. Bottom line, this Volt will do a lot more blending in than broadcasting your eco-minded credentials.

Signature touches like the flashy split grilles get a major rethink. Low energy LED headlights are standard; as are 17-inch wheels, keyless ignition, and remote start.

Retaining its hatchback design means it’s still a very practical vehicle as well, perhaps more so now that you can get a 3rd passenger in the rear seat, if they are very small in girth that is! There is a good amount of rear leg room, but head room is still tight for adults.

The cargo area remains unchanged at 10.6 cubic-ft. seats up, but the portable charge cord is more compact and there’s a better system for storing it. Standard split folding rear seats expand the space for longer items.

More mainstream also describes the changes up front. The seats have improved comfort, and controls are more traditional with admittedly less wow factor than before. 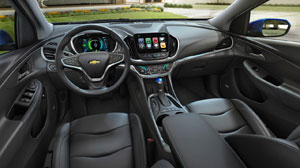 And while it may not be as futuristic, it still has a high tech feel with an 8-inch reconfigurable LCD screen behind the steering wheel for instrumentation, and one on the center stack for infotainment.

Normal, Sport, Mountain, and Hold drive modes are here again, but the Cadillac ELR’s Regen-On-Demand brake steering wheel paddles are a new addition. A back-up cam is standard; and to mesh with our connected lives, there’s increased phone integration through Apple CarPlay.

Regardless of trim, all seat controls are manual, as no power seats are available.

Still riding on the Cruze chassis means ride quality is good, but not exceptional. And it feels small and fairly competent in the corners, provided you don’t ask too much of it. Steering is direct with a nice weight to it.

We were impressed with the good sensation of power coming off the line, but perhaps even more so in passing situations. GM claims an 8.4-second 0-60, but our seat of the pants feel puts it even quicker than that.

A revised braking system eliminates some of the regenerative feel, and with good success; though the harder you work them, the more it comes to the foreground.

Much like in the ELR, the regen-on-demand paddles are very aggressive, plus they are fun to play with and can be very helpful.

The cabin has gotten quieter, especially when the gasoline engine is humming away; though you will still hear some tire noise on coarser pavement.

Base Volt pricing is actually down a grand over last year, with an LT now going for $33,995. The new more luxurious Premier trim comes in at $38,345. Even with tax incentives, it is still an expensive compact car, with current low gas prices pushing payback beyond the horizon.

Still, the original Chevrolet Volt was a landmark vehicle in our transition from fossil fuel power to electric propulsion. So with that ground already broken, the 2016 version is not so much an automotive revolution, as it is a significant improvement on a highly practical idea.