The current generation Dodge Viper may well be the friendliest Viper to date. But like most friends, there’s also has a dark side. It’s called the Viper ACR. That stands for American club racer, and it is just what it sounds like! A car you buy from FCA that’s ready to go club racing. So let’s do a little racing around on our own.

Okay, so we’re not really racing competitively here. But hot laps in this 2016 Dodge Viper ACR still got our blood pumping and adrenaline flowing just as much as fighting for any checkered flag.

Getting right to it, after uncoiling this snake and easing up to speed on the track; it doesn’t feel any gnarlier. And it takes some doing to find its limits, at which point you’d better be within yours.

There are still 5-levels of stability control if you need them, and as before in full-off mode you’re still on your own; all other modes have been recalibrated to account for all of the additional grip this car delivers. 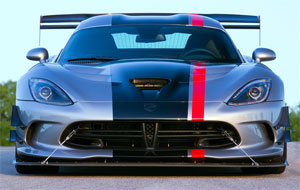 And the grip is immense, mostly thanks to the massive downforce being created by the aero package. FCA claims it’s nearly 1-tons worth.

Now Roebling Road is a 2-mile high speed track, with only one slow section for taxing quick transitions. So of course that additional downforce was more noticeable on the high speed parts, with all of the aero treatments seemingly planting the car into the asphalt more and more the faster you go.

The huge front splitter and the rear diffuser are much more than styling statements; and they’re also easily replaced if you grind them down past their effectiveness.

Removal also aids in loading the car onto a trailer, and let’s face it; it would look pretty darn cool to show up for track day and attach your front splitter, while everyone else is checking the air in their tires. Though your car probably won’t come with a full SRT crew like ours did.

There are also winglets on the front corners and strategically placed venting in the fenders for letting lifting air out.

New carbon ceramic matrix brakes proved beyond capable of slowing this thing down quickly at the end of the very long straight. 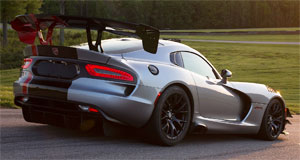 Standing starts on that same straight got us to 60 in 3.6–seconds. There’s still a manual trans only, and working both it and the stiff clutch as quickly as possible while modulating throttle, we were able to lay down an 11.7–second ¼-mile at 128 miles-per-hour.

If you’re a top speed seeker, stick with a regular Viper; as here it’s ONLY 177 miles-per-hour, due to all of the aero wind blockers creating all of that downforce.

No engine upgrades, you’ll have to make do with the “paltry” 645-horsepower and 600 lb-ft. of torque of the familiar Viper V10; rather, performance increases come from the aforementioned aero and braking up-fits.

As well as a totally revamped suspension with coil-over Bilsteins. It’s highly adjustable as well, for distributing weight; or you can just raise it by 3 inches for speed bumps or curb hopping.

All of the added aero treatments certainly add to the “race car on the street” looks, and general “badassery”. It truly looks like the real deal.

19-inch wheels are wide with borderline slicks for max traction, specially made for the ACR by Kumho. 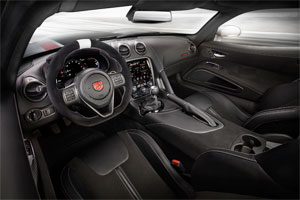 The interior is still thankfully sports car tight, and you’ll have to be happy with just 3 speakers for the stereo in the interest of weight savings. There’s also thinner carpet, and strictly manual seat adjustments.

Since those seats aren’t capable of keeping you in place with all of the Gs you’re pulling around the track, upgraded 5-point harnesses are in place.

Well-placed and purposeful Alcantara suede goes a long way in keeping things from looking or feeling too Spartan.

If you choose to drive this snake on the street, you’ll find it feels and sounds a lot more like the previous gen Viper, as some noise deadening materials have also been removed.

If you go full throttle and notice a temperature change, it’s the Viper turning the A/C off for you, in order to divert all possible power from the engine to the rear wheels, with little concern to your comfort. 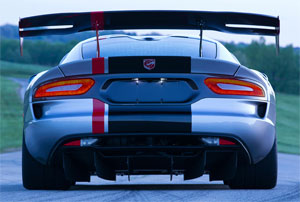 Government Fuel Economy Ratings are 12-City, 21-Highway, and 15-Combined; and somewhat less on the track.

Pricing starts at $123,490. Yes, that’s a bit more than a Corvette Z06, but the Z06’s dark side is not this dark; and that price is still well short of legitimate supercar competition. Plus options are virtually unlimited. Also remember that Viper production ends next year, so the limited run ACR will be a genuine collectible.

The phrase “race car for the street” gets thrown around more than salmon at Pike Place Market, but the 2016 Dodge Viper ACR is truly one gnarly track weapon of mass destruction that deserves the title and more.