If we told you that a Ford Focus was one of a few legendary vehicles that we’ve pined for over the years, you’d probably think we’re crazy. Unless of course you are familiar with the Focus RS. The “RS” is Ford Europe’s Rally Sport racing division that campaigns in rallycross and road rallies all over the world. So this Focus RS is sort of like what a Shelby Mustang was in the 60’s. Get the picture? Well, we’re about to make that crystal clear.

The 2016 Ford Focus RS is the first global RS performance vehicle; which means it’s also the first one we’ve gotten here in the States. And to some, the fact that it is the most powerful Focus ever, may be akin to saying it’s the best tasting lima beans they’ve ever eaten. But, not so fast. There’s plenty to get excited about here.

All-wheel-drive is a big part of the picture, so it obviously appeals to both rally racer wannabes as well as the “fast and furious” set; and there’s even a drift mode for the hooligans. 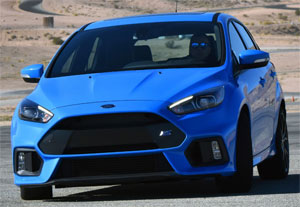 It’s not the typical Haldex system, but a unique design, with clutch packs on each rear ½-shaft; designed with handling and grip in mind, for putting the power down without understeering like mad. It can send as much as 100% of rear axle power to a single wheel. The front remains open, using selective braking to help pivot the car around corners. And the Focus RS still operates as a front driver most of the time.

There’s decent power to be had here as well. It’s from the Mustang’s 2.3-liter I4-turbo, only with a host of upgrades; the chief ones being a bigger turbo and intercooler. It cranks out 40-more horsepower than the Mustang at 350, as well as 30 additional lb-ft. of torque at 350.

Both the clutch and 6-speed manual transmission get beefed up internals as well.

So at the track, thanks to the RS’ all-wheel-drive, there’s no danger of the typical Focus one-wheel-peel here, as the RS “grips and gets” off the line in a hurry.

Launching is complicated somewhat by a hair-trigger clutch that engages with your foot barely off the floor, but we were able to hit 60 in 5.0-seconds flat.

The engine revs quickly, and there’s a deep exhaust bark; as the RS streaks down the ¼-mile in 13.6-seconds, finishing at 104 miles-per-hour.

Often when we’ve waited a long time for a car, it’s easy to be disappointed. Not the case here at Summit Point Motor Sports Park’s Shenandoah Circuit; it is what we thought it was. 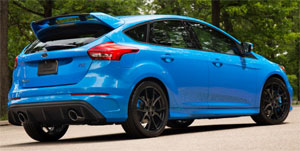 Just engage Sport or Track mode; which stiffens the shocks, adjusts all-wheel-drive, steering, and stability control configurations; as well as exhaust note and throttle response; and let the fun begin.

It’s a real hoot on the track, but also never feels out of control; so its limits are easily attainable for even novice hot shoes.

Converse logic is in play here. When you start to feel understeer, don’t back off; rather feed in throttle and the car sends more power to the rear, and through the corner you go. Vastly different in feel and performance than the Focus ST.

Like other RS track test, we experienced some rear diff. overheating which results in a temporary AWD shutdown, with the accompanying warnings in the gauges. But all returns back to normal after a restart.

And just so you’re aware, Drift mode won’t turn you into Vaughn Gittin Jr.; you still have to know what you’re doing. It just diverts even more power than usual to the rear to help you out. 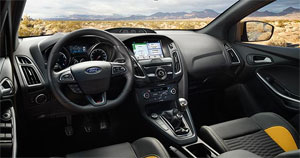 With virtually all cars these days taking on an aggressive nature, the Focus RS doesn’t look over the top at all, even with the necessary huge rear wing up top.

Both the front and rears are re-shaped to optimize aerodynamics, and even the underbody has been tweaked to eliminate high speed lift.

Inside, there are Recaro seats, special trim, and a shortened shifter; but all-in-all it’s the least thrilling aspect of the car.

Government Fuel Economy Ratings are 19-City, 25-Highway, and 22-Combined. We averaged 22.6 miles-per-gallon of premium. The Energy Impact Score is 15.0-barrels of yearly oil use with 6.8-tons of CO2 emissions.

Pricing, at $36,775, or less than the average minivan transacts for, is a relative performance car bargain.

As Mick Jagger says, you can’t always get what you want, but you just might find, you get what you need. Well, if you have a need for world class speed, but a down-to-earth budget; the 2016 Ford Focus RS offers a near-perfect mix of performance insanity and daily driver necessity. That makes it Really Special, and worth the wait.