While Carroll Shelby may no longer be with us, his high performance legacy will surely outlive us all. Hopefully going forward, cars that bear his name will serve that legacy well. And that leads us to the rebirth of a core of his legend, the Ford Mustang Shelby GT350. So let’s find out if it deserves to be called “Shelby”.

There have been loads of legendary Mustangs over the original pony car’s five decades; but none more so than those built strictly for dicing up a race track, like the Shelby GT350s. So, it goes without saying, the 2016 Ford Shelby GT350 and 350R Mustangs have mighty big wheel wells to fill.

Well after our own track time, we can say that the 19-inch wheels of both of these pumped up ponies sport the rubber to do it, amply aided by some serious beef under the hood as well.

526-horsepower of U.S.D.A. prime is what we’re dealing with here. Naturally aspirated, American made, overhead cam, V8 torque aplenty, at 429 lb-ft. With a flat-plane crankshaft it is the most powerful naturally aspirated engine ever from Ford, breathing leftovers out of a quartet of exhaust tips. 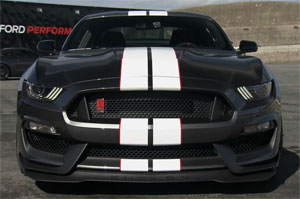 But that’s only the beginning of the Shelby magic. Front to rear, almost everything has been upgraded, from suspension, to aerodynamics, to cooling, to style, and even improving the interior to make these truly exceptional Mustangs.

You certainly know you’re sitting in something special. Nestle into the Recaros, grab the flat bottom steering wheel, and catch a glimpse of the gauges. And in case you forget, a dash plaque in 350Rs reminds you.

It all looks bad enough into strike fear in the hearts of lesser muscle cars everywhere. Everything in front of the windshield is new, with an aluminum hood, further flared fenders, and of course a lower stance.

As you would expect, R models go “next level” with even more aero and suspension tweaks as well as the removal of 120-lbs. of unnecessary weight. Much of that due to the addition of carbon fiber wheels.

But onto our track drive. It has to be extraordinary as well. And, on course around Mazda Raceway Laguna Seca, it indeed is all its “cranked” up to be.

Getting tuned in to the GT350 cautiously, we found no understeer to speak of and only minor peeps of overcoming from the rear. Brakes were everlasting. 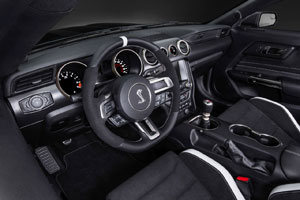 Already the stiffest Mustang chassis ever, further bracing has been added; and all suspension components connected to it recalibrated. In addition, MagneRide dampers are available for the first time.

Once up to speed, it was time for hopping into the GT350R to find its limits, or perhaps just ours. The same immunity to understeer is present, but here the rears are a little more willing to step out and aid you in turning, with very progressive and useful levels of oversteer.

If you thought the BOSS 302 was dialed in, this ‘stang is on speed dial.

As you would expect in a purpose-built track-ready car, there’s a manual trans only: a 6-speed Tremec TR-3160.

Ford makes no claims for 0-60 times, as they see it as more of a total performance car and not one built just for the dragstrip. But the standard line lock and Performance Shift Light Indicator suggest at least they had that in the back of their minds. We estimate 0 to 60 in less than 4.0-seconds.

And, there is a Drag…drive mode, accompanying Track, Sport, and Weather; with full chassis dynamics control. The engine never seems to run out of power around the track. It revs to 8,250 and sounds brutal and nasty.

Now if there’s any bad news, it’s that there is a Gas Guzzler tax with Government Fuel Economy Ratings of 14-City, 21-Highway, and 16-Combined.

Considering that handling capabilities are more on par with high-end German performance coupes than other pony car pretenders, base pricing of $49,995 seems downright reasonable. The R’s less for more approach will cost you $63,495.

So, it goes without saying, that the 2016 Ford Shelby GT350 and GT350R Mustangs are more than just big engine madness. They are absolutely complete, with major upgrades to address all areas of track ready performance. And yes, they are indeed Shelby’s in every sense of the icon. Ready to further a legend by making history of their own.