When GM announced diesel power was coming to their midsize Chevrolet Colorado and GMC Canyon pickups, it was at the height of diesel’s recent surge in popularity. Well shortly thereafter, Volkswagen was caught cheating during their emissions testing and light duty diesel sales in America all but came to an abrupt halt.  Well, as things are getting slowly sorted out, let’s find out more about GM’s latest Duramax diesel and if you really want one.

Only time will tell if the VW diesel scandal will dig a permanent ditch for diesel sales in America. But, chances are those interested in our 2016 GMC Canyon Duramax 4X4 have never even thought about owning a Volkswagen.

The Thailand-built 2.8-liter I4 Duramax turbo-diesel is not a new engine, as this Mini-Duramax has been used in other countries for years; and was even available here in Jeep’s Liberty for a brief time. But GMC’s version is an updated one, putting out 181-horsepower and a robust 369 lb-ft. of torque.

It’s largely a standalone option that for any SLE or SLT Crew Cab; though with it, comes a 6-speed automatic transmission, trailer brake controller, exhaust brake system, and a 3.42 rear axle. Our truck’s 4X4 system is two-speed on-demand. 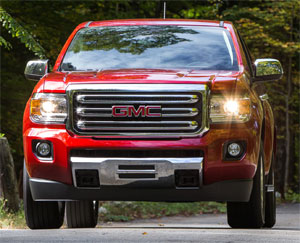 But those with visions of towing full-size stuff, will need to throttle back; as it has a max tow of 7,700-lbs. Only 700 more than a V6. Still it’s the most of any smaller truck.

Obviously there’s plenty of torque for pulling, and it feels quite good taking off with trailer in tow. Though once rolling at speed, nailing the gas reminds us that it is still a 4-cylinder.

At our test track, without a trailer in tow, the Duramax Canyon clattered to 60 in 9.8-seconds. All that torque produced minor wheels spin, and like most diesels, shifts come early and often as you head down the track.

Those gear changes are very smooth but time consuming; making the ¼-mile trip a long one at 17.5-seconds at 79 miles-per-hour.

Through the cones, the Canyon handles well, feeling rough and rigid truck solid; not flimsy like some earlier GM small trucks of the 80s and 90s. Still, slow steering, high gravity center, and tall sidewall tires make for a far from sporty trip. 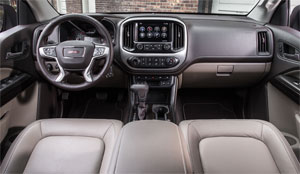 A braking average of just 115-feet from 60 is quite good; so we’re willing to accept the nose dive and long-travel pedal.

Nothing changes inside, so everything that we appreciated in Canyon/Colorado CrewCab before, like the wide cab, big switchgear, comfortable seating, great small item storage, WiFi access, and generous rear seat are still there. Making this midsize crew pick-up a true alternative to a crossover.

This 5-foot 2-inch short-bed is indeed short but it’s also very deep; though not so deep that you can’t reach in pull stuff out easily. A 6-foot-2 bed is also available.

Diesel 4X4 Government Fuel Economy Ratings are significantly better than the gasoline V6, at 20-City, 29-Highway, and 23-Combined. We slightly bettered that at 23.9 miles-per-gallon of Diesel. The 4X2 version rates 25 Combined, the best of any pickup.

But the Energy Impact Score is still below average for all vehicles at 16.6-barrels of oil used yearly; with 7.4 tons of CO2 emissions.

It’s too early to tell how well this Mini-Duramax will be widely accepted, but they’re somewhat hard to come by right now. The four grand extra to enter Torqueville for uplevel SLT trim may be a factor in eventual acceptance. Still, a premium price doesn’t seem to hurt full-size diesel trucks. The least expense Canyon MSRP you’re looking at is $36,520. Chevrolet Colorado pricing is slightly less.

While demand for a fuel-efficient, smaller truck is not peaking right now; for those looking for a mid-size truck to tow mid-size trailers, currently this is the best way to go. It’s capable, yes; but more importantly, it’s extremely comfortable and enjoyable to drive. And with diesel fuel prices way down in most markets, the 2016 GMC Canyon Duramax still makes good common sense.