Like the auto industry itself, it’s been quite a roller coaster of late for the Honda Civic. After its 2011 redesign was met with much disdain by professional car testers, it was hastily re-done just a year later. But, there was only so much they could do. It would take a full reengineering to return the Civic back to its accustomed pedestal. Well now it’s arrived, the 10th generation Honda Civic. So, let’s see if it still deserves its perch.

Redesigning the Honda Civic is surely a tightrope act that even the Flying Wallendas would think twice about. On one hand, people have extremely high expectations of what a Civic is and should be; and on the other hand people want to see lots of improvements that make upgrading worth it. And much like an extremely dangerous high wire act, getting it wrong would be a real disaster.

So, Honda’s goal for the 2016 Civic; like any stunt performer will tell you, is to do all of the prep work possible, leaving nothing to chance. For Honda, that means making it better in every possible way. 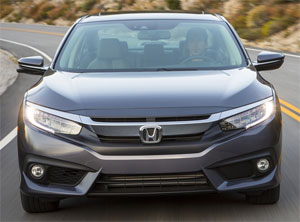 The tiny turbo is the more intriguing of the two, and the one we spent the most time with on our first drive opportunity just outside of New York City.

It’s a little bit laggy with power delivery, clearly feeling more entry level than sporty. But S mode tightens things up, though not so much that you can’t leave it in there all of the time, which we eventually did.

The CVT transmission attached to it does the best job yet of acting like a real automatic, unless you’re keeping it pinned for extended periods a la highway on ramps. And even then, it’s fairly quiet.

Coupe and first time 5-door hatchback body styles will be available, but sales will start off with the bread and butter 4-door sedan. 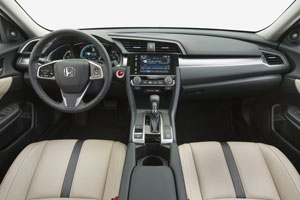 Wheelbase is 1.2-inches longer than before at 106.3; and overall length sees a gain of almost 3-inches. It also sits lower and wider.

Of course that adds to interior space which now feels more mid-size than compact. There is plenty of room up front; with more than expected hip, leg, and head room in back, even when equipped with a sunroof. Trunk space also sees a big boost to 15.1 cubic-ft.

Seat comfort is very good and the low seating position is reminiscent of 80’s Japanese cars. Small A-pillars and a big windshield provides the typical Honda great visibility, aided by big side mirrors and a standard backup camera.

The dash is very linear looking without much to break up the flow. Both fit-and-finish and material quality are impressive. Thankfully the two tiered gauge experiment has come to an end.

Despite our turbocharged car’s lag time at launch, we were off to a decent 0-60 time of 7.5 seconds. With both the little turbo cranked and CVT screaming, the ¼-mile passed in a respectable 15.7-seconds at 93 miles-per-hour.

Through the cones there is a noticeably firmer feel, and a lot less understeer than before. Throw on beefier tires with actual grip, and Honda might really have something here. The steering stiffens up as you go, but it’s a very artificial feel, not necessarily a helpful one.

Civic pricing is up slightly, but remains under 20G’s, with a base, well equipped LX Sedan starting at $19,475. Top Touring trim with the turbo and Honda Sensing accident avoidance package begins at $27,335.

Despite recent journalistic pans, the Civic has remained a compact car sales leader. Still, Honda took no chances this time around, and has updated everything possible in the 2016 Civic. Looks like the 10th time is a charm.