In giving the Honda Civic our MotorWeek driver’s choice best small car award for 2016, we acknowledged how well, and how rapidly, Honda corrected the shortcomings of the previous generation. While we were also influenced by the wide array of civic models that would follow, our seat time was solely in the first to be launched sedan. Well, now we’ve finally gotten drive time in the first non-four-door Civic born from this platform, and it’s quite a coupe.

Of course a Civic Coupe is nothing new; Honda says they’ve sold nearly 2-million of them so far. But this 2016 edition comes hot on the heels of the Civic being named the North American Car of the Year, as Honda adequately righted what most thought was wrong with the previous generation.

This 2-door features a sportier design compared to the Sedan as expected, including getting a full-width tail light treatment across the rear that grabs your attention and makes the Coupe easy to identify at night.

Aggressive, is a much overused descriptor when it comes to car design, but we’ll succumb to it here when describing the front end, though the lines soften the tones as they head rearward; accompanied by a sharply descending roof line.

Wheelbase is longer by over an inch compared to the sedan, yet overall length drops by more than 5-inches, all of that length coming off the back end. And despite a hatchback appearance, a traditional trunk remains, with the cargo space in it, up slightly over the previous gen. to 11.9 cubic-ft. 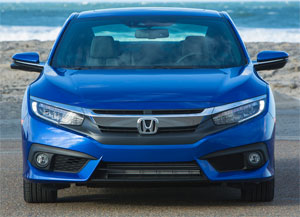 Rear seat passengers are the ones that ultimately pay the price for the Coupe coolness. Access is bearable, and seats are actually fairly comfortable, yet there’s just not enough headroom for most adults. If you plan on plenty of “party of 4” outings, you’d best better stick with the four-door.

With which the Coupe shares current engines choices. You can get the 2.0-liter naturally-aspirated I4, at 158-horsepower and 138 lb-ft. of torque, with a 6-speed manual transmission or CVT.  The manual has the typical Honda feel with light clutch and mostly weightless throws to the shifter.

The smaller but mightier 1.5-liter I4 turbo outputs 174-horsepower and 162 lb-ft. of torque, but is available with a CVT only. It comes in the Touring model that we spent most of our time in at the San Diego press launch.

And without a doubt it is one spirited performer, with vastly improved handling compared to the previous gen. They probably didn’t go far enough for the fast and furious crowd, but there’s plenty for the average buyer to enjoy.

It can feel stiff over rough roads, but that’s the price you pay for the sharper handling that fans in this segment demand. 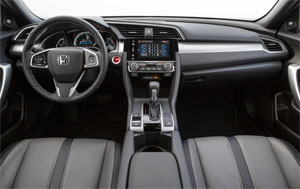 Steering is weightier than in the sedan, though that can partially be due to different tires and wheels; as the suspension itself, despite unique tuning, feels about the same. The Continuously Variable Transmission worked well with the little turbo, and never really annoys; save for the usual CVT shortcomings of highway merging and extended high speed runs.

Inside, there’s the same wide and uniform looking dash of the sedan, yet with a little more flair to be found. Gauges, like the sedan sibling, are now more traditional in their setup, but no less far reaching with plenty of digital readouts.

Controls on the steering wheel work well; which is a good thing, as here in the Touring trim there are not too many other buttons or knobs, just a screen with touch sensitive areas for controlling most everything.

The now necessary active safety systems such as Collision Mitigation Braking are available as part of Honda Sensing. And there’s even a standard electronic parking brake, freeing up console space from the tried and true handbrake handle.

Government Fuel Economy Ratings haven’t been finalized, but Honda puts the 1.5-turbo at 31-City, 41-Highway, and 35-Combined. The Energy Impact Score is expected to closely match the 1.5 sedan’s fine 9.4 barrels of oil consumed, and 4.2 tons of CO2 emitted yearly.

Look for Coupe pricing to start just under $20,000 for a base LX, or just a bit higher than the Sedan.

A big key to the long term success of the Honda Civic Coupe has been its ability to appeal equally to both eco-minded mature drivers, as well as boy racer wannabes, and just about everyone else in between.

While we all wait patiently for higher output Civics, and the new British built hatchback just teased at Geneva, the well done 20-16 Coupe sets a solid foundation for what is to come, giving the people what they expect in a sharp looking, up-to-date two-door, and then some.