So far, Hyundai has resisted taking a plunge into the rapidly expanding pool of pint-size subcompact crossovers. But, that’s understandable as their quart-size Tucson compact ute delivers a lot more space for about the same price. Well now there’s a new Tucson, and that more for less aptitude just got even bigger.

The Hyundai Tucson has been around long enough to play a major role in Hyundai’s growth, from upstart act to Broadway box office smash.

For 2016, introducing a little more razzle-dazzle to the audience is a good play, and one consistent with most recent Hyundais. The front looks very big and bold for a compact crossover ute, and there are lots of lines flowing from there to the rear.

It very much looks like a scaled down Santa Fe, and when in Limited trim, with 19-inch wheels and LED headlights, it should help reel in those “elusive but highly sought after” younger buyers. 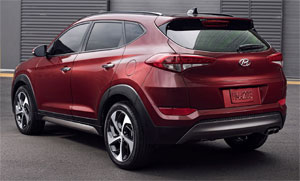 Dimensions have been stretched over last year, it’s both longer and wider; and of course that translates to more room in the cabin for both people and parcels.

It also adds a 7-speed Dual Clutch Transmission, while the 2.0-liter makes do with a traditional 6-speed auto.  Both engines can be had in front and lockable all-wheel drive with active cornering control.

At our test track, our turbo equipped Limited felt spirited, but far from muscular off the line; with trips to 60 taking a mundane 8.4-seconds. Torque is pretty good down low, running out of steam at the high end; but it’s certainly adequate for a compact ute. The ¼-mile pass took 16.5-seconds at 86 miles-per-hour. 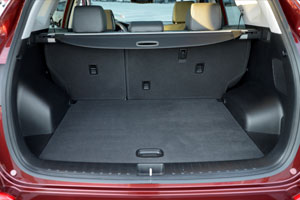 As for the DCT transmission, it proved adequate, with some occasional hesitations to get going from a stop. We also got a “high transmission temp” warning during our track day. Braking distances averaged a short 120-feet from 60; but with a long travel from the squishy pedal.

The chassis feels willing and able, with a composed non-floaty feel that’s more firm than plush. But during hard corners, the “traction control monster” awakens easily, keeping you from exploiting that feeling too much.

Taking in the scenery at a more relaxed pace, the ride is surprising enjoyable. It’s noticeably quieter and more compliant than before. The last Tucson was in a word “rough”. So Hyundai’s, increased attention to ride and handling is really paying off.

As for the ever-important drive environment inside, ergonomics are great, as is seat comfort.

The smooth looking IP is dominated by either a 5.0 or 8.0-inch center touchscreen. Hyundai’s infotainment system works well, among the best in the business, and includes a standard back-up camera. 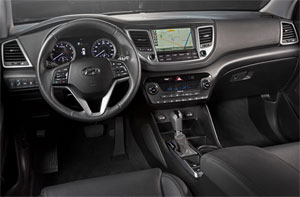 Despite numbers that indicate there’s a bit less legroom for rear seat passengers than before, it felt plenty roomy to us. And it enabled cargo space to go way up; now 31.0 cubic-ft. behind the standard split-folding rear seats, 61.9 cubic-ft. with them folded. That’s 20% more than the average subcompact ute.

Despite the small stature, there’s full size safety here; with an automatic emergency braking system that worked flawlessly in our barrier test. Sudden stops were abrupt enough to leave some skid marks on the pavement.

Government Fuel Economy Ratings are 24-City, 28-Highway, and 26-Combined. So our average of 26.8 miles-per-gallon of Regular was right on. The Energy Impact Score is about average for all vehicles at 12.7-barrels of oil use and 5.8 tons of CO2 emissions yearly.

Those higher admission prices do put a crimp in our rave review, as they are now a good deal more than a comparably equipped subcompact ute, while still less than the bestselling compacts. Still, the Tucson is fresher and better equipped. Star qualities that should impress both the critics and the masses; keeping Hyundai’s marquee shining bright.